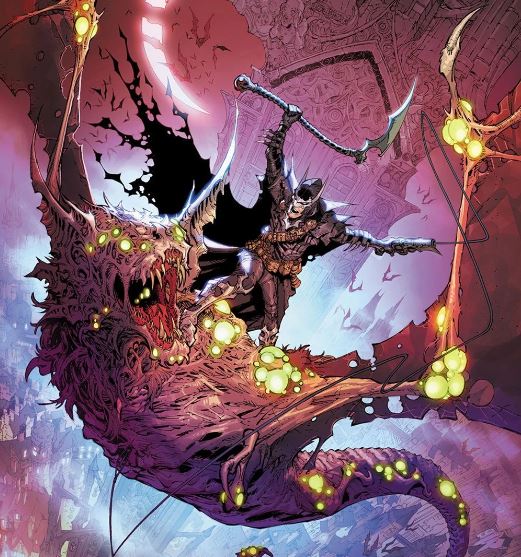 Synopsis: The first story in Batman: Urban Legends #20 is set in a Victorian Gothic framing as an omniscient narrator describes some of the horrors in Arkham Asylum as Batman swoops in on a crew of its demonic denizens. The narrator describes how Batman tried to capture the beings to restore their humanity but was unable to do so.

Commissioner Gordon arrives after the fight is finished. Kirk Langstrom is also on scene, as part of the Night Watch, and takes a sample from one of the bodies. He notices that Batman bears a wound from one of the beings.

Later, Bruce Wayne attends a party at Carmine Falcone’s dwelling. They talk and argue. When he arrives at Wayne Manor, he is greeted by Julia Pennyworth, who has taken over for a now-deceased Alfred. They go down to the Batcave to see what Langstrom has learned, and Bruce passes out from the wound. He awakens a day later in bed. He and Julia hear a noise from the Batcave and rush down to see Langstrom quaff a cylinder full of fluid he has developed from the sample. He transforms into Man-Bat, grabs Julia, and flies off into the night. Batman pursues.

Batman catches up, rescues Julia, and stabs Man-Bat in the chest. The narrator speaks of a god that rules Gotham known as “The Laughing One.”

Analysis: Meh. The Victorian Gothic framing feels artificial and contrived. The artwork is literally a mess. It appears there will be at least one more installment of this story, although hopefully, for the sake of this book, it appears elsewhere.

Story #2: Alfred in “The Pennyworth Files” Part 3 by writer and artist Chris Burnham

Synopsis: Alfred comes to the museum to warn the guards about a likely attack on the “Headless Mummy of Dagon.” Apparently, the Gotham City Police Department is too busy to assist.

They examine the artifacts on display, and Alfred locates the likely target. They begin to move it to a safer location but are accosted by the Black Harpoon. They are trying to locate the undersea temple of Dagon, which has riches. The final piece of the map is handled by brother “Nikolai,” who turns out to be the catfish being who then destroys the artifact in service of Dagon. Fighting breaks out.

The ghostly figure of Dagon emerges, and the combatants fall to a hush. The GCPD appears and apprehends everyone as Alfred removes the mask. Later, in the Batcave, Batman inquires as to whether Alfred needs the “Battorney.”

Analysis: ‘Should. I. Call. The. Battorney.’

This might well be the most ludicrous (not in a good way) piece of dialogue written in all of Urban Legends. And the Scooby-Doo ending really seems below the caliber of story-telling I expect in a TBU book targeted at adults. Alfred is excellent, but I do not think he is a good fit as the central protagonist, and this story is not doing anything to disabuse me.

Synopsis: A young Batman is caring for an injured Damian. Talia appears and informs Bruce that she is taking Damian home with her. She chastises Batman, and they begin to fight. Nightwing stops them, telling Talia that Damian’s injuries are his fault.

Talia and Batman stop fighting. She asks to see Damian. Alfred calls her upstairs. She bends over an unconscious, wounded Damian. She and Batman agree to try fighting less.

Analysis: This is a short, relatively kind, and gentle story. There is not much here, but I personally like seeing a more tender side to Talia that balances her ferocity (also on display here).

Synopsis: In the final story in Batman: Urban Legends #20, Commissioner Gordon and Batman are discussing the latest body, the fifth in a pattern. The victim experiences rotting flesh before flying into a psychopathic rage. Batman takes a sample but is not optimistic because his analyses have revealed nothing other than the one common link: All of the victims were extremely wealthy.

As he travels, Batman ponders the existence of a “Murder Club” in connection with the latest victim, steel magnate Conrad Wilmington V. Batman goes to his home and finds a clue that leads him to the Iceberg Lounge, where he questions Penguin.

At a gala thrown by the wealthy Nielsen family, Bruce Wayne attends. Anna Nielsen gives a speech and references the murder of her daughter, Liza. Alfred calls Bruce and begs him to rush back to Wayne Manor as soon as possible. Bruce rushes in and opens the door Alfred points out, and inside he sees his parents, who greet him.

Analysis: This is an intriguing detective story, although the twist at the end feels a bit cliché.

At least the editors and writers seem to be definitively moving away from the long serials that dragged the book down so much. That said, none of the four stories in this book shine, and the art is similarly underwhelming.