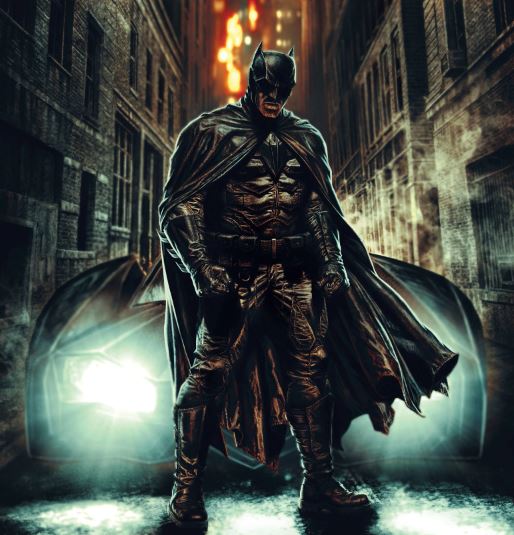 Overview: In Batman: Dear Detective, we see a collection of art pieces in a prestige format connected by a letter to the dark detective.

Synopsis (spoilers ahead): As a warning for those picking up Batman: Dear Detective, there is not much of a story to recap.  The book is a letter written to Batman interspersed with art pieces.

Batman receives a letter telling him to suit up.  The following two pages show Bruce Wayne donning the mask and armor of Batman.  In the next part, Batman is mocked, saying that he and the writer of the letter are really siblings, but he or she owns Gotham.  The following pages show Batman meeting with Gordon on the roof of GCPD and then driving off in the Batmobile.  The letter continues to mock Batman, he is always one step behind despite all the clues and riddles the writer leaves behind.  The next pages show Batman finding a dead body, but as he investigates, he is being watched.

Next, the letter mocks Batman’s costume, especially his cape.  Maybe Batman should be locked up himself.  Batman takes to his Bat bike. The writer then mocks Batman’s allies.  He accuses the Dark Knight of using them as bullets but lets it drop that they know that Batman’s parents were killed with a gun.  This is followed by art pieces featuring Batman and his allies, including two Robins and Batgirl.  The writer of the letter ponders that Batman is trying to identify the author.  This is followed by pieces showing Croc, Clayface, Catwoman,  Two-Face, a piece showing Scarecrow, Penguin, Mad Hatter, Poison Ivy, Ra’s and Talia al Ghul, followed by individual pieces of Riddler and Joker.

Analysis: There is not much of a story in Batman: Dear Detective.  The use of lettering does help with the mystery with the use of symbols replacing letters.  The final salutation is just some of the symbols, and after comparing the symbols, the actual author of the letter to the detective is “Crime” itself.  It is not a particular villain but the mission of Batman in general.  This makes sense.  Throughout the letter, the writer seems to accurately know the origin of Batman, which he keeps very close to himself.  The only villain who is not so much a villain that knows his identity consistently is Catwoman, and this is not her style.

Where a story is really lacking, the art is fantastic.  That is the purpose of this book but as a collection of art from Lee Bermejo.  Art it is, each piece is beautifully detailed in the different facial expressions and designs of the characters.  There is a distinct difference between Dick Grayson’s Robin and of Jason Todd.  I love the diversity in the characters.  The details of the character designs are brilliant.  The scars are realistic.  Bruce Wayne is scarred, and the Joker’s face looks like it has been cut into his mouth.  The detail in the costume makes it look like Bruce is wearing leather which is alluded to in the letter sprinkled throughout this piece.

This would make a terrific coffee table book for the art alone.  I look at it, and it reminds me of my favorite artist Alex Ross but a lot grittier and darker. Each piece looks like a painting and not just a drawing on the page.  What is gorgeous on the digital screen must be awe-inspiring on the printed page. This is not a comic book but an art book.