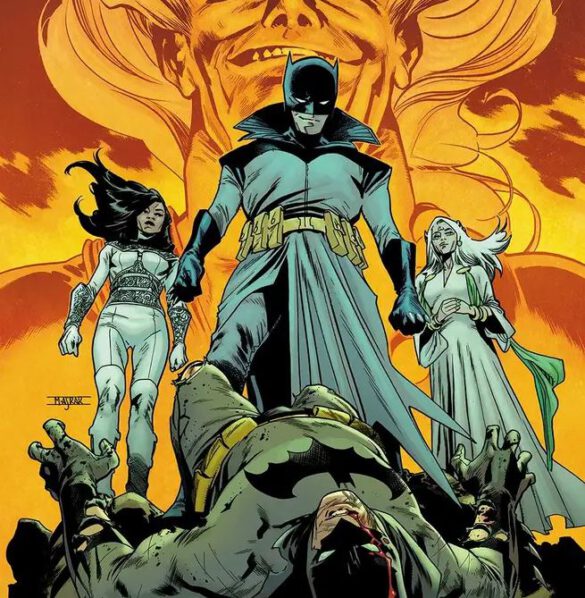 Overview: In Batman vs Robin #3, Batman must work his way through a trap set by his son, Damian Wayne.

Synopsis (spoilers ahead): Batman vs Robin #3 opens with Batman and Alfred Pennyworth using a Batplane left in an old hangar. Alfred seems to think Damian Wayne was unaware of the old hangar, but Batman disagrees, believing it was left on purpose. Batman is convinced that his son is trying to lure them to Lazarus Island.

Batman notes that the Bat-Family has been taken out, and he continues to fly toward the island, Mother Soul is watching, using Alfred as a vessel to see what the Dark Knight is up to. Meanwhile, Damian arms his mind-controlled Robins, giving the Cloak of Cagliostro to Tim Drake, the Trident of Poseidon to Jason Todd, the Coup-stick of Black Bison to Stephanie Brown, and the Sword of All Sins to Dick Grayson. Damian, wearing his Batman #666 attire, orders his Robins to their battle stations.

Once they’ve arrived, Batman orders Alfred to stay behind. He can’t dare to lose his trusted companion and father figure once more, so he rushes off alone.

Meanwhile, Talia al Ghul is running her affairs when Damian enters. Damian chastises her, calling her a bad mother and blaming her for raising him as a killing machine. Talia admits that she wasn’t always affectionate, but she doesn’t appreciate Damian’s tone. Damian demands that she prove herself when she says she’s changed. When he asks what she’s going to do, she’s silent. He leaves her, giving her time to reconsider, cluing her into the fact that she’s actually in a mental prison, her body strung up on Lazarus Island.

Out in the jungle, Batman is attacked by Tim Drake. Tim, under mind control, lays bare his feelings. He felt abandoned by Bruce Wayne once Damian came onto the scene. Tim uses the cloak to conceal himself, but Batman takes down Drake with ease. Though less physical, the weight of Tim’s baggage weighs heavily on Batman’s mind.

Inside Lazarus Island, Mother Soul has Black Alice drain the magic from the Queen of Fables and transfer it into the helmet of Dr. Fate. Mother Soul then greets their new arrival. It’s Pigsy from The Monkey Prince, the mentor of the titular hero. Pigsy reveals that Devil Nezha isn’t playing offense. The villain is actually playing defense, protecting himself from a son who has already arrived on Earth.

Meanwhile, Batman is attacked by vines that move at the whim of Stephanie Brown’s coup-stick. He escapes and rushes out of the thick of the jungle toward the beach. Stephanie pursues Batman, letting lose her feelings of how Batman never took her seriously. Batman admits to himself that he was impatient, but he also knows that Barbara Gordon has taken Stephanie in, if only because she has more patience than him.

When Batman pieces together Damian’s plan, he realizes too late that Stephanie was pitted against him second because she had a partner. Jason Todd leaps in with the Trident of Poseidon, hitting Batman with ocean waves once the hero makes it to the shoreline.

Jason blames Batman for not seeking him out after Jason’s resurrection. When Batman tries to say it’s because Jason came back as a criminal at first, Jason cries out that he wasn’t in his right mind.

As Batman battles Jason, he thinks about why he didn’t make Jason his priority, wondering if it was because of fear that he let a ward of his become a Joe Chill. Batman takes down Jason and Stephanie, moving on to the final opponent.

Inside Lazarus Island, Pigsy asks Damian what the current Robin gets out of all of this. Before Damian answers, Pigsy reveals that Devil Nezha wants to enslave Earth and build an army in order to fight a greater demon named King Fire Bull. Pigsy then asks what Mother Soul gets out of this, to which Damian replies, “Scorched Earth.”

Pigsy then tells Damian that Nezha used to be a hero, but the Lazarus juice corrupted him. When Robin asks if it can be reversed, Devil Nezha attacks and seals Pigsy’s mouth shut.

At a cavern entrance, Batman finds Nightwing waiting for him. Alfred arrives, saying that he could wait no longer. Nightwing attacks Batman with the Sword of All Sins, lamenting that Batman took him in and hid Dick Grayson from the joy of recognition as a circus performer, making him Robin instead.

Batman, taken aback, contemplates what Dick said, thinking himself a monster. Then he realizes that it’s the sword. It’s Azrael’s sword, and it manifests guilt and doubts, magnifying them in the minds of opponents. Nightwing gets the upper hand on Batman, slicing him. Batman grabs Alfred and shields himself with his butler.

Alfred is sliced through the midsection, and Nightwing is mortified. But Batman has long known that Alfred is a spy. A demon bursts forth from Alfred’s body, flying away. Yet, Alfred is still alive. He calls to Bruce, and Bruce is horrified that he killed his father figure.

Batman cradles Alfred, telling his father figure how much he misses him.

All goes quiet. Batman is alone. He patches himself up and enters the cavern.

Analysis: Batman vs Robin #3 has floundered in previous issues, but it’s in this third installment that the series finds the solid ground to stand upon. In this issue, Damian pits mind-controlled former Robins up against Batman. One-by-one, Batman is assaulted by them both in their ferocious physicality and in their inner pain and weaknesses. Each former Robin, Tim Drake, Stephanie Brown, Jason Todd, and Dick Grayson, have their own pains to share with Bruce Wayne, and he must battle against them while taking to heart the words they have to share.

In the final battle with Dick Grayson, Batman realizes that it’s all a ruse and one big manipulation. Dick has been carrying the Sword of All Sins, which manifests guilt in its opponents. This has been a game to break Bruce, but it’s over. When Dick strikes, Batman shields himself with a possessed Alfred, freeing his father figure’s soul from the demon that’s hijacked it.

This issue takes a step away from the over-the-top, magic-based battle for world domination to give readers a touching moment between Alfred’s soul and Batman. It’s beautiful, heartfelt, and sincere. Alfred, in a very father-like way, demands that Bruce stop blaming himself for what happened during “City of Bane.” Alfred tells Bruce that he knew the risks and that he exercised his own free agency. It’s not Batman’s fault, nor was it ever.

The battle leading up to his moment was rife with emotion from the former Robins, much of which has already been dealt with. At first, it’s confusing, and for longtime readers, fans might be wondering why we’re having Batman rehash feelings he’s already dealt with when it comes to other members of the Bat-Family. There’s a magical explanation for that, but really, these moments are just the primer for the big finale with Alfred.

In this finale of Batman vs Robin #3, Batman finally gets to tell Alfred’s soul directly that he misses him. Cradling his father figure in his arms, Bruce holds Alfred close as Alfred’s soul fades back to the netherworld.

The paneling by Mahmud Asrar is appropriately moving and emotional. At first, readers see a lot of Bruce’s face as he talks with Alfred, but this gives way to a large, one-page spread of Bruce on his knees, alone in a large, open, and empty space. Jordie Bellaire’s colors cast a peaceful blue over everything, leaning into the serenity and love Alfred wishes to impart to his former ward, Bruce.

Afterward, Bruce pulls himself back together and marches forward into the deep caverns of Lazarus Island. Alfred has forgiven him. Now, it’s time for him to forgive his son.

As much as there were other reveals that happened in this issue, like Nezha turning out to be fearful of an even greater threat, this is the big moment. This is the heart that’s been missing from Batman vs. Robin thus far. One can only hope that it continues and takes readers on an even more emotional journey of fathers and sons.

Batman vs Robin #3 finally finds that warm, soulful, heartfelt center that it has been sorely lacking in the last couple of issues. It’s beautiful and might bring a few readers to tears.