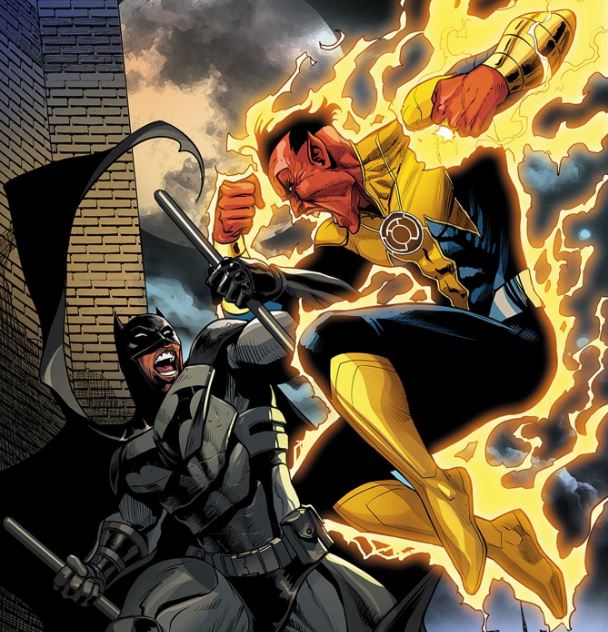 Overview: In I Am Batman #15, Batman faces his fear and this experience leads him to join the Justice League in the face of the dark Crisis.

Synopsis (spoilers ahead): I Am Batman #15 picks up where the previous issue ended.  Batman is standing over the body of Detective Whitaker, the man Batman beat to death.  Chubb tells the vigilante that he has to run just as he ran from Gotham and Superman.  Batman realizes that he cannot run from this and asks Chubb to arrest him.  Instead, she gives him her gun and tells her to shoot himself in the head.

The scene quickly shifts to a Batman on his knees, grabbing for Chubb’s gun.  Whitaker is very much alive.  Batman realizes that the entire incident happened in his head.  He jumps on his bike and races off.  Lost in his thoughts, he is almost run over by a car.  He sticks and pleads for the driver to help him, but the driver drives off without saying a word.  Instead a bystander, Enrique hands Batman a knife.  He wants Batman to use the knife to kill himself.  The man then morphs into Sinestro.  Sinestro tells the knight that he is there to kill him.  Batman throws the knife at the Yellow Lantern, who catches it and levitates and throws Batman into a truck.  He then creates a knife construct and aims it at Batman’s eye.  Sinestro flies off, leaving a confused and scared Batman.

At the base, Batman tends to his wounds and talks to Vol about his encounter. Vol informs Jace that Deathstroke has contracted hits on various heroes.  Sinestro got the contract on Jace.  Vol urges Jace to get help.  Jace tells his friend that Superman is not going to help him; after all, he turned his back on Jon Kent when he asked Jace to join the new Justice League.  Batman has to face his fears and Sinestro.

Pariah is in contact with Sinestro.  He berates the leader of the Yellow Lanterns for allowing Batman to escape.  It is revealed that Pariah was the one that chose Sinestro to hunt down Batman.  Pariah wants the Batman of New York dead.

In Hells Kitchen, Vol contacts Batman, he is detecting an energy spike around him.  Soon Jace is face to face with Bruce Wayne.  He is not really talking to the Batman of Gotham but Sinestro. Sinestro reveals that he has Hadiyah.  He is going to use her to convince Batman to kill himself.  Sinestro hands Batman a glowing yellow object.  Batman takes the object, and his right arm gets coated in a Yellow construct glove and gauntlet.  He then attacks Sinestro.  He knows that Hadiyah was not real.  She does not bet, and she is afraid of nothing. Batman announces that neither is he and pounds Sinestro to a pulp.  Pariah, as punishment for Sinestro’s failure, takes him.

Analysis: I Am Batman #15 is a great tie-in to the Dark Crisis event.  Where I was concerned last month, this issue alleviated those fears for me.  This is a great stand-alone story that I would have loved to have seen fleshed out a little more.  I admit I am an old Green Lantern fan, and this story examines the concept of the emotional spectrum especially fear.  Other than Sinestro not having any connection with Jace Fox, which is mentioned in the issue, it is interesting to pit fear against this version of Batman.

The main problem I have is with Sinestro and this whole Pariah gathering the villains to fight the heroes.  What hold does Pariah have over beings like Sinestro that allows him to control these characters?  My remembrance of Pariah is not this powerful villain but a tragic individual who was forced to watch the deaths of worlds.  What power does he have, and does it have something to do with the harness that Sinestro is shown wearing along will the other villains shown on the final page, including a character I do not consider a villain, the Spectre?

I also do not believe that Sinestro has the ability to control thoughts, and this story clearly shows that he has this ability as well.

The story in I Am Batman #15 is also a coming-of-age story for Jace Fox’s Batman.  Jace realizes the error he made in abandoning Superman to focus on what he considered a true crime to be.  Jace here starts to see a larger picture of his actions that might have been awakened in working with Question in the previous issues.  Batman is learning to see that there truly is more at stake than street crime, and he has to stand up with other heroes to battle the larger threats as well as tackle the street-level threats.  I do picture Batman as more of a street-level hero, but there are times when that focus has to be expanded, and the Dark Crisis is one of those times.

The art continues to be great.  There are some very dynamic panels in this book.  One of the most striking is the panel showing Batman standing over the fallen Sinestro with the speech bubble “I Am Batman” with the Bat symbol shown in the negative space.

The visual for the shape-shifting Sinestro is an interesting choice.  It basically is the character twisting in front of the eyes of Batman.  It is a great visual of Sinestro’s ability to twist reality.  Reality itself does not twist just Sinestro.  It could symbolize that Sinestro himself believes that he is real.

This is a great read, even for those not immersed in the Dark Crisis saga that I am definitely not following at the moment.   It ties the story to the event for those that are invested, but in addition, it is a great character piece that shows character development in the titular character and shows his ability to own up to the fact that he can be wrong.