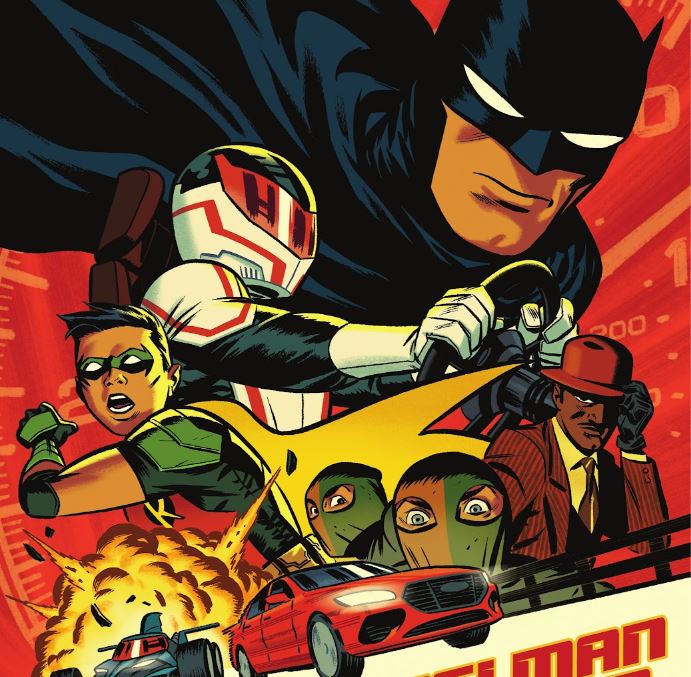 Story #1: Batman and Robin in “The Wheelman of Gotham” by writer Anthony Falcone and artist Michael Cho

Synopsis: The first story in Batman: Urban Legends #21 focuses on the Dynamic Duo in the Batmobile chasing a sedan with three Rogues inside. Robin is puzzled why the Batmobile cannot seem to overtake the car, and they end up crashing.

Three days later, they find the torched getaway car and, after running tests in the Batcave, can find nothing special that would explain its performance. Batman deduces the difference-maker must be the driver rather than the car.

Under a deserted pier, the driver meets a representative of her sponsor. They plan the next job as he holds up a defaced coin.

Back at the Batcave, the Dynamic Duo discerns a “speed force energy signature” on each car involved in the series of robberies they are investigating. Kid Flash shows up to help build a new Batmobile. Batman then shows the team the completed Batmobile, which is designed to counter the abilities of our Rogue (now named Getaway). Much to the Caped Crusader’s disapproval, Robin names it the “Bat-Bolt.” The Duo scream out of the Batcave and pick up Getaway quickly. Batman is pleased with the upgrades and is able to stay close to the fleeing car.

However, Getaway performs a difficult maneuver that forces Batman into a mistake that costs him a second Batmobile. He lands on the roof of the villains’ car and is able to position Getaway into a crash from which he glides away. He apprehends Getaway, who turns out to be Hae-Jin “Grace” Lee. The story ends with her ruminating on her path from inside a Gotham prison.

Analysis: This isn’t the most compelling story. The Bat-Bolt is cool, but we only get to enjoy it for a few panels before the Dark Knight wrecks it. Hae-Jin “Grace” Lee does seem like an interesting Rogue, but the story remains somewhat flat.

Synopsis: The second story in Batman: Urban Legends #21 sees Detective Renee Montoya walking home when she finds two uniformed officers manhandling a suspect. She intervenes, and the suspect criticizes her collusion with an unjust criminal system. Eventually, the aggressors grow disgruntled and leave.

Detective Montoya explains that as a young officer, she quickly apprehended the injustice centered on arrest quotas. She resisted by issuing arrests she knew were illegal, such that charges would be dismissed. Batwoman realizes the vulnerability and softens, as they both admit talking was not always their primary shared interest.

Later, Detective Montoya resolves the difference of opinion with one of the two uniformed officers. A new era dawns.

Analysis: The highlight of this story is the rich, spicy conversation between Detective Montoya and Batwoman. I love Kate Kane as a character, and here the dialogue is wrought in ways that highlight her brilliance. The centering of their relationship is also handled well, and the conversation is neither treacly nor unidimensional.

I think more TBU stories centering on the Montoya-Kane dynamic are welcome. The characters can bear the weight, and Batwoman herself is a serious bad@rse. Speaking as a Jewish person, it is terrific to see Jewish representation in DC Universe and the Bat-Family, especially given the role Jewish people have played in shaping Batman and TBU. Now is a time when my community needs to see and be seen. Representation matters.

Synopsis: The next story in Batman: Urban Legends #21 sees Mr. Caldwell sentenced to Arkham Academy. Caldwell, the son of a supervillain named Wrath, meets his cellmate “L’il Kitten.” He protests his innocence. Kitten is skeptical. He shows Caldwell around and introduces the rest of the gang. At the state home, the group meets criminal psychologist Dr. Olivia Otus. In the classroom, Dr. Otus teaches the youngsters a lesson using Killer Croc.

Analysis: The progeny of supervillains, eh? Plus, I think with Scarecrow (Jonathan Crane), the underrated Mad Hatter (Jervis Tetch), Poison Ivy (Pam Isley), and Man-Bat (Kirk Langstrom) I think we are full up on evil scientist Rogues.

Synopsis: The final story in Batman: Urban Legends #21 has Bruce Wayne stalking away from Alfred and two adults in a room in Wayne Manor. Alfred rushes after him, insisting that the couple in the room are Thomas and Martha. Bruce refuses to entertain the notion. In the Batcave, Batman assembles with Nightwing and Robin (Damian Wayne). For once, the trinity is in agreement that the imposters must be exposed.

Back at Wayne Manor, Thomas grows angry with Alfred and demands an explanation. Alfred concedes that he, too, would like an accounting. In the Batcave, Batman gives Nightwing instructions and tells Robin to stay put. They rush off.

Damian goes to speak with Thomas. He explains who Batman is and his signal importance to the world and to him personally. Thomas appreciates the explanation but insists that earlier that morning, Bruce was eight years old. And now, this? They are reaching for answers.

Nightwing comms Batman and explains that genuine time travel is occurring. The source is pinpointed to Crime Alley, Grudgingly, Batman sets off for the one spot in Gotham in which he is less than fully comfortable. He pieces the clues together and manages to apprehend Johnny Starr, aka the “Time Commander.”

Back at Wayne Manor, Thomas and Wayne discover the secret of the grandfather clock and descend into the Batcave. Batman, at the Batcomputer, sees a 100% DNA match and tells Alfred he owes him an apology.

Analysis: This detective story is modest, but it is satisfying to see Nightwing, Alfred, and Damian pulling together. Damian’s robust defense of his father is a subtle but effective reminder of the complexity of his character; his loyalty to his comrades and to his parents is rarely in doubt. Thomas and Martha are rendered skillfully enough. Thomas’s easy discovery of the grandfather clock is significant because, in some of the origin tales, that exact spot is chosen for a reason: It is where Bruce told his father he would become a bat.

Nightwing merits more attention in the remaining two issues, but I do agree that there is enough here to warrant a three to four part series. If original, it’s usually compelling to see four of the closest members of the Bat-Family converging like this.

The book remains uneven, but the peaks are higher here than in many previous issues. The Montoya-Batwoman story succeeds, and other than the “Arkham Academy” story, the others have strengths as well. The overall quality of the artwork is not topline; however – the linework is muddy, and the Golden Age overtones sometimes jar.