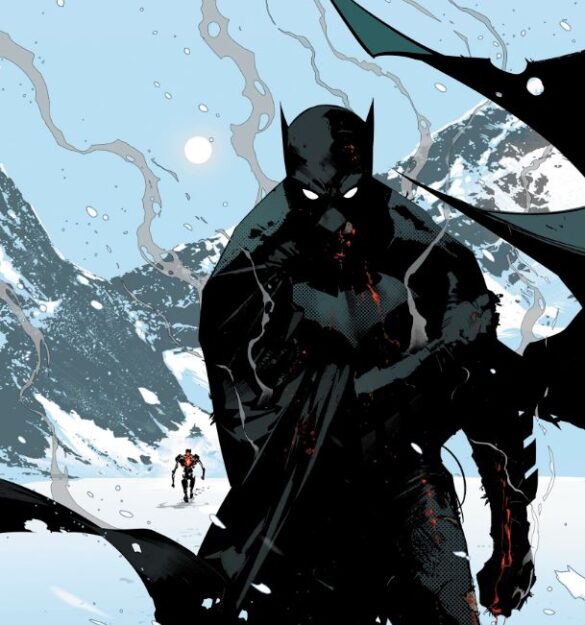 Overview: In Batman #130, Batman and Failsafe have their final showdown, and only one of them walks away.

Synopsis: As Batman #130 begins, Batman, who is floating in space after the explosive events of Batman #129, resupplies his oxygen from a damaged Justice League ship, then hurtles toward Earth. He uses his oxygen supply for jet propulsion, and once Batman enters the gravitational pull, he plummets fast.

Batman’s suit is heat-resistant, but his oxygen mask isn’t. He rips off his trunks and covers his mask to protect it, his suit lighting up as the hero descends through Earth’s atmosphere.

Batman crash-lands near the Fortress of Solitude, which awakens Superman from his stasis. Robin (Tim Drake) tries to keep Superman from climbing out of his stasis pod, but it’s no use. Once Batman enters the fortress, he asks for Superman’s help as a diversion. Failsafe is coming.

Superman dons a special suit and meets Failsafe out in the snow. The two battle, with Failsafe quickly pointing out Superman’s weak points and using them against the Big Blue.

Inside the fortress, Batman plans with Robin. On the moon, he used a New Genesis weapon to blow a hole in Failsafe’s back. While Batman can’t destroy the machine from the inside because Failsafe is impervious, he can use nanotechnology to infect and slowly alter Failsafe’s personality.

Batman thinks back to his nightmare of Joker murdering Tim, then collects himself. Failsafe is designed to be as good as, if not better than Batman at everything, but Failsafe lacks the dynamic duo that is Batman and Robin.

Outside, Failsafe has defeated Superman. Batman and Robin enter the fight, and Batman notes that Tim was the best at teamwork, at fighting in sync with Batman. When the opportunity arises, Batman infects Failsafe with nanobots, inserting compassion into the machine’s programming. Failsafe then rushes to the Fortress of Solitude and picks up a weapon.

Batman realizes that he’s failed, and soon Failsafe returns, blasting Batman to nothing. There’s nothing but scorched snow in Batman’s wake, and Robin falls to the ground, sobbing. Failsafe’s mission is accomplished, and it ends its program, flying off into the cold, gray, snowy skies.

Analysis: Batman #130, and the entirety of the Failsafe arc, is an exercise in maximalism. It’s an overwhelming of the senses, a dazzling display of Batman’s calculating mind moving at a mile-per-minute in response to a more powerful threat. There’s no time to breathe with Failsafe, and for six issues, readers have read their hero thrown into a relentless gauntlet where Batman tries to stay a step or two ahead, but eventually, he’s overwhelmed.

For Batman, Failsafe is an onslaught. For readers, the frenetic, nonstop leap from one action scene to the next is also an onslaught. We’re overwhelmed as much as the Caped Crusader is, hit at every side with crazy and beautiful visuals from artist Jorge Jimenez and colorist Tomeu Morey. Writer Chip Zdarsky scatters moments of fear, emotion, and heart from Batman, which pulls at our heartstrings as our Dark Knight worries about who he’s become and how it’s negatively affected his family and friends.

The Failsafe arc wants to be everything, and it’s certainly an intense launching point for a new creative team. The length the creative team goes to overwhelm readers with insane visuals, taking them along for a ride throughout Gotham, deep down to Atlantis, and all the way to the moon, is note-worthy. It also makes this arc extremely difficult to review. It’s a beautiful and fun book, but will I remember it in several months? Maybe. Maybe not.

I also don’t know how I feel about the ending. Shortly before his “death,” Batman lets it be known that Tim Drake is the best team player. This seems to be a not-so-subtle clue that the sobbing and anguish Robin goes through a few pages later is merely play-acting. The plan Batman and Robin concocted was for Batman to fake his own death, and Failsafe would be none-the-wiser.

At first thought, it’s definitely an exit point that may have worked earlier in this arc, before all the destruction and Batman’s extended stay in Atlantis. With how many weapons and tricks Batman threw at Failsafe and how easily Failsafe seemed to dodge everything, it seems weird that Failsafe would accept this and not do a scan. Perhaps this is why Batman had to infect Failsafe with nanobots.

Either way, the rollercoaster ride jerks to a halt—the doors of the coaster open. Readers can finally exit, left in a daze, wondering whether or not they enjoyed it.

Story #2: “I Am a Gun” Part 3 by writer Chip Zdarsky and artist Leonardo Romero

Synopsis: The backup in Batman #130 sees Batman of Zur-En-Arrh wail on the Joker while the real Batman watches from a mental prison. Bruce Wayne didn’t intend for Zur-En-Arrh to assume control, to take the reins and rid the Clown Prince of Crime once and for all.

Inside his mind, Bruce argues with this killer Batman. Zur-En-Arrh argues that killing rogues saves lives, but Bruce then envisions a version of Joker trapped inside the mind of that garish exterior. There’s a broken personality in there, one who has lost control and is asking to be saved. Bruce then sees his own mother, and she tells him that he’s not a killer and that Zur-En-Arrh is nothing but hollow anger.

Bruce assumes control once again and saves the Joker. He returns to the Batcave and finishes the Zur protocol, reminding himself that he’s the most dangerous man alive and can’t succumb to darkness. It scares Batman, and as a reminder, perhaps, he adopts the gold emblem on his chest before going out on patrol with Robin (Dick Grayson).

Analysis: This backup continues the “origin story” of Zur-En-Arrh, and it’s an interesting take on Batman’s no-kill theory. More than that, it’s an unveiling of what scares Batman, as well as a glimpse into why Batman still hasn’t killed the Joker. The idea that Bruce thinks there’s a trapped personality lost within Joker is interesting. Unfortunately, this backup ends here in Batman #130 and is extremely short, so there wasn’t much depth to this idea. Still, it’s fascinating, and it’d be great to see this thread explored further.

Batman #130 sees the finale of the Failsafe arc, and whether or not it’s a solid ending is entirely dependent on how much readers love rollercoasters.