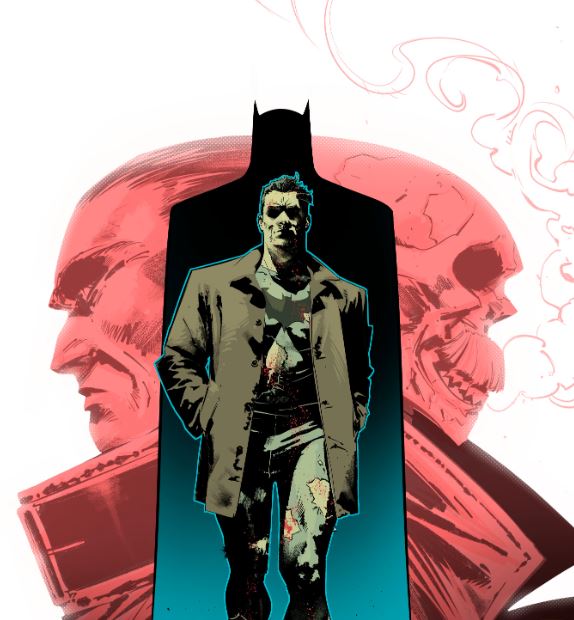 Overview: In Batman #131, Batman wakes up in another Gotham City somewhere in the multiverse.

Synopsis: Batman #131 begins in Crime Alley, as a bloodied Batman lies unconscious. Two drug addicts steal his utility belt and runoff. He awakens, remembering Robin (Tim Drake) watching him as Failsafe blasts him outside the Fortress of Solitude (see the conclusion to the Failsafe arc in Batman #130).

As Batman climbs to his feet, a skeleton Jim Gordon greets him. Every thought that Batman has, Jim answers, revealing himself as potentially a figment of Batman’s imagination.

Batman quickly deduces that he must be suffering from some multiverse poisoning. He finds a change of clothes, and while hunting for clues, Batman notices that his brownstone has been abandoned for years. He also sees that Wayne Tower is something else entirely.

Bruce Wayne hears a scream across the street. Cops are swarming an apartment, and a large figure in a black trenchcoat sedates a woman for arguing with him. The figure walks down the hall to another apartment and kicks in the door. He asks the resident if the resident is sane or insane, then raises his gun. Bruce leaps to action, pulling this figure back into the wall.

Quickly, Bruce realizes that this cloaked figure is using venom. The two battle and Bruce realizes that he’s facing off against Judge Harvey Dent. As Bruce works to neutralize Dent and the GCPD officers, Firefly hovers outside a window, unleashing a fury of flames.

Bruce saves an elderly woman from Firefly’s flames, but before he can escape himself, Judge Dent grabs him. Dent tosses Bruce across the room, gaining the upper hand now. As the two battle, a child whips two tiny daggers at Dent. The child saves Bruce, and as the two escape the apartment building, Bruce returns the favor by saving the child.

The child leads Bruce to a car and then drives the two of them off to safety. Bruce, wounded from a gunshot, is left wondering if this world’s Batman is dead.

Elsewhere in this world’s Gotham City, mob boss Selina Kyle claws one of her goon’s faces for robbing her and bragging about it. Selina receives a phone call from a man in a red mask, who tells her that her new top priority is finding this new Bruce Wayne. She can hardly believe it since Bruce is dead, but she gets to work.

When the man in the red mask hangs up the phone, he says loudly that he’s been waiting for Bruce to appear. Behind him, many patients are strapped to medical beds, their bodies showing signs of different levels of stress and dismemberment.

At a secret hideout, Julia (or “Jewel” as she goes by), the child who saved Bruce, helps Bruce patch himself up. Bruce realizes that Jewel, like himself, is an orphan. It’s then that he understands why Failsafe brought him here. When Batman and Robin reprogrammed Failsafe with compassion (see the last issue), Failsafe’s parting gift was to send Bruce to a Gotham without a Batman.

Analysis: Batman #131 is surprising. After the Failsafe arc ended last issue, it may have felt natural to assume that writer Chip Zdarsky and artist Mike Hawthorne would leap into a completely different story, one that keeps Batman on the shelf for a few issues. Instead, readers are treated to a continuation that finds Batman in another Gotham City.

A big, scary, mountainous Judge Harvey Dent, presides as the swift arm of the law, using black-and-white thinking to make snap decisions about whether residents of an apartment complex are innocent or guilty. Though Bruce fails to halt Dent, he meets with Jewel, and his appearance has already caught the attention of a crime lord Selina Kyle and a shadowy figure in a white cloak and red mask.

What’s interesting about this arc is that not only does it propel Batman into another world, but it does so directly after an arc and corresponding backup storyline that involved the Batman of Zur-En-Arrh. Batman of Zur-En-Arrh, originally, was a Batman in another world in Batman #113. During Grant Morrison’s run on the Batman title, the moniker was used as a “failsafe” personality for Batman should he ever find himself mentally compromised. Chip Zdarsky and last arc’s artist Jorge Jimenez carried on with this tradition, using Zur-En-Arrh as an alternate personality that created Failsafe, who proved to be an even colder, more mechanical (literally) Batman.

When Batman and Robin infected Failsafe with nanotech that reprogrammed it with compassion, it seemingly sent Batman to this Gotham City, one that lost its Bruce Wayne many years ago. The cycle of alternate Batmen is what’s interesting here, as the real Batman now finds himself in a Gotham that needs him and one that will allow him to reinvent his identity. Beneath the surface, Zdarsky and Hawthorne continue to tinker with this idea of identity, alternate selves, and what it means to be Batman.

For argument’s sake, this Gotham has its version of the vigilante in Judge Dent. Dent, however, is more akin to the Punisher, sporting a similar garb and a penchant for guns and using violence and murderous intent to keep law and order in Gotham. One can presume that Bruce will serve as a counterbalance to Judge Dent, struggling once more to save Harvey from Harvey’s worst impulses.

The art in Batman #131 is fantastic. Jumping onto the title after Jimenez isn’t easy, but Hawthorne’s style is frenetic yet easy to follow. The paneling and action flow very well, and Hawthorne does a great job designing Judge Dent as a Mr. Hyde-like mirror of Bruce. Dent’s eyes are empty and vampiric, and near the end of their fight, a strand of Dent’s black hair falls mid-forehead while he rages at Bruce and us, the readers. In this particular panel on page 17, even Dent’s hair matches Bruce’s.

Tomeu Morey stays on the title, delivering those absolutely stunning colors readers can always count on. Paired with Hawthorne’s pencils, there’s a moodiness to Gotham that’s haunting and beautiful.

In the final panel, readers are treated to a horrific display as this red-masked figure leaves a room where patients have clearly been tortured. Judging by the build of this white-cloaked figure, it might be this world’s Tim Drake, which would make sense given the previous arc’s focus on Batman’s relationship with Tim. Time will tell.

Synopsis: As the backup in Batman #131 begins in a retro-style home kitchen with a mannequin wife and child, a strange man notes that Superman and Arkham are gone, which frees him from his shackles. He plays with action figures of Superman and Batman on his kitchen table, plotting his domination.

In the “Batacombs” beneath Gotham City, Robin (Tim Drake) goes over the fight with Failsafe, trying to figure out what happened to Batman. Jonathan Kent is there for moral support, though he feels unhelpful as Tim pieces together that Failsafe destroyed the weapon it fired to prevent Batman from returning to this world.

Robin puts on his helmet and hops on his motorcycle. He will stop some crimes while he processes how to save Batman.

Elsewhere, Cutup and his henchmen hold a rich couple for ransom. Nightwing leaps into action, taunting Jeff (Cutup’s real name) for pretending to be the Joker while the real deal is out of town. Robin drops in, assisting with the hostage situation.

Nightwing and Robin talk about Batman’s disappearance. Word has spread, and guys like Cutup think it’s their moment to step up and take control of Gotham. Robin pushes for help in finding Batman, but Nightwing pushes back. Dick Grayson has seen this before, and Batman will be back. He believes the Bat-Family should keep Gotham together until Batman resurfaces. Robin disagrees and abruptly leaves.

It’s then that Robin is contacted by Jonathan Kent. It appears that Toyman has committed suicide, and there’s a mystery afoot.

Analysis: Having backups written by the main story’s writer continues to be a blast. This backup in Batman #131 directly ties into the previous arc’s ending as a parallel narrative to Batman’s adventures in another world. Readers see Tim Drake on the verge of losing himself. Tim pushes his allies away, digging deeper into his obsession with finding Batman. If one were to assume that the red-masked figure in the other Gotham is Tim, then Tim’s breakdown in the real Gotham could be a precursor to what happens to a Gotham where Batman has been lost.

Batman #131 sees the launch of an exciting and refreshing Batman adventure that gives off serious Grant Morrison Batman vibes (in a good way).