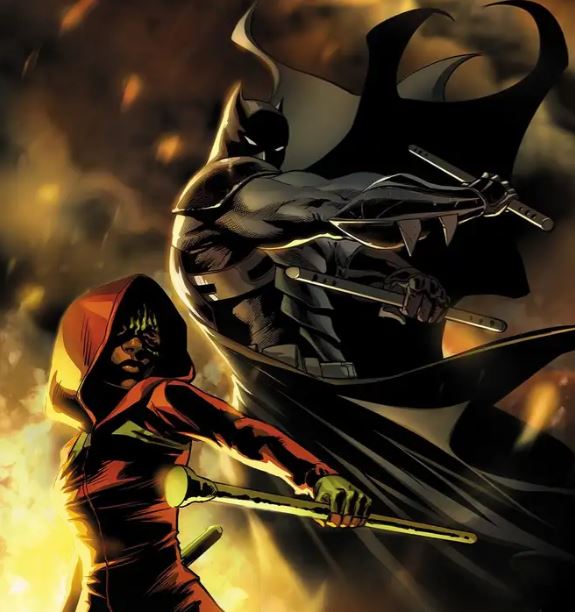 Overview: In I Am Batman #17, given the recent revelations, Jace struggles with his identity, while a woman’s life hangs in the balance.

Synopsis (spoilers ahead): I Am Batman #17 picks up immediately after the end of the last issue. Jace is trying to come to terms with the fact that the woman who raised him may not be his biological mother.  Lucius confesses that he had an affair with Elena Aoki.  Jace is furious, and he lashes out at his father, saying that he took advantage of a subordinate.  Elena was unable to care for a child.  Lucius confessed to Tanya, and along with Lucius, they decided to raise the baby as their own.  Tam admits to Jace that she also knew Jace’s true parentage.

Tanya steps in and tells Jace that he was always treated as a family member.  Jace is not ready to hear any of this, and he packs some things and decides to leave.  Tiff follows him and tries to talk to him.  Jace still does not want to hear any of this and states that even Elena’s predicament is not his problem.

The other three members of the Fox family discuss the situation, including Jace and the ransom money for Elena.  Lucius does not want to capitulate to the terrorists, and Tam tells them that they should have told Jace and not forced her to secrecy.

Elsewhere, Jace gets a call from Hadiyah.  Hadiyah calls to find out what is going on, but Jace doesn’t know how to explain it to her. He lashes out, saying that the woman who is not on the phone with him now has no time for him, and he hangs up on her.

Tiffany arrives at Batman’s base.  She meets with Vol.  She tells him that she knows that Jace is Batman.  Vol counters that Jace told him that Tiff is trying to be his sidekick.  Tiff changes the subject to focus on the hostage situation.  She tells Vol that Batman is not coming and she wants to help find Ezekiel King.

After gaining some basic intel, she meets with Chubb in costume.  She strikes a deal; she will go in to free the hostage while the cops deal with King.  Chubb gives her five minutes and hands her a phone.  Tiff heads off to carry out her part of the plan.

Hadiyah calls Vol.  She tells him that she knows everything except where Jace is.

Tiff makes her move, but she discovers that Batman has followed her.  Tiff calls Chubb and tells her that Batman is with her and they are moving on the plan.  King orders his people to kill Elena, and Batman and Tiff strike.  King calls back up, and the two heroes are quickly overwhelmed.  Outside, the cops take fire.  King holds a gun at Batman’s head, and suddenly the room is filled with smoke.  Another masked vigilante calling herself “Nobody” arrives.

Analysis: The art in I Am Batman #17 is the standard superhero style.  Very good, but not a lot of wow.  I want to say the Rex Lokus on colors did a fantastic job with the smoke effect.  It helps the character of Nobody stand out on the final splash page.

Who Nobody is, is anyone’s guess.  From the design, it appears that the character is female, but interestingly all of the skin and hair is covered.  My initial thought is that this might be Hadiyah.  She could be wearing a head scarf that he is shown wearing all the time in her civilian presentation.  She did ask where Jace was, stating that she, in essence, knows that Jace is Batman.

The main theme of this story, I feel, is the question of identity.  Is a person’s identity tied to who they were born as, or is it more than that?  Jace comments that he is not a member of the family because his mother is not the matriarch of the Fox family.  Tanya tells Jace that she treated him as her son even though she did not give birth to him.  Jace, in his anger and immaturity, rejects that argument, but in the end, he appears to do the right thing by joining his younger sister in trying to free the hostage.

This Batman may not have lost his parents, but he appears to have his fair share of family drama.

This story helps us get deeper into the lives of the Fox family and at the same time allows for more character growth in the main protagonist.  It appears that another masked hero is now in New York in Nobody.