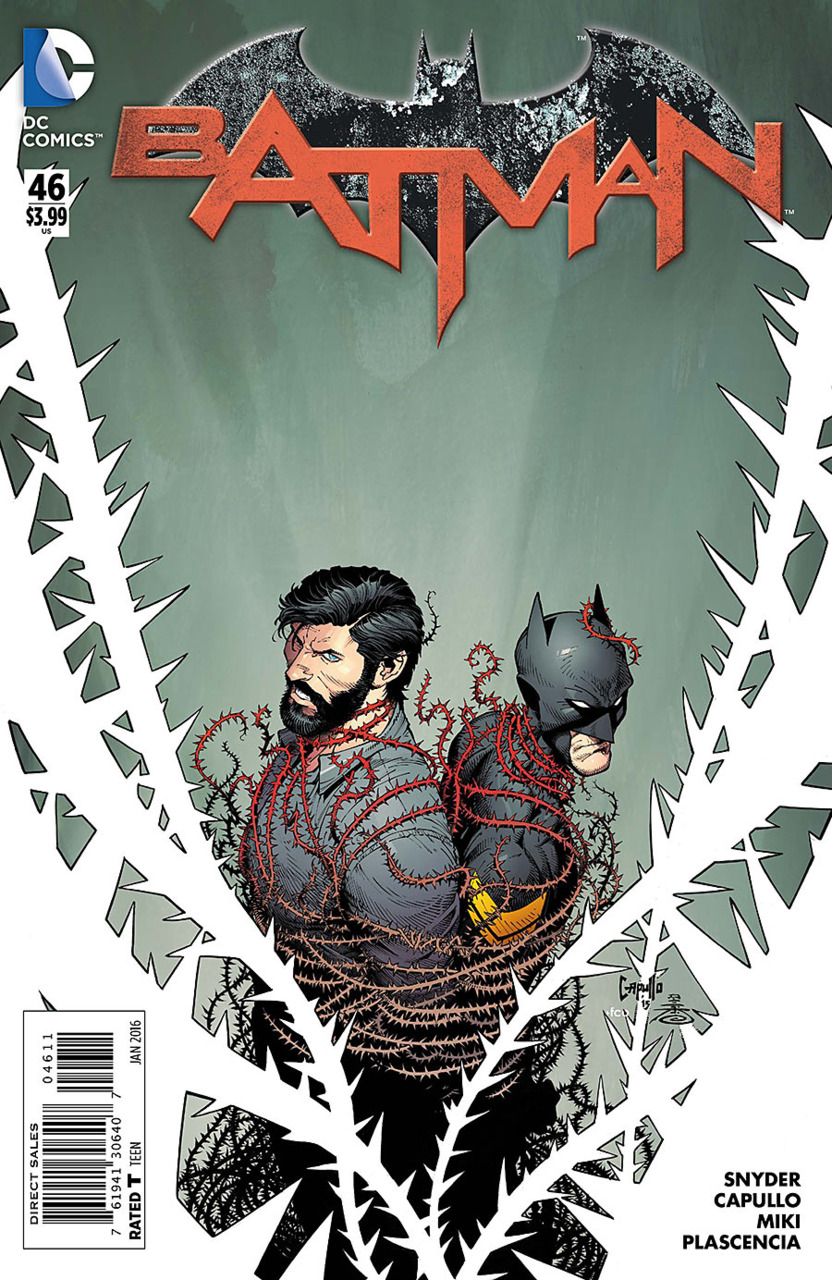 This issue feels like it more happened in it than usual… Maybe I’m imagining that, but that’s how it felt. Bruce takes a huge step in his life, Gordon takes a stand for himself and proves he can (keep attempting) to be a better Batman than he has, and Duke really shines in this issue as well. I enjoyed so many story threads that this issue touched on, and I feel like we’ve gotten a glimpse into who certain characters may be, and I included that speculation at the end of my review here, so scroll down for that… I really did have fun this issue and I think you did too if, you bought this comic… And if you didn’t buy it, or didn’t like it – WHAT’S WRONG WITH YOU?!

Snyder gives us a flash in a single panel of something of importance; it appears to be Alfred taking an axe to the cloning machine.

Bloom is slaughtering everyone in the room. He gets to Geri Powers, playing with her as she stalls to give Gordon time to attack. He does, shooting Batarangs into the back of Bloom’s head hoping it will work. It doesn’t, and Bloom pins Gordon to the floor, stabbing him in the shoulder and readies himself for the killing blow. However, Julia has gotten back inside the blimp, and turns on the Batsignal, which uses electromagnets – Bloom’s seeds put out an electro magnetic pulse, pulling him against the signal. His mask begins to change, and the flower begins to wither. He breaks free of the Batsignal, and runs away.

Back at home with Bruce, he notices Julie seems off. She confesses that her dad is up for parole in three months. Her dad was a gun runner, and was the seller of the gun that Joe Chill used to shoot Bruce’s parents. Bruce proposes, saying that this will bring closure, and Julia accepts the invitation without saying “yes”.

Duke is on his way into the Iceberg Lounge to find out what the Penguin knows about Bloom. He uses some fancy tricks to break in, without tripping the alarm, and breaks into Penguin’s desk files. Bruce notices that the seed is gone, just as Duke finds what he needs. He’s about sneak back out, when Penguin, Great White Shark, Black Mask, and Scarface (with Arnold Wesker?!). Duke presses a button which sends birds swarming around the room (think the bats from Batman: Year One or Batman Begins) while Duke scales up the rope. We cut away before we find out what happens.

Side point; I like the addition of the helmet Duke is wearing. It reminds me of a cross between Tim Drake’s Red Robin cowl, and Orion’s helmet. We also see some redesigns of some classic villains, here. Black Mask looks like he’s wearing an S&M mask with a zipper mouth instead of a black skull… Don’t want to go into that. Great White Shark looks like a TMNT villain – weird looking, but never really cared for the villain anyway. That is DEFINITELY Scarface… not 100% sure if that’s Wesker, because they are constantly covering his face, but it looks like him with the round glasses.

Geri shows Jim all the prototype suits they made, and says he can use it as an army. Jim counter offers that she can fire him either way, but she hired him because he KNOWS Gotham better than anyone, and he’ll do it his way. They also were successful in tracking down Bloom’s location when he was fighting the Devil Pigs. He’s on… wait for it… Blossom Row – and Jim finally gets to ride his “Batmobile” there… It’s a giant motorcycle. The plan is to use the Batsuit as a signal blocker to jam the seed that feeds him his powers, but he’ll have to be out of the suit in order for it to work. Gordon finds the warehouse and gets out of the suit once inside. He finds Bloom, who is speaking differently, but he says that was just for show. Gordon threatens him and tries to turn on the signal blocker, but the suit listens to Bloom’s voice instead, and grabs Gordon by the neck.

I think I know who Bloom is. I don’t know how all the pieces fit together, but I have enough to let my verdict be known. Now, in an interview with Snyder and Capullo, while Capullo was doing the cover with Bloom on it, Snyder had him go back and change something. Capullo ended up putting fishnet stockings over Mr. Bloom’s hands and neck “to cover his skin color”. Why would anyone cover their skin color, unless it’s very distinct and/or revealing as to their identity. This has led some speculation that Mr. Bloom is the new Joker… I don’t see any other connection, other than his skin color. The only one that makes sense to me, is if it is Daryl. The new random black guy that showed up to help team Batman. He’s in the story just enough to let you know he’s there, but not enough for there to be reason for him… Unless he’s Mr. Bloom. Think about it, he’s never been around when Mr. Bloom shows up. Last issue, Bloom easily killed the guards onboard the Batblimp, and took control… Where was Daryl? Shouldn’t he have been at the wheel? And even more evidence this issue; Daryl develops the suit for Gordon. He created the voice command. But Bloom gets the suit to listen to him without even trying… Because he made it. What do you think? Is it Daryl, or someone else. Let me know in the comments below.