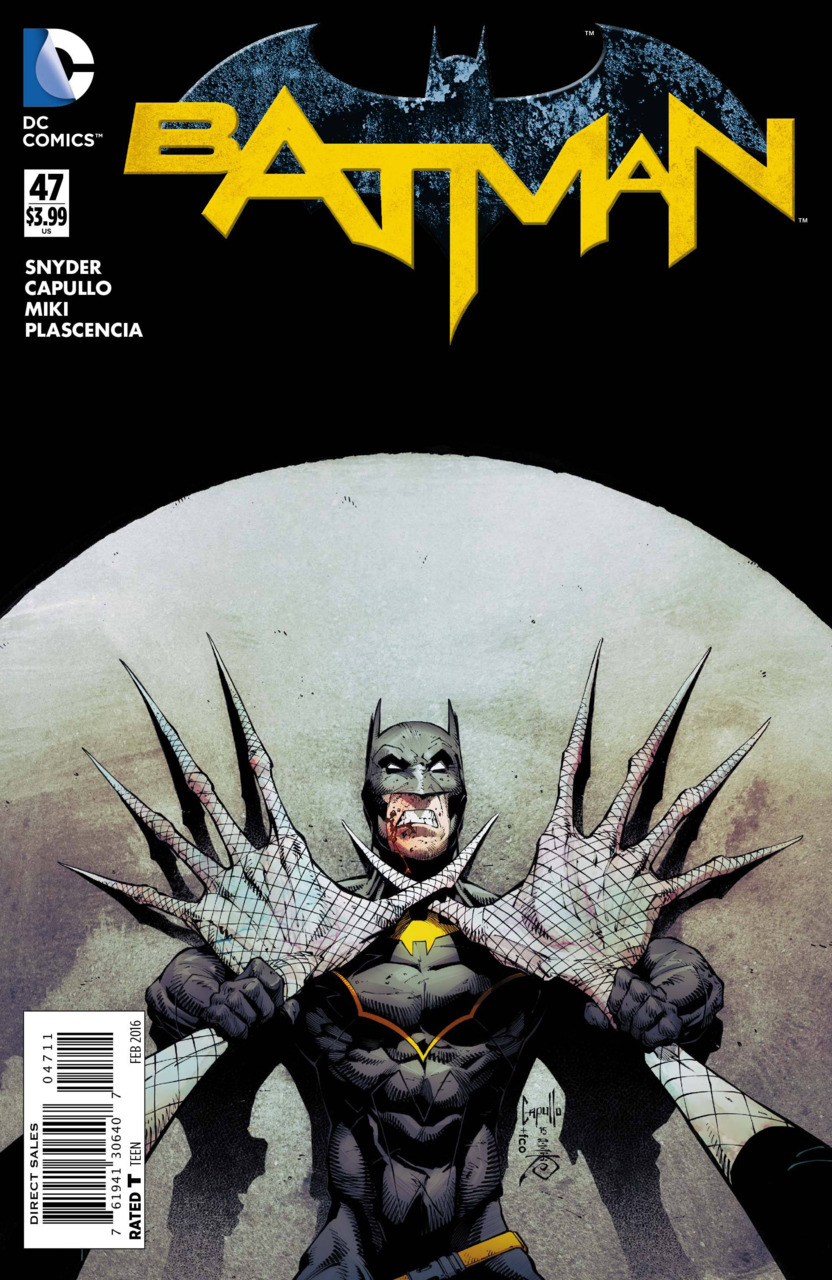 DC decided to pile almost all of my books in one week, so hopefully you guys don’t get sick of me… This issue of Batman threw me for a loop. It made me question what I thought I knew, and then moments later, made me feel better about it — kinda? I’ll get into it more in the spoiler section, but it did leave me scratching my head. I loved the moments we had with Gordon, as it seemed to be more focused on how out of his element he is, and yet how he can still get the job done at the end of the day. We still get some progression from Duke, and I’m continuing to like him more and more. I really do hope he becomes a true-blue member of the team.

My only complaint is that I’m starting to miss Harper Row. I feel like we haven’t heard from her in a long time, and I’m afraid that we won’t. As if everyone is just letting her fade into the background. Snyder finds a way to do a monologue through Jim that feels like Snyder’s usual info dump, but at the same time rings true to Jim’s character. And I’m not complaining. I’m saying that Snyder found a way to keep his voice on the book, and yet find a backdrop that fits with Gordon. He uses a story of a card game, instead of a scientific explanation, which I found quite clever.

Lettering is something that’s easy to overlook, but I want to continue to make an effort to take everything into account when reviewing/grading a comic. Steve Wands letters here, and I appreciate the uniqueness of each character. Jim’s letter box especially, has an old-school pencil-on-paper feel that fits his character. Bloom has a unique lettering that gives off his creepy voice vibe he has going on. It really makes you immerse yourself into the comic, giving voices to each character.

FCO continues to rock the coloring on this book. The team unleashed him during Zero Year, and he’s been on fire ever since. Now, I’ve learned a lot about coloring over the past few months, and I’ve come to recognize the tone he brings to each character by using differing color themes for each character, and then blending them together on a page when those characters share a page. Go back, and look for the four main colors that stand out on a page, and you’ll see what I mean. Yellow, Magenta, Cyan, and Black.

Capullo is great… Is there anything else to add at this point? I say YES! Working with new characters, he’s coming into his own on his detailing the differences between Jim and Bruce, especially. The first few issues, Jim’s cowl looked exactly the same as Bruce’s cowl, even confusing some friends when seeing Capullo’s art on Twitter, thinking Bruce to be back in the cowl. It’s taken on a different shape, though, making this Batman a little more weathered, and older.

Danny Miki’s inks look fantastic over Capullo’s pencils. This dude is a beast as well, and doesn’t get enough credit, in my book. Capullo’s pencils are VERY detailed, so it could be easy to add too many lines to the page. But Miki has this perfect balance, never over complicating a page, making it pleasing on the eyes.

Snyder flips the script here. Adding twists and turns that no one could predict coming, leaving you second guessing everything, yet not contradicting anything.

Recommendation – automatic buy… Of course, judging by the sale numbers, you probably already are. And if you’re not… You’re missing out, and will probably be catching up in trade later.

Mr. Bloom begins toying with Jim, every villains downfall. He fulfills Gordon’s request to let him go by directing the suit to let him go – so it throws him through the roof towards a helicopter. Gordon stresses his body to contort, and fires his grappling gun to keep from becoming “bat-salad”. He’s not very graceful though, and crashes through the roof again into Bloom’s pile of seeds.

He then resumes his fight with the suit. He uses the molecular contractor in his fingers to short the missiles, and immobilizes the legs so that it resorts to using them. It does, and the suit explodes.

Bloom pins Gordon down, mocking him, but the explosion has sent out an EMP, sabotaging the entire stash of seeds. Bloom is about to deliver the killing blow, when the helmet of the suit sends out a signal blocker, taking away Bloom’s powers. Gordon knocks him out, and takes him into custody.

Duke is having trouble fighting off Penguin, Black Mask, Great White Shark, as well as Scarface, until he slings an acid on their faces, and is able to get outside. Penguin uses a miniature cannon to blow up the wall, sending Duke falling into the water. He resurfaces in front of two henchmen, only to have Bruce club the with a bat (get the pun?). He talks to Duke, getting on to him for risking his life, when Duke gets a text from Daryl – saying he has news on his parents. Bruce comforts him, but it reminds Duke of the way Batman talked to him during Endgame, and he realizes who Bruce was. He walks down to the subway station, and stands in front of an oncoming train, until Bruce reacts and saves him. In that moment, Bruce had a flash, and remembers that he was Batman.

Gordon, Julia, and Daryl are driving Mr. Bloom in the Bat-truck. Gordon clearly has a concussion, and goes to the back to unmask Mr. Bloom. Bloom hints that he meant to get captured, and an army of Bloom’s hijack the truck, and rescue Bloom.

Bruce is thinking at the site of the accident, remembering, when a stranger approaches, asking if he can sit. Bruce tells him that’s fine, and when the stranger says that he’s seen Bruce here a lot, Bruce responds that he was in an accident here. The sharp-dressed pale man with green eyes replies, “So was I.”

So in those last few pages, we finally saw Daryl driving the bat-truck with Bloom in the back — ruling out that they are the same person. THEN on the very next page, we see multiple Mr. Blooms all seemingly to have similar power sets. So there is more than one. We also learned that Gordon was right about Bloom’s powers being blocked with an EMP, meaning they are an technologically based… Like Gordon’s suit. All the signs point to Daryl.

On the podcast, as well as elsewhere, some still believe it to be Joker. Their reasons are because of the pale skin and build on Bloom. I believe that to be makeup, and Bloom’s powers cause him to stretch. Also, was brought up the boldness Bloom had towards Penguin. And to this, I tell you to look back at Batman #44. This was taking place early in Bruce’s career as Batman. Mr. Bloom was there at the time. Why would Joker have two villainous personas at the same time? This doesn’t make sense to me. Joker would want to take the credit for himself. Also, Daryl is Peter Duggio’s cousin. My thoughts are that he sold Peter the drug to give him powers to fight off both of the gangs — the Four-Fives, as well as the Penguin’s gang — and it backfired on him. See the connection now? I still feel confident in my choice. I think Joker being included at the end is to mislead the reader – as well as have an interesting side story with Bruce – but the facts just don’t point to him. I also noticed that Daryl’s eyes are green, which is rare in someone of color… Nothing to take away from it now, I just found that interesting. Perhaps this is to cause another misdirection later on.

This issue gave us much to mull over, without overloading us. I very much enjoyed it.