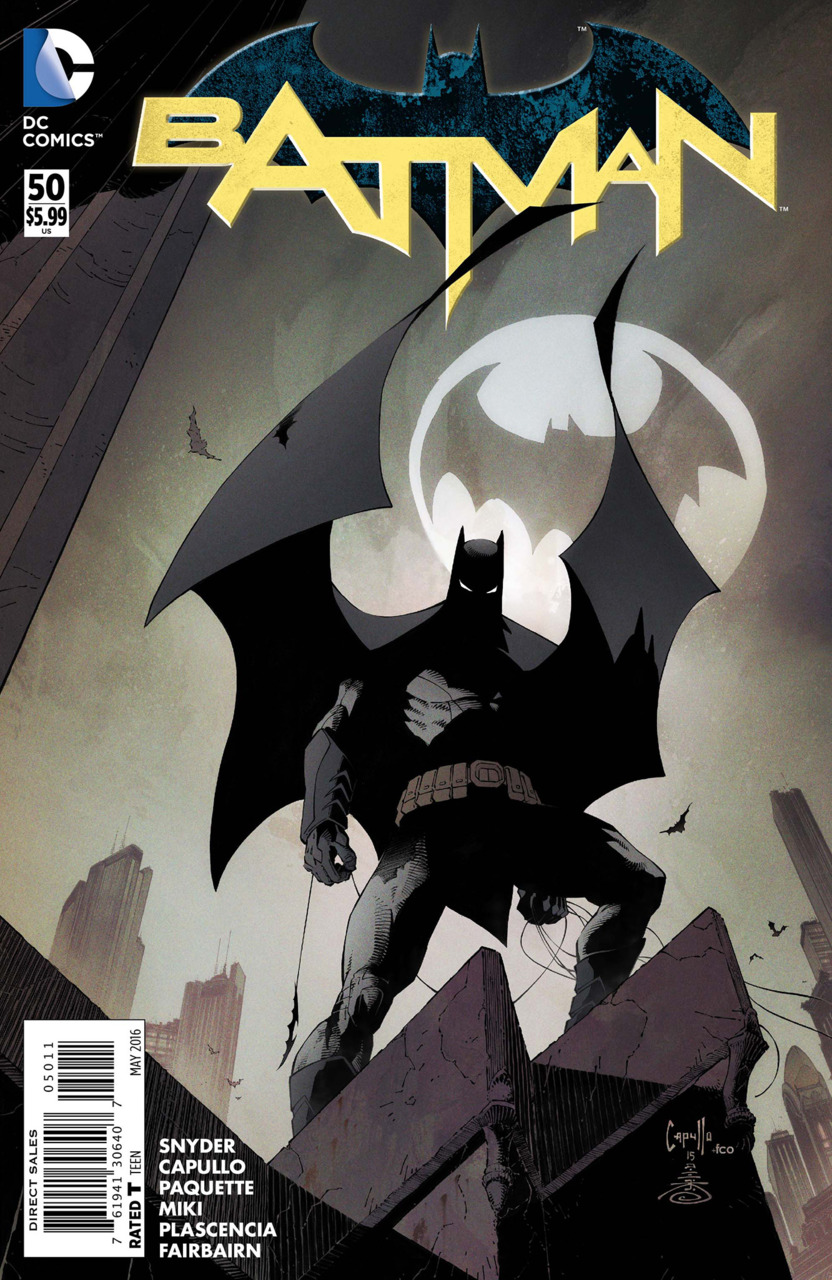 Breakdown: Scott Snyder delivered us with an amazing script. The pacing in it was solid, and kept you engaged throughout the book. Technically, the comic is sound in almost every way. The only bump I can give it, is that it lacks an emotional gut-punch that would send it over the top.

Greg Capullo’s pencils are gorgeous. His storytelling is top notch. And his character designs are solid. I’m not sure how I feel about the new suit yet, but Capullo makes it look good. What I’m worried about is how it will look when others draw this design. I love Gordon’s stealth suit, so I was kinda hoping for a similar design. I can’t help but think that the new design would look better if the whole suit was black instead of grey.

Danny Miki’s inks match Capullo’s pencils perfectly. His line-work is so clean, it just enhances anything Capullo has already done. FCO Plascencia’s colors are still as beautiful as ever. I honestly don’t know what else to say about the guy right now. Yanick Paquette’s art is amazing. This issue, he doesn’t play with the panels as much as he usually does, but that doesn’t make his art any less awesome. I don’t care much for his superhero work. His Batman looks a bit stiff, and I’m not sold on the new costume when Capullo isn’t drawing it. The way he draws regular people looks awesome. I’d love to see him on an indie book. Also, his Jim Gordon looks just like Bryan Cranston, and I thought that was awesome. Nathan Fairbairn’s colors are beautiful. Especially during that opening page, showing Gordon’s first view of Gotham City. It just makes the whole city breathtaking. Steve Wands’ letters continue to impress me. He makes it so easy to follow along, even by just slightly changing the color of the font to help you to realize that someone else is speaking.

Synopsis: We open up following Bruce throughout the Batcave as he shaves (apparently the beard grew back after the end of last issue), and looks in his… bat-closet?… as he tries to figure out what to wear. We get a lot of cool references here, as we see the suit he’s worn throughout the New 52, a Batman Beyond suit, one that looks similar to the one Dick wore as Batman, Zero Year, a Jim Lee version, and one with the Michael Keaton Batman symbol – although it’s grey instead of solid black. Over this, we hear a pep-talk being given that would make Lebron James feel guilty, as we cut away to Jim Gordon.

He’s beat up bad, and Julia is trying to get him to a hospital via helicopter — his spleen has been ruptured, and he is bleeding internally. He’s got about an hour left before he bleeds out. Jim wants to see how bad of shape the city is in, though, and gets up. The GCPD are all in the prototype bat-suits trying to fight off Bloom, but Bloom quickly uses his powers to take control of their suits, and uses them to shoot at the nearby civilians. Julia and Jim realize that they are surrounded by Bloom’s… Bulbs?… We never gave them a name, and Bulbs are plant themed… Our heroes are quickly subdued, and all hope seems lost, until Batman comes crashing down onto the bat-signal. He cracks a joke, shows off his new suit, takes the Gotham City flag, and begins to beat the crap out of the Bulbs with it as well as the bat-signal.

Using the seeds, Bloom has altered the energy source coming from the Powers building to create a star in the middle of the city. He plans on leveling the city so he can start again. Jim wants to help, but Batman handcuffs him to the helicopter — telling him it has a built-in GPS, and that it will release upon his arriving to the hospital.

Meanwhile, Duke has boarded the bat-blimp, and gets Daryl to let him in. He’s got some explaining to do… When he hacked into Cobblepot’s computer, he found a Crowne Genius Grant Nominees, and found both his name and Daryl’s in the system. He demands answers, and Daryl’s body deforms, and he attacks Duke.

Batman uses some cables, batarangs, and some well-timed moves to pin Bloom to the ground, but Bloom forces the cops in the bat-suits to fire at Batman. He seems to be handling them pretty well, and we cut back over to Duke. Daryl’s seed allows him to control bio-organic matter, and he uses it to hold Duke up against the glass, so he can monologue… Daryl hates Bloom. Daryl was the original bloom. He created the seeds with the idea of giving good people superpowers to protect the city. He gave the first one to his cousin, Peter (see issue #44), and when that didn’t work, he decided to try it again. But this time he used victims of the Joker attack, people who wouldn’t be missed if the tests failed. But when the seed took, it did so much sooner than Daryl expected, so he didn’t know which person or seed worked. Bloom stole his seeds, and did with them what he wanted. Duke tells him that the seeds aren’t the answer. That they are the reason the city is in chaos below, and he fights his way out of Daryl’s grip, and knocks him out.

Gordon still hasn’t gone to the hospital. Instead, he removed the helicopter door, and has made his way to the Powers building. The Rookie has been rebuilt, and Gordon is planning on using it to amplify the disrupter through the antenna at the Powers building. Buuut… that plan goes quickly down the drain when Bloom throws said antenna through the window. A gigantic Bloom is outside the building, and tries to kill Gordon like a cat does a mouse. But just when things start looking bad, Batman (in a new giant bat-suit) beats Bloom down, and tells Gordon to find another way to send the disrupter signal out. Bloom melts down one of Batman’s robot arms, and pierces through the machine until Duke blows Bloom away with the blimp. Duke then turns on the electromagnet on the blimp to trap Bloom to the blimp. Duke points it to the star, puts on a jump suit and a parachute, and jumps out. Bloom cuts the cables, sending Duke into a free fall, to which Batman swings by and saves him. The people of Gotham realize that the seeds are causing a problem (they’re a quick bunch), and begin removing the seeds from beneath their skin.

Gordon is looking pretty pale from blood loss, and is relaxing in the batsuit, smoking a cigarette. Gordon has taken the new element from Powers — Batmanium — and is going to use that to project the signal. He does so, in the face of death, and it works. The star is destroyed, Bloom is taken with it — saving the city.

Epilogue; Gordon is sitting in his hospital bed. Now feeling better, and reflecting on when he first came into the city. Julia and Geri come in to visit, and she fires him from being Batman. Geri has also shut down the Batman program. Harvey comes strutting in, announcing that Maggie has stepped down as Commissioner, and hands the badge back to Jim. Jim goes outside to reflect, when Batman shows up. They thank each other for for what they have done for the city. We see Bruce offer Duke a job… We see Julia with a clean-up crew, fixing up the shelter, when she notices something on the wall. A name — Bruce Wayne.

Closing Thoughts: So I think I just broke my personal record for longest review… Like I said, I’m not sure about the new redesigned suit. Capullo draws it great, but I’m leery about how it will look when others do it. I do really hope the fallout of this story arc carries over into future stories. I like how Snyder has handled Duke. He’s a very likable character, and I’d hope that Harper Row doesn’t suddenly go away either. If this story has done anything for me, it’s made me want to see a GCPD S.W.A.T. Bat-team lead by a Jim Gordon Batman, Batwoman… I’m not sure who else, but that gets me excited. I’m also excited to hear the new creative teams heading into Rebirth, which we should hear about this weekend.