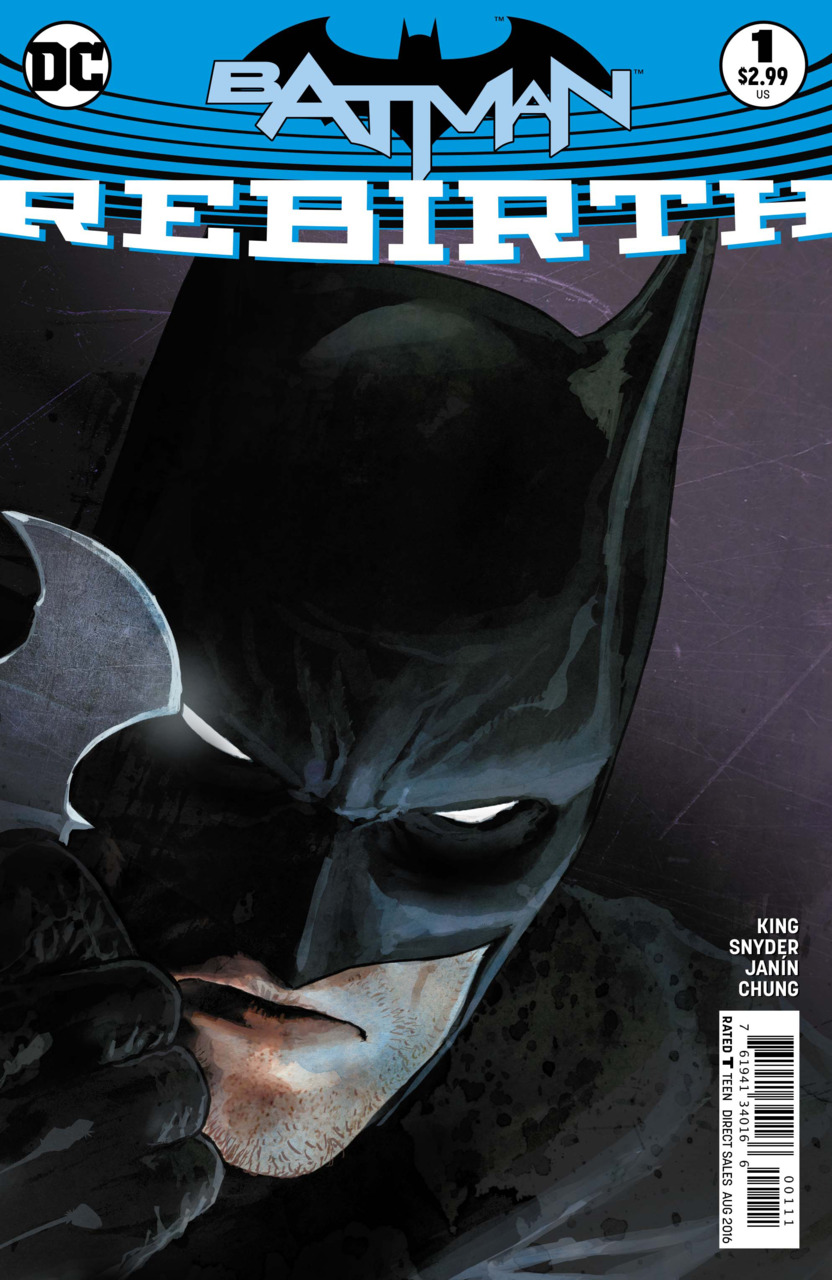 Synopsis:  Last week DC Universe: Rebirth crashed onto the scene, coinciding with the finales of both the Darkseid War and Last Days of Superman.  The trinity of stories effectively brought about the end of the New 52 era of DC Comics, putting old storylines to bed, and setting up many more for years to come.  Following the main Rebirth one-shot are multiple character-based one shots setting up their individual worlds in a post-Rebirth DC universe.

The Batman installment of Rebirth opens innocuously enough, with butler extraordinaire Alfred tending to the Wayne Manor avocado trees, only to be interrupted by the arrival of young Duke Thomas, of We Are Robin fame.  The story then kicks into high gear, with Batman leaping into battle with a new version of classic villain Calendar Man who, naturally, has a scheme to destroy Gotham that ties into the seasons motif he has consistently employed throughout the years.  As quickly as the action begins, however, it ends with Batman easily overpowering his foe.  Unfortunately for Bats, things aren’t that simple.  In Gotham, it seems they rarely are.

Calendar Man’s master plan involves releasing his homebrewed spores into Gotham’s atmosphere, with undoubtedly nefarious goals in mind.  Thanks to the new bat-suit, however, Batman is able to let loose an electrical charge throughout the air, seemingly thwarting Calendar Man’s schemes for good.  We cut to the next day where it is a balmy 137 degrees in Gotham and a newly rejuvenated Bruce Wayne is performing his extreme workout regime while hanging off a helipad.  Lucius Fox is there telling him the good news that the Wayne family fortune and company are back in Bruce’s hands.  He also recites a touching memory of Bruce’s father, the late Thomas Wayne, and a look he once received from him that bared a striking resemblance to a look he received from a certain masked man.

Back in the Batcave, Bruce is walking Duke Thomas through the newest iteration of Calendar Man’s power set.  As the seasons progress, he ages.  Dying in winter and being reborn a young man in spring.  The speed of Calendar Man’s current transition cluing the caped crusader onto the fact that things aren’t as over as he thought they were.  There are more spores out there, progressing the seasons forward at an unnatural rate that can only end in one thing:  \destruction.

On the way to deal with the spores, Batman explains to Duke why he’s here.  With his parents out of the picture due to lingering problems from the Joker toxin from Endgame, Batman offers Wayne Manor as a temporary residence.  He also offers him training.  Duke immediately rebuffs the thought of becoming another Robin sidekick, when a new yellow and black costume is presented to him, emblazoned with the family bat logo on the chest.  Batman wants to try something different.  Duke’s in.

The balance of the issue plays out as you may have imagined.  The team locate the spores and destroy them in a tense underwater scene with an interesting use of physics, and Duke learns that Batman does the impossible on the regular.  Calendar Man regenerates into a younger body and does the supervillain “This Isn’t Over” monologue.  We close on the men training and talking, working away while Alfred goes back to the avocado tree.  It’s all fairly domestic.

Thoughts:  This issue didn’t play out so much as the first step in a story, or even as an introduction to the world as I was expecting out of a Rebirth title.  King and Snyder here have taken the opportunity to tell a fairly closed story without bringing in most of the extended Bat-family.  It’s an interesting choice that really didn’t hook me in on the Rebirth concept.  Things happened, Batman acknowledged the need to go about things in a different manor.  After the chaos brought about by the Joker in Death of the Family and Endgame, I don’t blame him.  Also, it’s nice to see some payoff to the long game Snyder has been playing with Duke, the yellow and black character of Lark was teased what seems like ages ago.

Stepping into the shoes of Greg Capullo is a daunting task, one that Mikel Janin seems to be up to.  His pencils and inks are clean and tight and he knows how to work the camera.  For an issue that dealt with so many talking heads, everything felt dynamic.  The crown jewel of the issue, however, is the double page spread of the Batcave.  It’s cinematic and enveloping, and Janin’s ability to lead the eye through and have meaningful conversation on the spread is impressive.  The art team is rounded out with June Chung on colors, who brings vibrancy to the outside world and contrasts it with the monochrome textures of the Batcave.  The pages are never boring, which is a pitfall some colorists have fallen prey to when dealing with books in the Bat-family that spend such a large portion of time underground or in the night.

This was the briefest of introductions to whet the appetite.  Quick action, some foreboding dialogue, and a little bit of set up.  I’d like to say it was firing on all cylinders and I’m even more excited to see what’s coming next, but I can’t.  The connection to the story going forward wasn’t clear enough for me to get to that point.  This is a perfectly manageable Batman story, leaning towards great.  It just wasn’t captivating enough to earn the Rebirth logo on the cover.

Regardless, the main event is forthcoming with Batman #1 in two weeks.  I’m still excited.  The team proved they could tell a solid Batman story.  The introductory scene is over, it’s time to cue the opening credits, and see what Tom King and crew have in store for us.