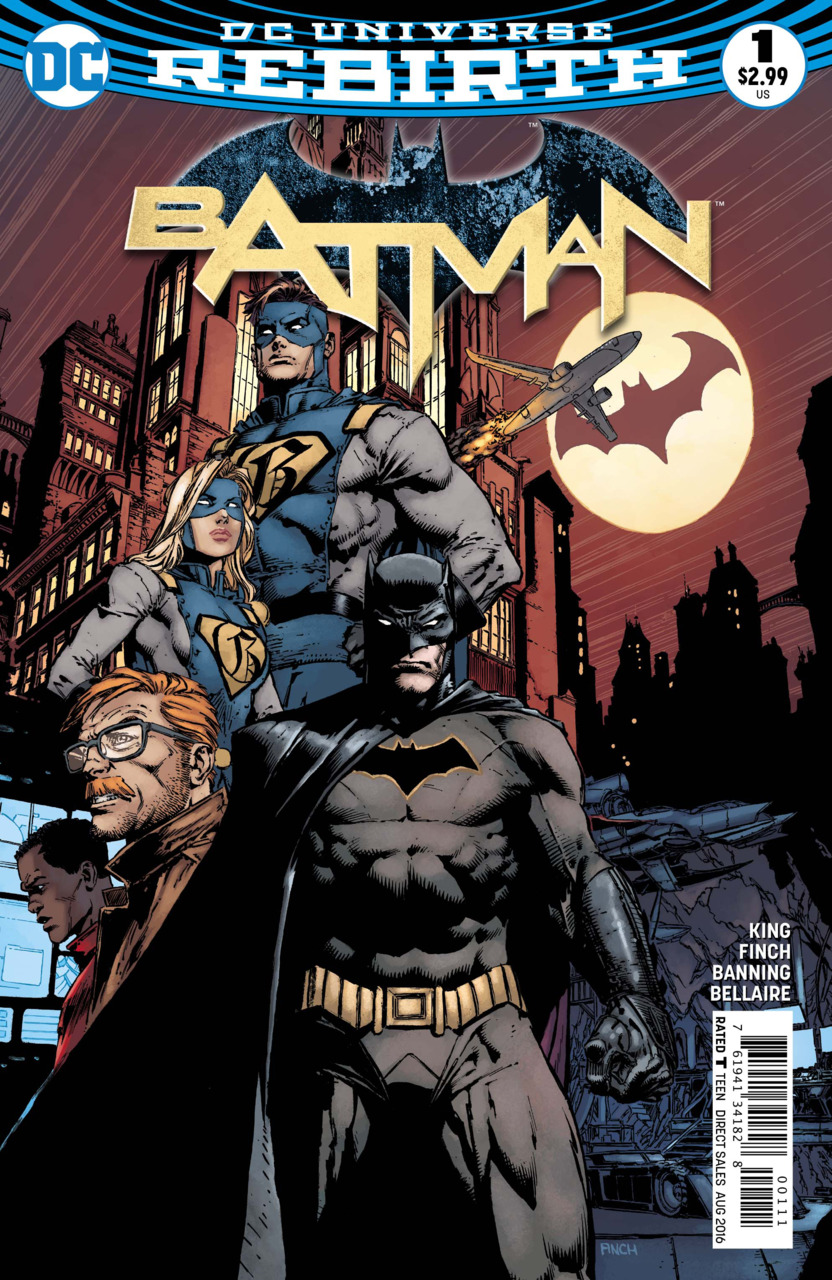 The third volume of the main Batman series opens up with a brief scene set far above Gotham, where a plane is making its decent.  Through the window the Bat-signal is seen filling the night sky.  We then cut to the classic rooftop pairing of Commissioner James Gordon and Batman, discussing things Batman shouldn’t know about.  But, he does, because he’s Batman.  The information in question is a raid on a nearby government installation resulted in the theft of three surface to air missiles, two of which were recently recovered.  The third is a different story.  Unbeknownst to our duo, it is currently headed directly towards the descending plane, striking its tail and sending it towards downtown Gotham.

What follows is the traditional Batman formula.  Gordon turns, Batman is already in action.  No time is wasted getting the gang together, Alfred and newcomer to the family Duke Thomas, are on the bat channel to discuss how to prevent the catastrophe.  Trajectory is immediately determined and Batman makes the call to get some of the big guns there to help.  Unfortunately, they’re preoccupied.  This one is on Batman.  An action sequence follows with Batman determining the best way to save the day is to get on the plane.  Duke Thomas is quick with the physics calculations and gives directions on the timing and location to eject Batman from the Batmobile and get him to the plane.  It works.

Batman wastes no time in directing the police to set up shop where he intends to land the plane, not the location of the original crash point emergency services were en route to.  Back on the plane, the mood is not so good.  A panicked man reminds everyone that in Gotham they don’t have Superman to save them, no one is flying to their rescue.  However,  Batman has different thoughts on the matter.  He has arrived on the plane and assessed the situation, placing portable engines on the undersides of the wings.  After Alfred engages them, the plane’s descent is stalled.  Navigating the skyscrapers of Gotham, however, is another story.  Quick thinking spins the plane sideways between buildings and towards its destination in Gotham harbor.  Meanwhile a shadowed figure looks on from the rooftop where it assumed the missile was launched, seeing as there is a dead Kobra agent.  He reminds Batman to “Observe the clock…”

Back on the 747-turned-batplane Alfred reveals the wrinkle in the problem.  In order to land the plane safely, Batman will have to be there every step of the way, most likely being killed in the process due the force of the landing.  Batman quickly makes up his mind to sacrifice himself.  He, of course, has protocols in place for such an event, letters to be distributed, and final wishes to be seen to.  His last moments are spent with lifelong companion Alfred, who tells him how proud he is of him and how proud his parents would be.  This is a good death.  As the plane touches down in the bay, at the last moment it tilts up, gliding horizontal to the water then landing softly.  Batman naturally assumes Superman has come to his rescue.  As it turns out, it is new heroes Gotham and Gotham Girl.  This is their city and they’re here to save it.

Tom King is aiming to make an impact in the Batman world right from the start.  Now that the training wheels are off and he has taken full control of the core Batman title, his vision is beginning to take shape.  I criticized the Batman Rebirth special for not being focused enough and that lack of story is more than made up for here.  King is telling the story of a man with no powers and the kind of hero he is.  This is a very familiar concept, but it is being told on a much grander scale.  Most of the mainstays are touched upon in this opening chapter.  We get a feel for how the team works together and the working relationship between Gordon and Batman.  Gone are the days of the call signs, so don’t expect Batman to be interacting with “Penny One” anymore, he’s just Alfred.  The characterization of Gordon is spot on.  The look and the wry, beat down sense of humor he embodies have made him big part of the Batman mythos, and it’s nice to have him out of the robot suit from Superheavy.  King isn’t giving us everything right away, though.  We get a good amount of set up here, from the mysterious character making “clock” references (a tie-in to the ominous statement from the conclusion of DC Universe Rebirth?) to the cliffhanger introduction of Gotham and Gotham Girl.  It would be natural for me to assume the duo are Kryptonian in nature, due to the similarities of their shields to that of a certain Kryptonian operating elsewhere, and the fact that they fly and have super strength, but I’m thinking there’s more to the story.  It’s too early for much speculation beyond those thoughts.  The comparisons between Batman and other powered heroes will more than likely be plenty during the story, as long as they are kept subdued and not allowed to overpower the story, we’ll be good.

Finch produced some solid art here.  The scenes themselves were striking, but I feel the camerawork could use some work as the layouts weren’t very dynamic.  Banning on inks is going to be working overtime with Finch’s work as the styling of Gotham at night is heavy on the shading.  Jordie Bellaire’s colors are on point as ever, the muted palette she uses makes Gotham feel lived in and familiar.

All in all, Batman #1 is a great setup that shows the core Batman title is in more than capable hands.