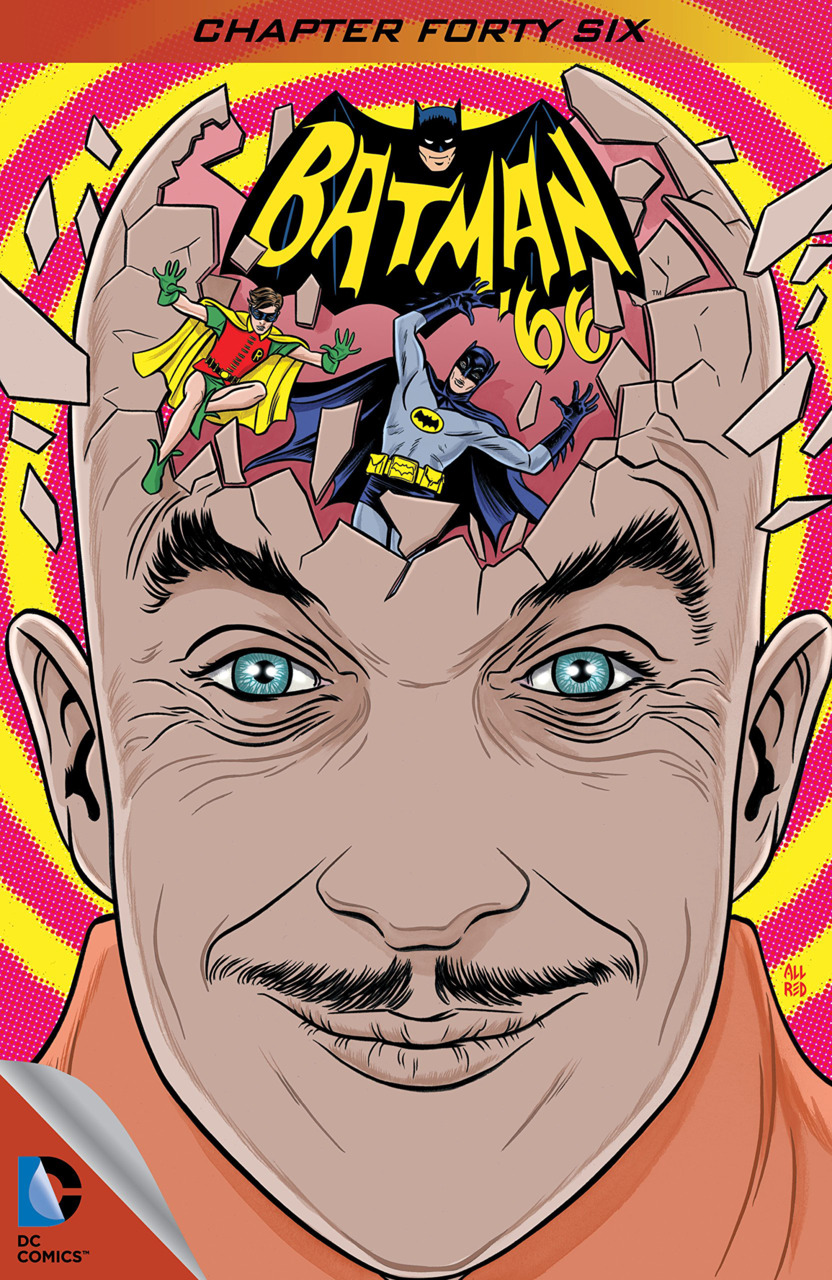 This special Halloween themed chapter of Batman ’66 opens on two kids with Joker and Penguin masks descending upon an unsuspecting Superman costume clad kid. Meanwhile our soon to be young hero searches desperately for a costume to wear while trick or treating. Cries of help from “Superman” lead the boy to look out the window to see “Joker” and “Penguin” making off with their bag of loot…I mean candy! With the cries for help and the sudden bat rushing past his bedroom window, the young boy decides to become none other than the Caped Crusader for Halloween. However, the young hero is soon handcuffed with an even bigger burden, that of taking his little sister with him. Upon examining her costume, “Batman” decides that her Masked Rider costume is not good enough to fight alongside the Batman…only the Boy Wonder Robin himself can fight by his side.

Eventually “Batman” and “Robin” chat with “Superman” to figure out what had happened. Taking to their bicycle, the dynamic costumed duo begins investigating their neighbour for the whereabouts of “Joker” and “Penguin”. The two eventually uncover that these two have stolen candy from many of the costumed kids…a true “kiddie crime wave!” Finally they come across and ghost who tells them about the two fiends taking his bag and then escaping, but not before mentioning their destination – the Hollow.

Arriving at the Haunted Hollow, the dynamic duo sees “Joker” and “Penguin” with bags of candy heading towards a tree house. Springing into action atop their go-kart Batmobile, the villains attempt to escape by climbing into their tree fort. Attempting to climb up the tree, “Joker” severs the fort’s rope causing “Batman” to crash back to the ground. Opening their bags to examine what they had taken, the two fiends realize that all they had stolen from the ghost was a bag of rocks. Realizing that the villains trapped, the duo calls in the authorities…otherwise known as the parents of the two villainous kids.

All the kids return home with “Batman” and “Robin”, happy that they caught the bad guys…but sad that they had missed out on all the candy. Mom eventually comes outside scolding the kids at returning home late and letting them know they had visitors. From the shadows, the real Batman and Robin emerge to congratulate their doubles on solving the crime and saving the day…and present a great reward, a giant bag of candy! The issue ends with the Batman ’66 team wishing all readers to “have a Bat-tastic Halloween!”

What an awesome issue! Something so simple and in the true spirit of Batman ‘66. I really enjoyed that we didn’t get to see Batman and Robin in this issue until the very end, and that the sole focus was on the two kids dressed up as the dynamic duo. Both kids really personified their respective character – “Batman” was eager to help those in need, while ensuring his “old chum” not to be scared and follow his lead. “Robin” on the other hand was quick witted and ready to spring into action on the villainous duo.

With Halloween so close upon us, it was nice to see the Batman ’66 team deviate from their normal stories to tell a quick one-shot issue like this. Again it was a very fun feeling issue that had a few good one-liners and played up the aspect that these were kids and not adults perpetrating the crimes. The art was also very well done, nice and clean with good use of “DC Squared”.