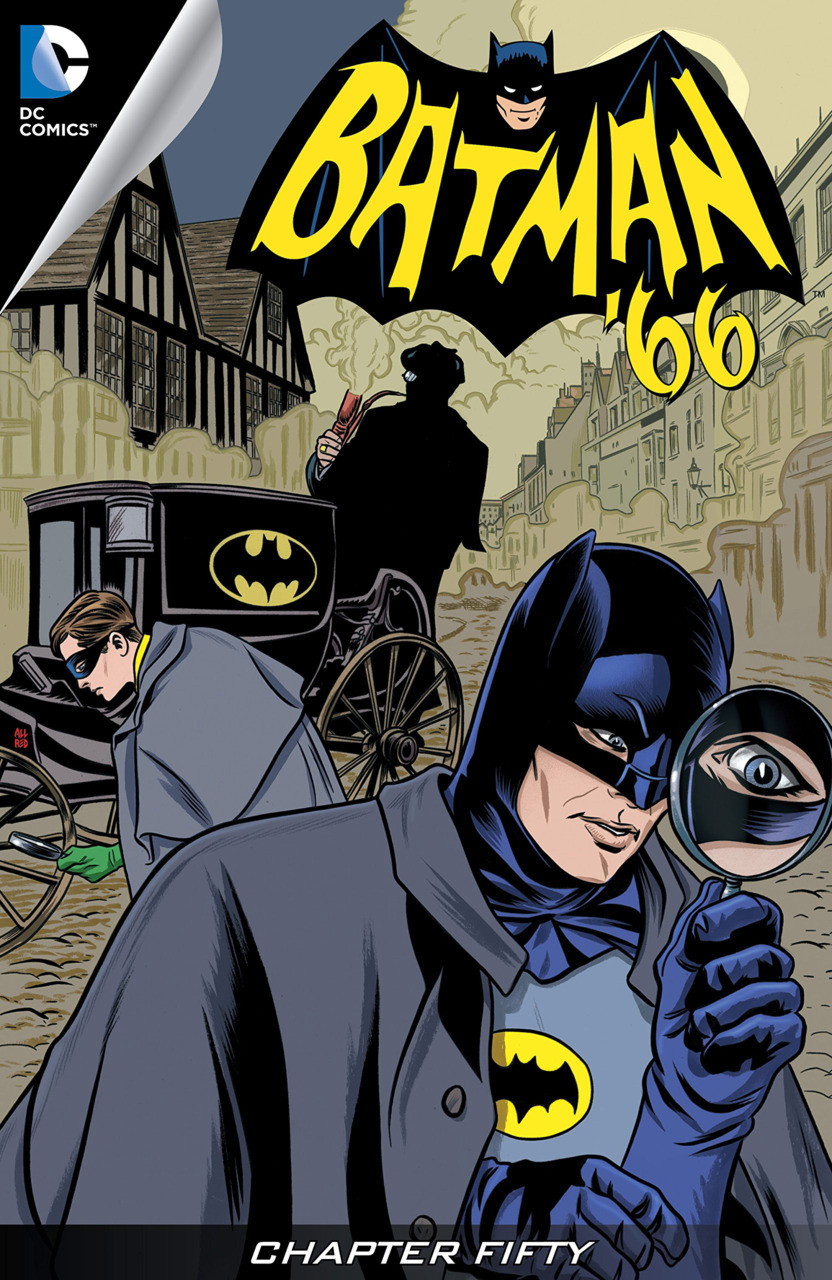 Our chapter this week opens on an auspicious evening in Old Gotham, as millionaire Bruce Wayne and his youthful ward Dick Grayson arrive at the neighborhood festival. Bruce and Dick quickly don some opera hats to fit in with the period clothing clad citizens walking the streets. A town crier is soon heard announcing that the mayor is preparing to make a toast in Olde Town Square.

We then cut to the square where we see Mayor Linseed standing in front of a giant smoking pipe, and we get some clarification from the mayor that Duke’s Fine Pipes has sponsored this year’s Olde Gotham Festival. Linseed then announces that the newly established Gotham Girls’ Academy will come on stage and read some poetry. We cut to our heroes who look seemingly confused, Dick has no recollection of any new girl’s academy opening in Gotham, (“I’m pretty sure I’d know about something like that.”) while Bruce has no knowledge of a company called Duke’s Fine Pipes. He quickly flips a switch to signal Alfred to bring their attire to become Batman and Robin. The girls have meanwhile made it to the microphone and withdrawn several colorful balls which they then hurl into the air, they quickly explode and emit many different colors of smoke. The mayor seems positively confused as to what is happening, and our own curiosity is swaged when our villain steps out from the smoke and reveals himself…Professor Marmaduke Ffogg!

The mayor calls for Chief O’Hara to arrest the villains, but they are quickly subdued by Ffogg’s hench-girls. Meanwhile, Alfred has arrived and the dynamic duo spring into action to capture Ffogg. The girls are overcome by excitement as they see Robin, the Boy Wonder and surround him quickly. Batman and Ffogg quickly banter about the fog now permeating the area as Batman dons a gas mask…however he is quickly knocked out by Ffogg’s sister Lady Penelope Peasoup. Ffogg gathers the girl’s attention and they reveal that they have tied up Robin as he refused to strike a lady. Ffogg then walks over to the giant pipe sitting in the square, flips a few switches and buttons and a giant cloud of fog starts to escape the pipe…covering the area and spreading across the city! Ffogg’s daughter Prudence (who was a part of the group of girls) asks what the plan for Gotham City is, Ffogg reveals that his inspiration came from Sandman and King Tut…they too attempted to cover Gotham with their sleep sand and Osiris Virus respectively, but they failed…he intends to improve upon their formula. He has designed a vapor to interact with the cool temperature and leave Gotham subdued for enough time that they can plunder all of its wealth. The villains walk off into the enveloping fog as Robin finally passes out from the gasses.

Batman finally awakens from the blow he took to the head and rouses Robin. The Boy Wonder quickly tells Batman everything he heard about Ffogg’s plans…however the duo is quickly surrounded by an angry mob carrying torches and pitchforks; it seems that they want the heads of the Caped Crusaders!

Well this was an interesting story for me, because for once I had no recollection of the villain that appeared in this chapter of Batman ’66. It seems that Ffogg and his sister Penelope only appeared in the series during a 3 part episode in Season 3, portrayed by actors Rudy Vallee and Glynis Johns respectively. Guess I’ll have to check these episodes out once I grab up a copy of the ’66 show on DVD.

Other than being surprised that I didn’t know that villain of our story, I felt a little let down that they were rehashing the plots from previous stories in this title…the Sandman story comes from one of the earlier chapters, while the Osiris Virus was only a few backs and I covered it here on the website…are they running out of original ideas already?

Besides the rehashed plotline, I did find the storyline interesting and Ffogg is definitely one of the stereotypical gimmicky villains seen in the ’66 series…I mean seriously, fog is thing? But I guess by the third season, they were really scrapping the bottom of the barrel in terms of villainous shticks.

Overall this chapter was okay, I liked that we got to see a new villain added into the Batman 66 comic mythos, but definitely let down that they are reusing previous plotlines.