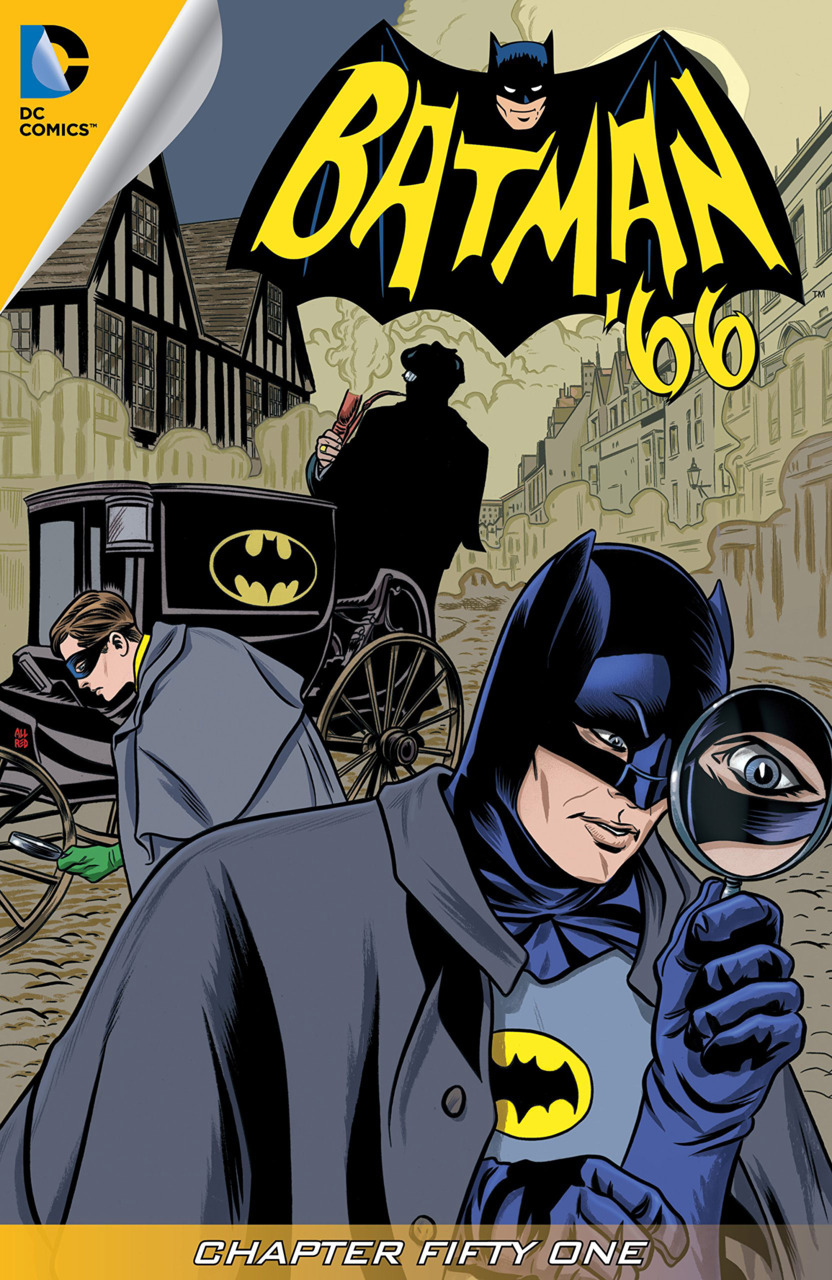 This week our issue opens with the fog parting as the dynamic duo runs from the angry mob descending around them. We get some clarification from Batman that the fog must be affecting the citizen’s minds and making them hostile towards our heroes. Batman and Robin attempt to escape above the fog (so as not to get confounded themselves) and launch their batarangs towards the gargoyle of a building. The two begin to bat-climb above the fog, but a nearby window opens and Prudence Ffogg appears and laments that she and Robin could not be together…she promptly cuts the rope and sends the heroes tumbling back to the ground.

With only one chance to save them, Batman hits a button on his utility belt that sends a signal to the car being driven by Alfred. Luckily the butler was just around the corner and manages to catch the dynamic duo in a parachute that he deploys from his car. Batman thanks Alfred for the swift rescue and he and Robin speed off towards the giant pipe still spewing fog over Olde Gotham Square (but not before donning some handy nose filters!). Hoping to find a way to shut down Ffogg’s device, Batman produces a magnifying glass and notices a high concentration of fingerprints near a hidden panel in the pipe. The duo manage to turn off the belching fog, and they begin to ponder how Ffogg will affect the rest of the city (as he mentioned was his plan in the last chapter). Robin suggests the Gotham Reservoir…but Batman states that it is too similar to a scheme concocted by the Joker, and Ffogg wishes to be unique. As the duo wonders aloud, a blind woman approaches them and lets them know that the villains were discussing their plans in front of her.

Batman and Robin race off to the #4 Steam Heat Plant where we discover Ffogg and his gang hard at work. The dynamic duo jump into action and Lady Penelope Peasoup orders her girls into battle. Not wanting to hit a lady, Batman and Robin turn Ffogg’s fog against them and fill the room so no one can see what is happening. The girls end up fighting each other and knocking themselves out. As the fog clears, Batman and Robin stand triumphant and place Professor Ffogg in batcuffs.

As stated last week, this storyline seemed to be rehashed from previous stories seen in this series. And it was a mediocre conclusion at best. There were a few funny moments in the characters dialogue that I rather enjoyed, and found it hilarious that Alfred was “just around the corner” and manages to save the duo…I rather like when Alfred gets to play the hero in any Batman book.

Our villain was also rather weird and eccentric…again I wasn’t too familiar with Professor Ffogg and wasn’t really impressed with his gimmick. I do like that this series is incorporating rather obscure villains that we only saw once or twice on the ’66 TV show, but it seems like this one could have been forgotten about.

Overall this story was okay, and if you’re interested in good Batman ’66 stories…you can probably skip this story and grab another one from the back issues.