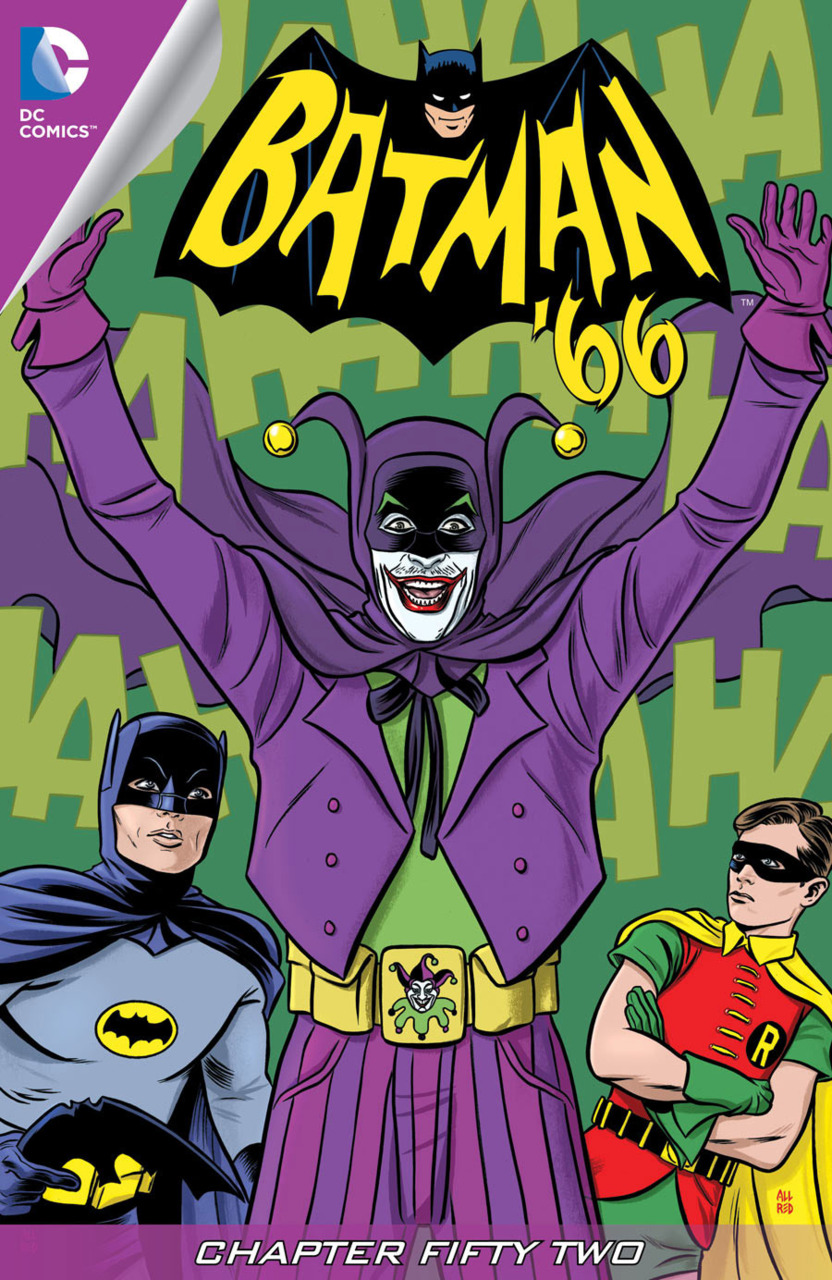 Our chapter this week opens at Gotham’s Natural History Museum where we see the building get rocked by a giant eggs-plosion. Egghead and his goons burst from the entrance carrying a giant dinosaur egg…until our hero enters the fray – Jokerman! Complete with a green and purple styled Jokermobile, Jokerman and his sidekicks quickly incapacitate the villains. They quickly tie up the bad guys and leave the eggs for the authorities to collect. With a quick departure Jokerman takes off…just as the dynamic duo arrive on the scene. Batman and Robin are extremely perplexed as to how the villains were stopped before they arrived.

We are then treated to a montage (complete with old school spinning newspaper headlines) that shows Jokerman cleaning up crime in Gotham City, including taking down the Penguin and Catwoman. Batman and Robin continue to be bewildered that it is indeed Joker doing all of these good deeds.

Back at stately Wayne Manor, Bruce becomes exceedingly frustrated that Jokerman is continuing to act as a hero…he is certain that this is an elaborate plot by the Joker. The batphone sounds, and the two crime fighters spring into action – sliding down the batpoles into the waiting batmobile below. However as they drive into Gotham they realize that the shining batsignal has been turned into a grimacing face of Jokerman! Arriving at Police Headquarters, Commissioner Gordon and Chief O’Hara are flabbergasted as to how the signal had been changed…it seems that their intrepid mayor has made the decision to have Jokerman be the primary hero of Gotham. The batphone…I mean, Jokerphone suddenly beeps and Batman answers it. It is revealed that Jokerman is currently receiving the key to the city from the mayor and he is calling the dynamic duo in order to gloat.

A pretty quick read this week, but very intriguing and stimulating none the less. A story that places Batman at odds with one of his Rogue’s Gallery is always nice to see (especially since that happens almost every issue)…but the fact that Joker has clearly developed some scheme to lure the people of Gotham into believing him to be a hero is really neat.

I loved seeing all of the different Jokerman versions of everything – green and purple batmobile, batsignal, batphone etc. I also liked the costume that was designed for Jokerman…completely crazy and insane and top it all off with a jesters hat.

It will be interesting to see exactly what happens in the next issue. Clearly Joker is up to something devious and evil…but I’m sure Batman and Robin will be ready to spring into action to stop the Clown Prince. However I felt that this issue wasn’t as tight as usual…everything went by a bit too quickly for me and I felt a little let down by how fast I read this story. Although it was nice to see what Jokerman was up to, it felt like Batman and Robin took a backseat in this chapter…but maybe that’s what he was going for, if we felt the duo was getting forgotten then we could probably understand their reaction at the end when they declare their retirement.

Overall, a very decent story and I am looking forward to next issue where we see Jokerman taken down.