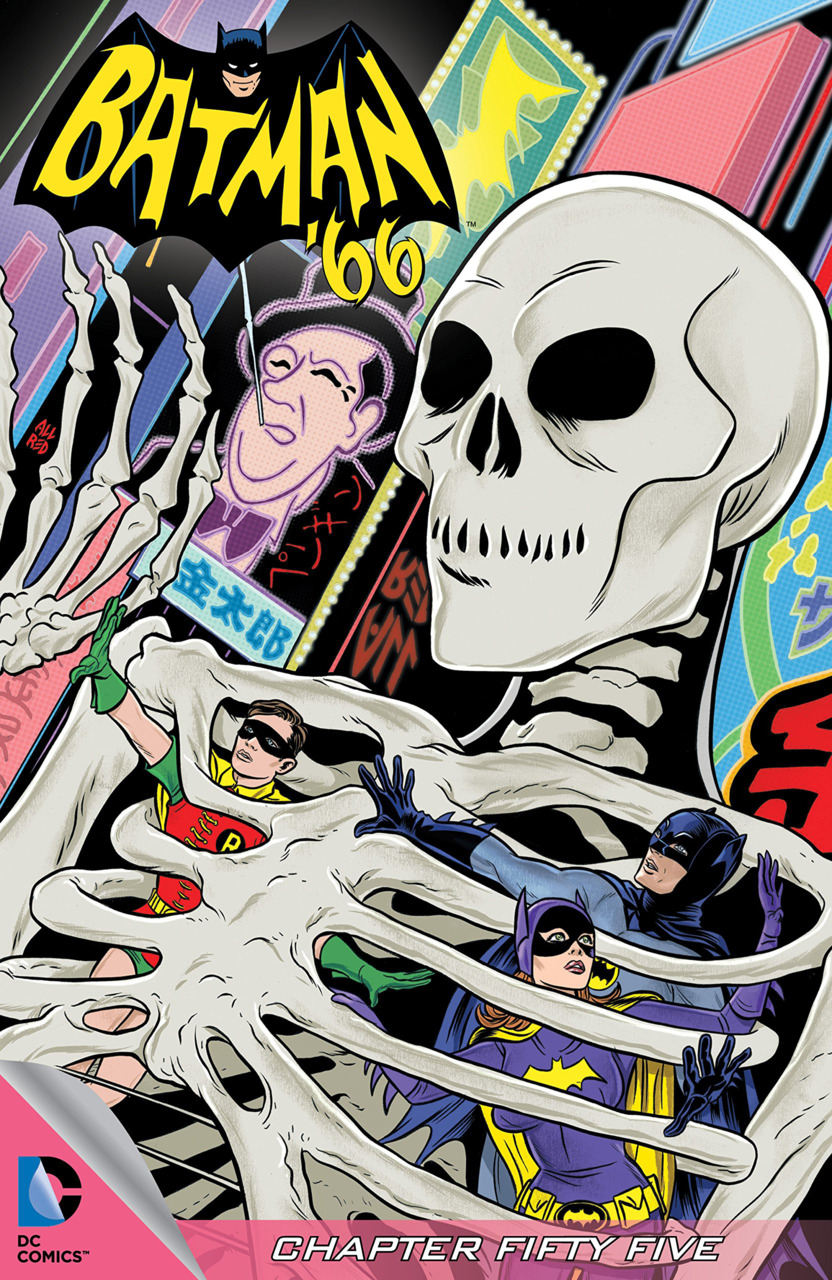 Beginning where we last left our caped crime fighters, Batman and Batgirl slowly engage the group of ninjas that previously descended from the trees on the orders of the criminal known as Lord Death Man. As they begin to engage their opponents, Batman counsels his ally on how to not become overwhelmed by the numbers…just like eating an elephant – one bite at a time (Although quickly counters that he would never, of course, actually eat an elephant…they are a noble beast). As Batgirl kicks one ninja, he quickly vanishes in a puff of smoke…so too does another punched by the Dark Knight. Batman quickly realizes Lord Death Man was using illusions to make the perception that his ninjas were far greater. In another puff of smoke, Lord Death Man disappears.

Picking up his trail of footprints, the two heroes pursue the villain…until suddenly they both succumb to a trap and fall into a dark cavern. As they land upon a pile of skeletal remains, they are confronted by a spectral image of Death Man that taunts them. The two soon depart throughout the network of caves seeking their rival. Batman and Batgirl end up discussing Death Man and his differentiation between Death Man and Batman’s other costumed villains. While talking, Batman turns to seek an answer from Batgirl…only to find Death Man wearing her cowl. As Batman pursues a fleeing Death Man, the villain taunts the Caped Crusader that his ally is dead. Death Man continues to taunt Batman by stating that the only way to see Batgirl again is to meet his death…and that after they are through, he will set his sights on Gotham City. Meanwhile Batgirl is shown to have gotten lost in the tunnels.

Cutting to a colossal skull on the side of a cliff, Death Man and Batman continue their chase across a narrow strand of rope strung between two opposing cliff faces. Continuing to taunt his foe, Lord Death Man states that his next target will be Robin since he did not make the journey to Japan (see last issue). As the rope begins to snap underneath the combined weight of the two men, Batman comes to the realization that he is being tricked and jumps to safety. As Batgirl appears, she informs him that she followed the sound of the arguing voices until she found him. As the rope finally snaps, Lord Death Man plunges to the river below and seemingly meets his end.

As a new day dawns, Batman and Batgirl discuss how Batman may have been doused with a hallucinogen during the battle with Penguin…this explains his strange visions of Death Man (seen throughout these two chapters) and why he was acting so irrationally in the caves. As the two depart in the Batmobile-J, a villainous laugh can be heard emanating from the shrine of the deceased Death Man.

Well I have to say that I thoroughly enjoyed these two stories. I rather enjoyed that we got out of Gotham City and away from Batman’s traditional villains…as well that this adventure feature a solo team up between Batman and Batgirl.

The story was pretty intriguing, although I felt that the build up from last issue fell just slightly short of the finale in this part of the story. I liked that Batman and Batgirl battled against the ninjas…but the fight ended rather quickly. Although, a nice nod was made to the original show when Batgirl was seen only kicking the ninjas throughout the panels…rather like Yvonne Craig was tasked to do on the TV series.

The art in this story was done rather well, all of it nodding nicely back to the source material of the ’66 show…and I rather liked the use of DC Squared with the disappearing ninjas in smoke, as well as the blowing trees and leaves seen at the end.