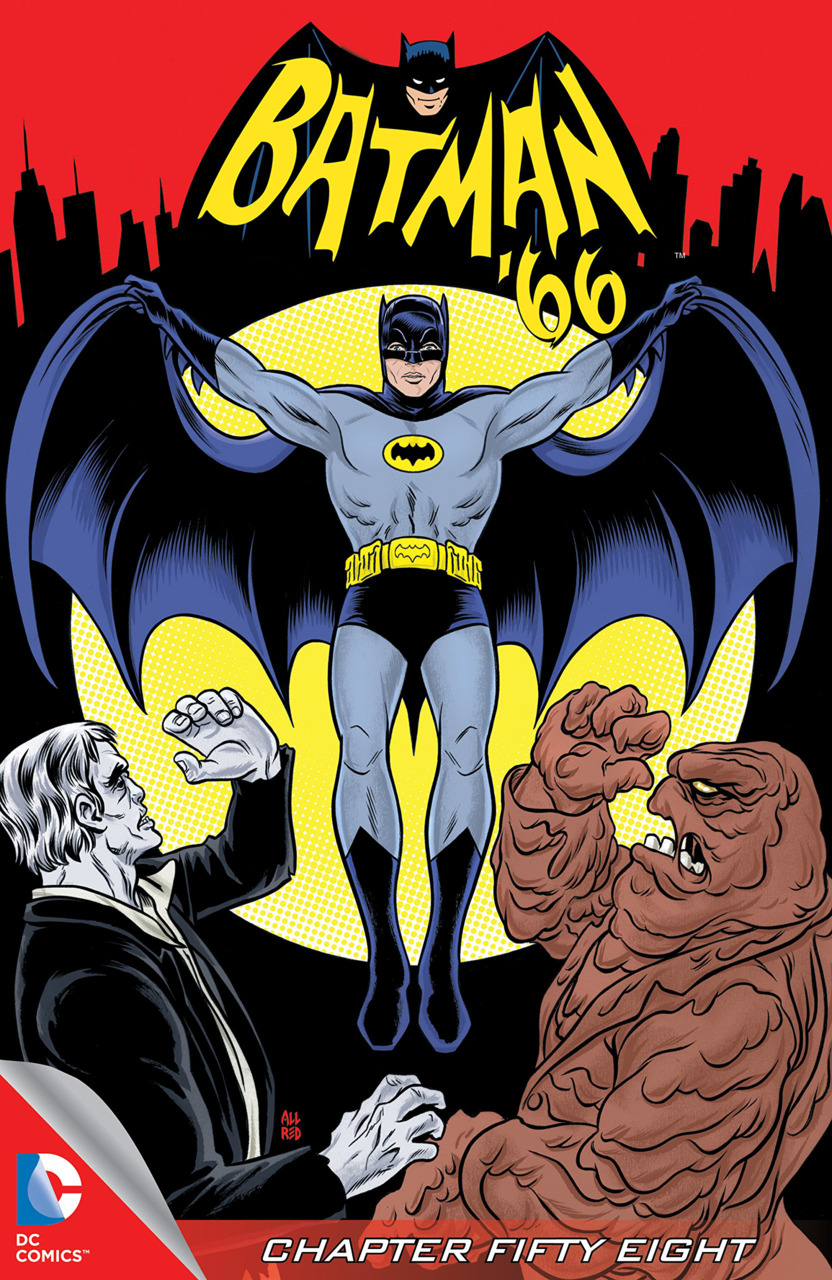 This week’s chapter of “Batman ’66” opens with the batmobile rushing into action. As they pass by an electronics store, a message can be seen on the television screens of Hilda – aunt to the infamous Marsha, Queen of Diamonds! As Hilda threatens to unleash “Cyrus,” Robin turns to Batman and wonders if Cyrus was the name of Marsha’s grand mogul. Batman says it isn’t and makes a reference to how Marsha uses her aunt’s potions to manipulate the rich and powerful – one being Cyrus Gold who was an Olympic wrestling athlete…however, what’s more troubling is that Gold is dead.

As they arrive at Gotham Cemetery, they find Hilda casting some sort of enchantment before the grave of the former Olympian. As she pours some potion onto the ground, the trees come to life and ensnare the two heroes…this proves a brief distraction as Hilda continues to pour more potions and acid into the area above Gold’s coffin. As Batman marvels at the science behind it all, the Caped Crusaders quickly free themselves and drop to the ground…just as the undead Gold rises to the surface – now christened Solomon Grundy by Hilda.

As Grundy advances on Batman and Robin, he quickly picks up a tombstone and hurls it at the heroes. As they begin to engage their foe, Hilda accidentally falls into an open grave. Batman then swings into action before Grundy can strangle an ensnared Robin…this leads to a chase through the cemetery and leads the duo back to the batmobile. As Grundy quickly flips the car, Robin distracts the monster as Batman prepares to attack once again…with quick thinking Batman connects a pair of jumper cables to the undead zombie and shocks him with the atomic power of the batmobile. The issue ends with Batman noting that Grundy has only been put into a form of stasis…and we also see Hilda calling for help from the grave she fell into.

Well this was definitely a quick read and introduced another character into the ’66 mythos – Solomon Grundy. Although I’m not too familiar with the character of Hilda, I liked that she used her magic potions to summon up a monstrous character to do her bidding.

Unfortunately there isn’t much to talk about in this issue…the story begins and wraps up within this one chapter. That’s something that I feel weakens this series is when they start out of the gate with quick one issue stories…I prefer to see the two part stories, but would be interested if they considered a longer arc such as 4 or 5 chapters.

I did like seeing the references to past “Batman” creators littered on the tombstones in the graveyard…there were mentions of Neal Adams, Bob Kane, Dick Sprang and even the cover artists Mike and Laura Allred. It’s always a nice touch to see Easter eggs such as this within the books…something similar was done in the “Osiris Virus” storyline where the heroes get buried alive and the tombstones show the names of heroes and villains such as Deadman and even Solomon Grundy himself.

Overall this was an okay issue…as I said the story starts with Batman and Robin already in pursuit of Hilda…then there’s a decent battle within the graveyard against Grundy, and then Batman takes him down with the bat-jumper cables.