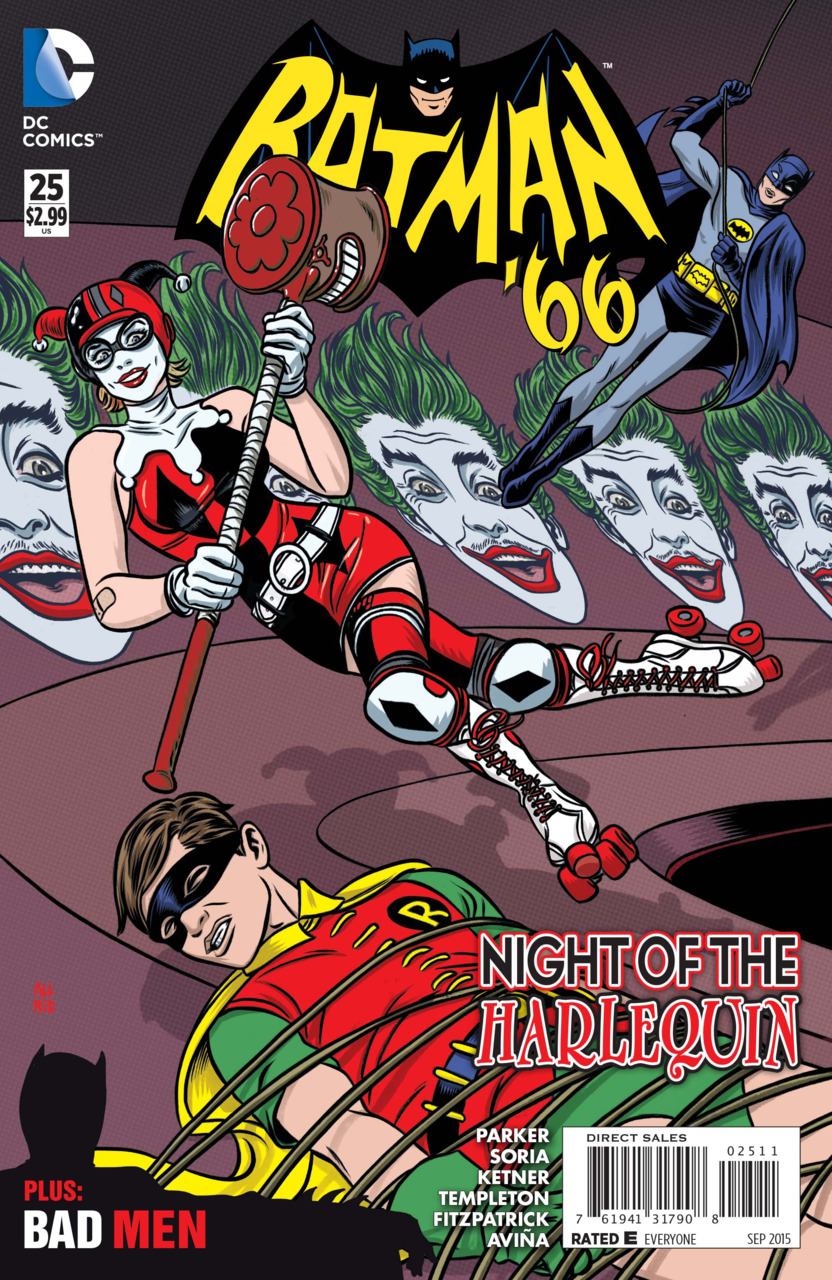 The Dynamic Duo find themselves being attacked by booby-trapped pies in a bakery. They have come to save the baker who has been assaulted and tied up. Batman finds a Joker card in the Baker’s pocket and decides to pay a visit to the Arkham Institute where Joker currently resides.

Curiously, Joker is safely behind bars at Arkham so Batman decides to check in on the other comedic inmate at the Institute – Dr. Harley Quinn. The Doctor on call says that she is safely in her cell. Batman discovers that the woman locked up is not Harley however, but Nurse Fitz. Harley has left behind a letter taunting the Dynamic Duo.

The Caped Crusaders rush to the Batmobile so they can begin their hunt for Harley. However, there is a box in the Batmobile from which a spring loaded hand presses the ejection seat button sending Batman and Robin flying into a nearby tree. Harlequin is in a motley hot air balloon watching our heroes’ predicament. She is enjoying herself.

Batman tries to convince her to return to Arkham. She refuses and it turns out she has stolen Commissioner Gordon’s Batphone. Batman tries to foil her escape with a Batarang but Harley catches it in a net and floats away.

Harley goes on a crime spree robbing banks, stealing pizza, putting whoopee cushions on the Mayor’s chair among other dastardly atrocities. She decides to form a gang to help ease her workload so she invites toughs from around Gotham to meet her in a warehouse by the docks. She doesn’t know who to choose for her gang until one of the ruffians suggest they fight it out and the last five guys standing are in the gang. Harley agrees and the wild rumpus begins.

Two prospective gang members do very well and defeat all the other hooligans. Harley tries to stop the pair from beating up all the others but they won’t be stopped. After the melee they go to their duffel bags and change their clothes – it is Batman and Robin!

They slap the cuffs on Harley and take her off to Arkham. She asks how she did: was she as good as Catwoman and Egghead? Robin tells her that she is definitely getting there. The End.

The second story in the book begins when Joker, Penguin, Riddler and Catwoman (Eartha Kitt version) show up at Barbara Gordon’s advertising agency asking for her boss. They evildoers want to run an ad campaign to improve their image. The ad exec refuses.

Barbara imagines what she would do if she had her Batgirl costume with her but sadly her suit is not at hand. Instead she decides to join the felonious foursome in their ad visions. With the rest of the office tied up the team spends hours to try to come up with a name for their new ad agency. They all want their names to be the first in the acronym and fight about it. Barbara says she has an idea as to what to name the company and spends some times with an artist to come up with a presentation. She shows the crew her idea which is to create “Penguin Patrol”. This begins an all out attack on poor Penguin with his three jealous partners giving him what for.

Barbara takes this time to call her Father, Commissioner Gordon to come pick up the criminals. She says she defeated the gang with office politics.

Gosh I love this dumb book. As I’ve mentioned before I grew up with the ’66 Batman so this really resonates with me. Since I am also a Harley Quinn fan I love to see her reimagined into that world. She would have been a perfect fit with Cesar Romero’s Joker and Burgess Meredith’s Penguin. In retrospect its hard to believe that she hasn’t been a part of the cast of characters forever.

I like how she is done here, you can hear her Brooklyn accent in her dialogue and the corny chatter between Batman and Robin is pitch perfect. Also, she is Dr. Harley Quinn and The Harlequin here, not Dr. Harleen Quinzel and Harley Quinn. I don’t know why but that seems fitting for 1966 Gotham.

The art here is ok, not terrific, but clear. And the action is well explained and funny. I would rate this book higher but there really isn’t any meat on the bones which is both the magic and problem with Batman ’66. I love it from a nostalgia point of view but I don’t for a minute think it is a powerful book like some others.

So, if you are a fan of slapstick and corny LBJ era dialogue by all means pick up this title.