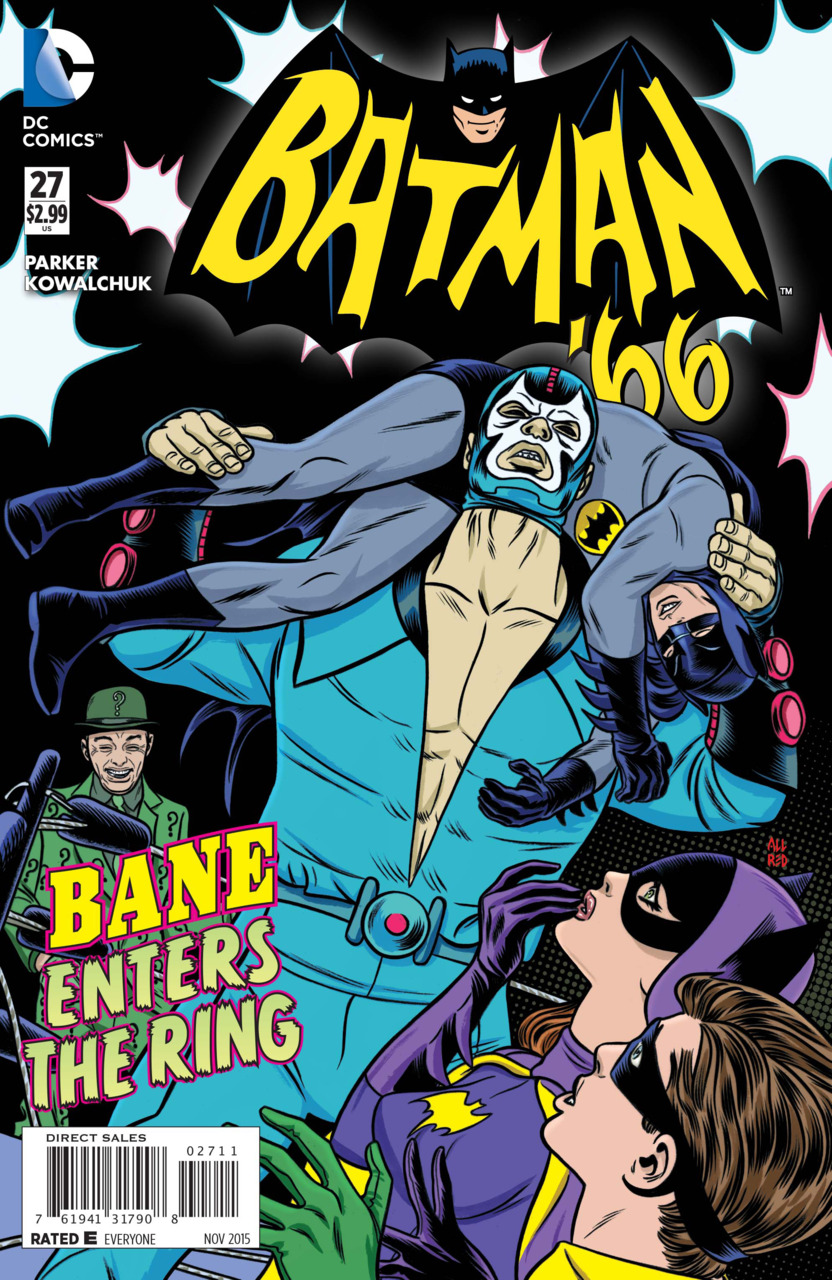 Batman and Robin travel abroad as they battle the terrifying Bane in the wrestling ring in the latest issue of Batman ’66 #27.

Are you ready for spoilers….

A drugged and woozy shopkeeper is being robbed of a crystal skull to a to a well dressed and mustachioed man when a Batarang smashes across the thief’s face. It is Riddler in a realistic mask. Batman and Robin try to interfere with the dastardly mastermind but Riddler is ready with a gas which knocks the Dynamic Duo out. He makes his escape with the skull. Riddler, as usual, has left behind a riddle suggesting he is going to ‘steal a ring’. After some smart detective work by Batgirl, the Caped Crusaders solve the riddle and head off to a wrestling match where someone called the Hangman is going to fight another someone called Bane. Uh oh.

At the match they see Bane, who the announcer reports is from south of the border, enter the ring. The trio notice that Riddler in in his corner. Bane makes quick work of his opponent, the Hangman. Batman enters the ring but after some rough fighting is hurt badly. Robin and Batgirl join the fray but they do no better. Batman is smashed over Bane’s leg to the delight of Riddler. They gloat that Batman has apparently been broken in two.

Days later in Mexico, Bane and Riddler are flying in a helicopter extolling Bane’s victory to the people of Mexico and are defying anyone to challenge him.

En route to Mexico via Batboat, Batman, Robin and Batgirl discuss the Batarang that saved his spine from Bane’s attack. They are making their way to Bane’s Mexican village to get back the crystal skull.

Already in the village Commissioner Gordon and Chief O’Hara are unsuccessfully trying to blend in so they can find Bane. Chief O’Hara has a shamrock on his sombrero for crying out loud. They ask some of the villagers if they know Bane when Bane returns in an army vehicle like a conquering hero. Bane displays the crystal skull saying it has returned to its home. Riddler spots and exposes Gordon and O’Hara and imprisons them in a pyramid.

The village is having a series of wrestling matches. Our heroes take advantage of the distraction to release the prisoners. It turns out that the crystal skull is the secret ingredient in making a strength potion that Bane is using to increase his powers.

Finally Bane enters the wrestling ring and is attacked by Batman. Batman, expecting something like this, throws a device that locks over Bane’s mouth so he cannot drink the strength potion. Bane is still pretty strong but is no match for the quicker Caped Crusader who gives the larger man a decent beating. In the commotion Batgirl cuffs Riddler as Batman invites the local wrestlers come to finish off Bane which they do with great abandon.  Until next month…

Batman ’66 delivers exactly what you would expect month after month. It is a book that trades on nostalgia even when it is using relatively new characters. It is light hearted but never really rises above the level it seems comfortable at. The story is simple and straightforward as usual but isn’t great. That isn’t necessarily a knock on the book because I think it is exactly what it aims to be.

The art in this issue seems a little less reminiscent of Adam West, Frank Gorshin and the gang than previous issues portrayed their ’66 counterparts. I realize that may be a silly reason to knock this book but nostalgia is really it’s raison d’etre so if it doesn’t deliver an authentic experience it isn’t really working. I’m going to give this issue a mediocre rating, I’ve given it more leeway in the past but this issue seems a bit less than what it could be.