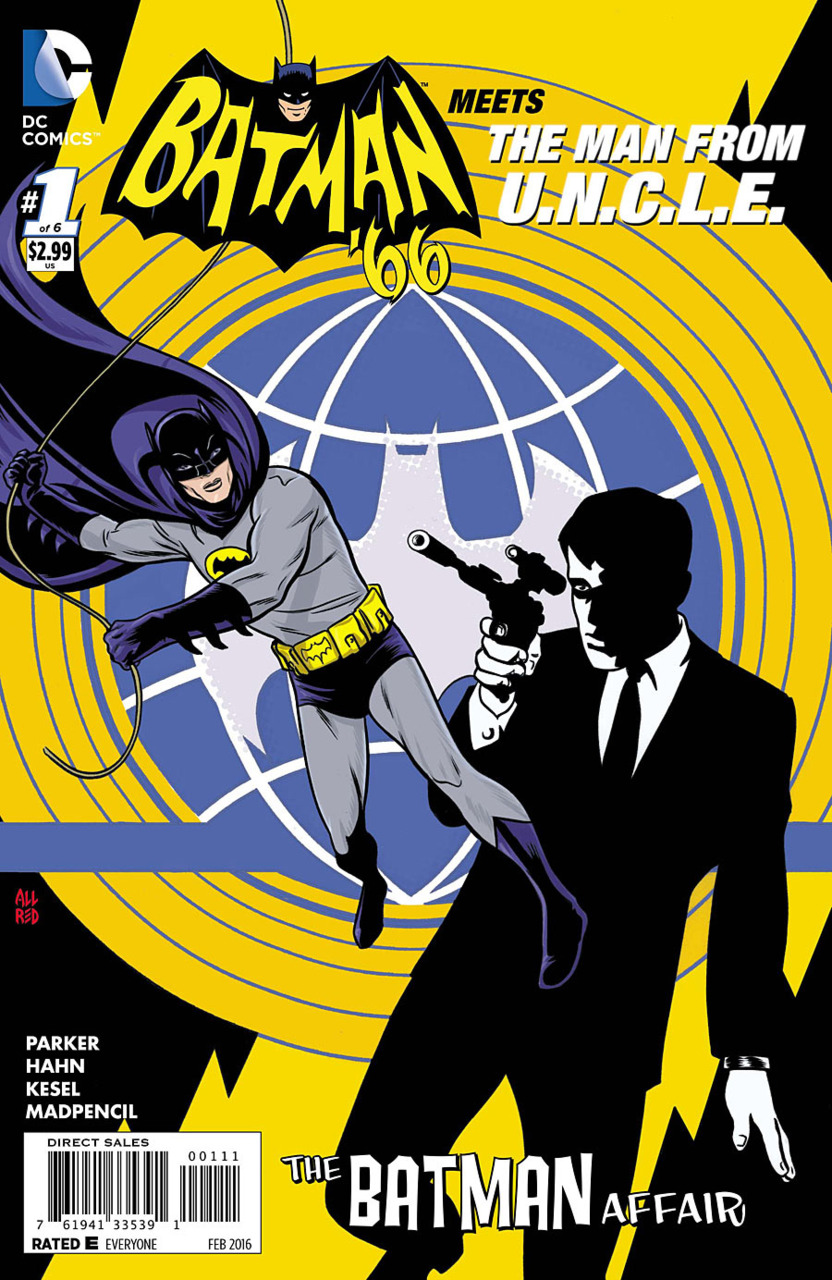 Spoilers of all nationalities below…

There has been a mass escape at Arkham and several supervillains are on the loose. Robin attends to Dr. Hugo who is apparently still groggy from the knock out gas. Batman has captured Penguin and is interrogating him. Penguin says that he was the mastermind of the prison break but Batman points out that all the other escapees made it out safely and that Penguin was an obvious decoy as he was captured so easily. Being a stooge doesn’t sit well with Penguin and he promises to tell Batman everything he knows about the breakout.

Meanwhile two men in dark suits enter an ordinary tailor shop in the East 40s of New York City. The shop is just a front however and the pair are allowed into a futuristic (for ’66) command center. They are agents of the law enforcement group U.N.C.L.E. – United Network Command for Law Enforcement.

The enforcement agents are the American Napoleon Solo, the Soviet Illya Kuryakin and are led by their British chief Alexander Waverly. They are fighting a crime syndicate called T.H.R.U.S.H. Apparently THRUSH is involved in the breakout at Arkham and they have intercepted some communications from the operatives. The agents understand the extreme abilities of those escapees: Scarecrow; Sandman; Poison Ivy; Egghead; Mr. Freeze; and The Siren.

U.N.C.L.E. is also aware of Gotham’s masked vigilante, Batman. However, they suspect one of the ringleaders of the prison break may be millionaire playboy Bruce Wayne. Wayne is one of the main benefactors of Arkham and has knowledge of its inner workings which makes him a suspect. Apparently T.H.R.U.S.H. has been converting wealthy business people to its organization and Bruce Wayne seems like a perfect fit for the evil organization.

Bruce Wayne is having a party the next evening and the three men are going to attend the gala. Waverly is an old friend of Alfred Pennyworth and is going to be able to get an invite to the shindig.

Outside Gotham a van carrying the escaped prisoners enters a seemingly abandoned airfield. The driver orders the six super villains out of the van. Some of the baddies are suspicious of their benefactor, others are happy to help him and others intend to pay him off and be on their way.

Suddenly the ground beneath their feel falls away and they drop into an underground lair. A mysterious voice can be heard letting them know that he knows they intend to betray him as soon as they have the chance. However, this won’t be allowed because if they do not cooperate they will be sent back to prison. Now they are all members of T.H.R.U.S.H. Until next month.

When this series was announced I have to admit I was a little puzzled as to the tie in. Yes, both the ’66 Batman and Man from U.N.C.L.E. were on TV at the same time and lived on in re-runs. However, I don’t recall U.N.C.L.E. being nearly as successful and iconic as the Adam West Batman show. I know there was a 2015 movie that didn’t do very well at the box office so I imagine the owners of the U.N.C.L.E. brand must have an aggressive sales team.

Reservations notwithstanding, this issue was a nice little setup for this series. The Batman ’66 franchise (I guess we can call it a franchise now) is never going to be daring or groundbreaking. It is going to live or die by the nostalgia factor and the tightness of its storytelling. In the previous ’66 incarnation we had a super villain of the week, which worked well there. In this version we are going to get an ongoing story which seems interesting so far. Writer Jeff Parker has delivered a good super villain/crime-syndicate setup that neatly brings both the Bat and U.N.C.L.E. Universes together.

In my past reviews I have been critical of B’66 when the art didn’t capture the images of the original cast well. I don’t think I’m going to worry about that here too much because of the continuing nature of this story. The U.N.C.L.E. characters drawn by penciller David Hahn, inker Karl Kesel and colorist Madpencil bear only a passing resemblance to the actors Robert Vaughn, David McCallum and the great Leo G. Carroll. Also, the supervillains don’t look anything like their ’66 screen counterparts. Though at times Egghead has a passing resemblance not to Vincent Price but to Humbert Allen Astredo, the actor who plays Nicholas Blair in the 60’s soap Dark Shadows (yeah, 60’s TV geek at your service). However here since there is a real story to follow I’m going to focus on the book as a whole and forget about that concern.

I’m going to give this issue a good rating more because of its promise and compact set up than for its groundbreaking story telling. If the Batman ’66 universe is your cup of tea, or you are intrigued by it, you should give this issue a try.