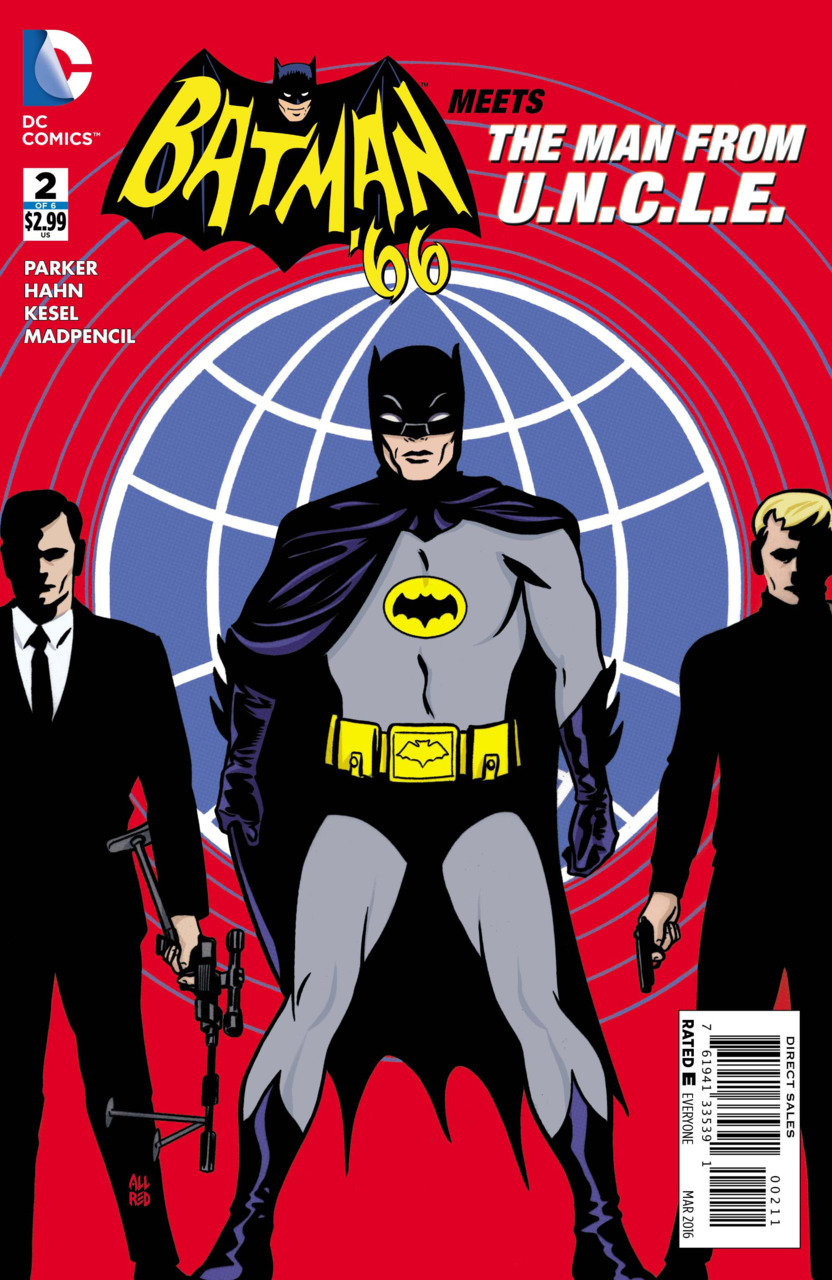 The Dynamic Duo and Batgirl team up with the Men from UNCLE as they try to protect a scientific breakthrough on Batman ’66 Meets the Man from UNCLE #2.

There is a party at Stately Wayne Manor. Commissioner Gordon arrives with his daughter Barbara and greets Bruce. Everyone is there to see the W-1, which is some kind of 60s era space gizmo.

Bruce also meets Alfred’s old friend (from UNCLE) Alexander Waverly who has brought along Napoleon Solo and Illya Kuryakin (also from UNCLE). They ask Bruce why he has put the W-1 on display. Bruce says it would be more secure here at Wayne Manor than if he let everyone into the top secret lab.

The lead scientist, Professor Anders Overbeck, is introduced and thanks Bruce for bringing him into the project. Overbeck dismisses the rumor that there is a curse on him. Before he can finish declaring himself uncursed a strange helicopter comes out of the sky broadcasting egg related puns. Ugh, Egghead. Bruce and Dick race off to the Batcave as bombs are dropped from the helicopter.

Poison Ivy is also in the air ship and dispatches some Plant-Men to the ground to wreak havoc on the party goers. Illya finds the vegetative creatures are immune to gunfire. Luckily an incoming Batgirl discovers that they are not immune to a healthy kick in the chest. Ivy swings down and gives Batgirl a taste of her own medicine. Finally Batman and Robin arrive on the scene. Ivy wraps Batman up in some vines while one of the Plant Men grabs Robin. Alfred and Waverly leap into action and launch the flambe fire onto Robin’s attacker. Illya cuts Batman loose from the vines and the two disable another Plant Man.

Just as all of the vegetarian party crashers are disabled the team notices that the W-1 has been stolen and leaving with the Helicopter. The bad guys escape with the valuable space device. Until next month…

As usual the Batman ’66 franchise delivers a perfectly serviceable adventure. 1960s era American pop culture is on full display here and it lends some emotional distance to plot lines that could be presented as more grim and gruesome in another milieu. In this story, the McGuffin is the W-1, whatever that is. I expect that the writer, Jeff Parker, will mine the irony of having the Russian Kuryakin assisting the recovery of the W-1 in pre-moonlanding USA. There will likely be some Red Scare tropes weaved into the dialog. Parker has set the story up well.

I particularly like having Alfred and Waverly being old Military Intelligence buddies. The ’66 Batman show didn’t identify Alfred as a former tough guy as far as I remember. That was a more modern addition to the character and one that I’m glad they have added here.

It is also fun to see Barbara Gordon come to the party at the beginning of the story since you know full well that Batgirl is soon to be on the scene. The anticipation and knowing Barbara’s ‘secret identity’ is cute and fun in this series where in another book you wouldn’t even notice it.

The art by Karl Kesel, David Hahn and Madpencil is serviceable and evokes the 60s time period well. Nothing too exciting though I do like all of the violet hues and Lichtenstein-like pixelation in some of the frames.

I am not going to criticize this book for some of the cheesiness of the plot, characters and art. That is the bread and butter of this series. However, because of its pedestrian nature I also can’t give it too high a rating like I did with the last issue of the regular Batman ’66 comic. That one was a one-time nostalgia trip that can’t be replicated. This is a good old fashioned WHAM BAM POW caper nothing more or less.