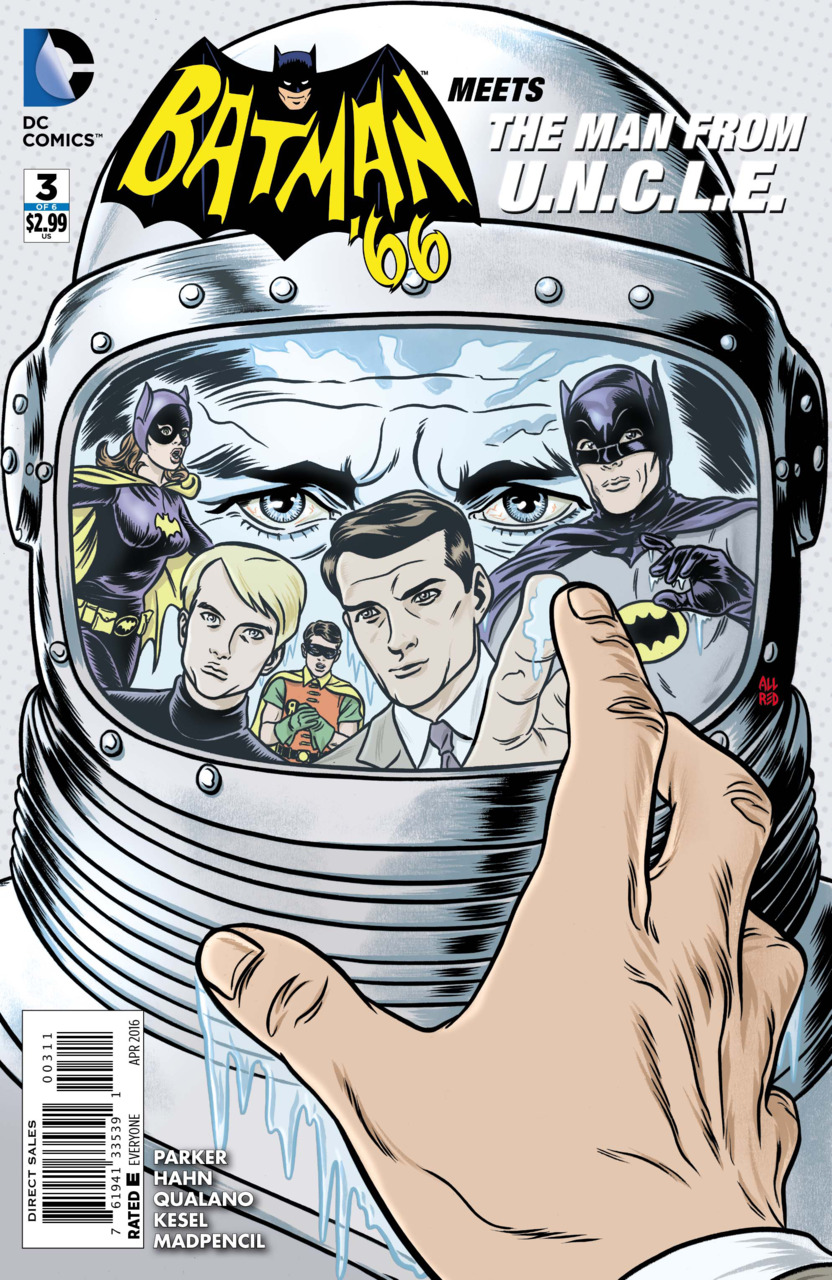 The Dynamic Duo travel to Europe with Batgirl and the Men from U.N.C.L.E. to stop the dastardly plans of T.H.R.U.S.H. in Batman ’66 Meets the Man From U.N.C.L.E. #3

The Caped Crusaders bring Batgirl to the Batcave. She has been rendered unconscious for her safety, you can’t have Batgirls running around able to find the Batcave after all. After she is revived she is astonished to see that they are going to do a newfangled video phone call with the Men from UNCLE. When they sign on they are surprised to see an apocalyptic video of a nuclear blast on the screen. It turns out that the good fellows over at UNCLE were just watching the video that the evil members of THRUSH had been sending to leaders around the world. Whew.

UNCLE tells about THRUSH: an organization of independent spys that are managed by a series of councils whose aim is to destabilize and control the world. The agent that is currently causing the ruckus is code named Corvid. Corvid has apparently been using Batman’s rogues gallery members to divert attention away from THRUSH. Why blame a mysterious organization when the bad guys are bad all on their own?

UNCLE has found a bookstore owner that (conveniently) overheard the evil plans of Corvid and his gang. She got a good listen before they hit her with a bookshelf. She says that team THRUSH are trying to establish a permanent base off the coast of Monaco. They also spoke about Mr. Freeze disabling a boat with an iceberg and a terrible sounding ray that sunk a cargo ship. Also, a group of Ambassadors have apparently been knocked out by the sleeping dust of Sandman.

Batman, Robin and Batgirl join with UNCLE in Monaco to get to the bottom of things. The next night there is a party of bigwigs that the team believe will be attacked by Sandman and Siren. The problem is that THRUSH knows the Men from UNCLE and the Bat Team would stick out like a sore thumb. Who will attend the party incognito?

Batman says he will go, and removes his cowl exposing his secret identity (Spoiler Alert) Millionaire Bruce Wayne! Until next Bat Month….

The plot by Jeff Parker is humming along quite nicely in this issue. This isn’t a comic one takes really seriously or has high expectations for. But this combination of the Caped Crusaders and the Men from UNCLE is exactly what you would expect it to be: good old fashioned cold war hysteria mixed with some action and ironic humor. Strangely enough there wasn’t a single action scene, it was mostly exposition and moving pieces around on the board. However the story stays interesting the whole way through. And the shock ending with Bruce revealing himself, wow. How are they going to rewind that reveal? Batgirl now knows Batman’s secret identity which would be a game changer, however there must be some way to take it back.

David Hahn and Pasquale Qualano’s pencils and Madpencil’s colors work well. The art is clear and a little cartooney which is expected in this through back title. There are some very good images such as one of the Batplane and the introduction to the house in Monaco that are particularly well done.

The rationale behind showing the H-Bomb footage on the Video Conference is a little strange from a plot perspective, though well drawn.

The shock ending of this issue will boost the rating a bit. Don’t get the idea that this is a terrific book, but it sure is plenty of fun and a nostalgia trip for those so inclined.