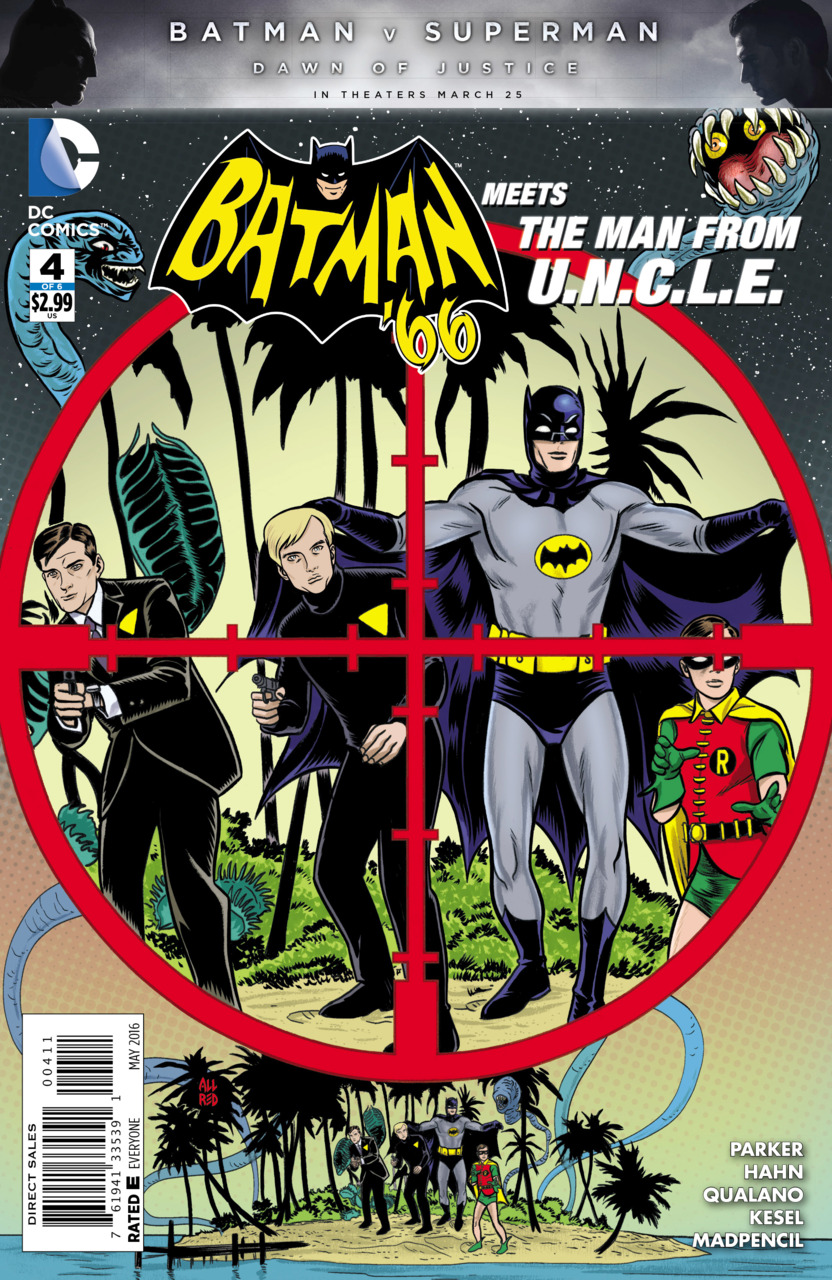 The Dynamic Duo and Batgirl Join the Men from UNCLE to uncover the fiendish plot that unites Batman’s Rogues Gallery and THRUSH in Batman ’66 Meets the Man From UNCLE #4.

Previously on Batman ’66 Meets the Man from Uncle, the Caped Crusaders were in Morocco with Batgirl and the Men from UNCLE trying to infiltrate a party where they could get intel on the evil organization THRUSH. They needed someone to attend the party but the Men from UNCLE were too well known to the baddies to gain unfettered access. Batman pulled off his cowl and revealed himself to be Bruce Wayne.

As this issue opens Batgirl helpfully points out that Batman looks very much like Bruce Wayne and Bat-Bruce thanks her but warns that the Bat-synthetic flesh mask is very delicate. Smooth move Bruce.

Bruce attends the party and is greeted by the Princess of Monaco who is concerned about her husband that is making some worrisome changes to the government. The new members of his cabinet are Doctor Somnambula and Madame Circe, famous troublemakers on the lam from Gotham. The men from UNCLE show up as Bruce’s bodyguards and Circe sings a song to try to hypnotize them. Luckily they sport protective eargear and are immune from Circe’s siren call. The Princess tries to get the same earplugs for her husband who she suspects is being affected by Circe but Bruce says he won’t be able to get close enough to help.

The Men from UNCLE are being followed by some bad guys when Robin pulls up in a bulletproof British Batmobile which provides cover for the ensuing firefight. The UNCLE Agents win the fight, killing their attackers much to Robin’s astonishment.

Robin gets in touch with Batgirl who is keeping an eye on Bruce at the party. They are taking Bruce to the Marina where they board a freighter equipped with a submarine. Luckily Batman has had the foresight to bring his own Batsub which the Men from UNCLE, Batgirl and Robin use to follow the freighter out to sea.

Writer Jeff Parker turns in another solid chapter to this Batman/Man from UNCLE mashup. This issue is lighter on the 60s nostalgia than past issues but the story is humming along nicely now so it isn’t really necessary. The cliffhanger in the last issue, when Batman revealed himself to be Bruce, was played for yuks this time. It must be so unbelievable that Bruce Wayne could be Batman that she immediately jumps to the conclusion that Batman had been wearing the Wayne mask all along. It is far fetched, but if you were looking for realism you wouldn’t be reading this comic, or any comic book for that matter.

The pencils by David Hahn and inks by Karl Kesel are the strong and cartoony effort that is the standard for this book. Some faces, like the Princesses, are usually strongly drawn. Others, mostly male characters, are often simple and suggestive rather than realistic in any way.

The colors by Madpencil are a particular standout. There is a scene where Bruce is being ‘seduced’ by Circe that contrasts the blue of Bruce’s tuxedo with the orange and yellow of the background in a very vivid and dynamic way.

This comic is what it is. If you are a fan of 60s nostalgia or just want a simple old fashioned Batman story you can’t go wrong with the ’66 series. Just don’t expect too much and you’ll have a good time.