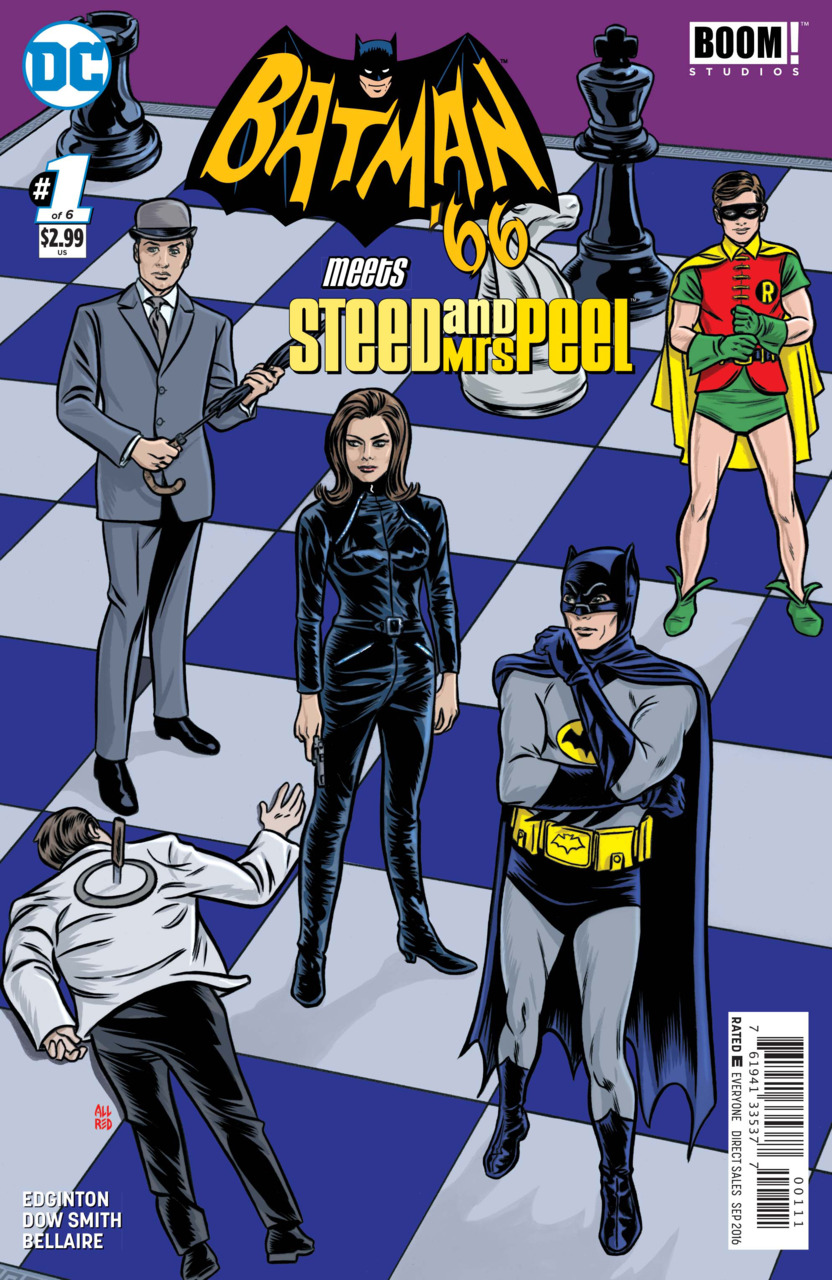 The Caped Crusaders join up with Steed and Mrs. Peel from British Intelligence to track down the jewel thief who has been purloining precious gems around the world.

Bruce Wayne is accompanying Michaela Gough, the head of the British company United Automation, to a rare gemstone exhibition. The redheaded Michaela’s corporation is working with Wayne Enterprises so the two are getting acquainted. One of the gemstones on display is the enormous White Star Diamond on loan from the British royal family.

Suddenly Catwoman and three henchmen enter the exhibition and begin to smash up some of the displays to get at the gems. Bruce uses his wrist communicator to signal the Batcave.

Robin and Alfred get Bruce’s distress call and head to the exhibition, with Alfred in his own Batman costume.

Back at the exhibition, Catwoman takes Michaela’s earrings and decides that her henchmen should teach Bruce a lesson. However, a female figure appears and disables the three henchmen. A bowler hat wearing man trips up Catwoman and captures her. The two heroes are Steed and Mrs. Peel, from the 60’s TV show The Avengers, I mean British Intelligence.

Michaela faints and is caught by the gentlemanly Steed. Robin and Alfred-Batman arrive just in time to help take the four baddies away. Their exit from the exhibition is witnessed by a mysterious male figure wearing a hat, long coat, and dark sunglasses.

Later at Police Headquarters, Commissioner Gordon formally introduces the Caped Crusaders to the British Intelligence agents Steed and Mrs. Peel. Gordon had invited the pair to Gotham to help protect the White Star Diamond from being stolen. There have been a rash of gem thefts recently and they wanted to see if they could capture the thief. The diamond on display in Gotham was actually a replica, bait to lure the robbers. They realize that Catwoman couldn’t have done the other robberies since she has just been released from prison. Therefore, there must be someone else behind the crime wave.

However, a pen in Steed’s jacket pocket is actually a disguised transmitter and the whole plan is being broadcast to a mysterious redhead who is alarmed that the team is going to question Catwoman about her sponsor.

Outside Police Headquarters, three mysterious men, in the same outfit of hat, sunglasses and trench coats answer a call and head into the jail cells. The trio make their way into Catwoman’s cell and attempt to assassinate her. Catwoman punches one and finds that he isn’t a man at all, but some kind of robot.

The Caped Crusaders, Steed and Mrs. Peel arrive in time to find the Cybernauts about to attack Catwoman in her cell. Until Next Month…

Batman ’66 Meets Steed and Mrs. Peel is a six issue mini series in the style of the just ended Batman ’66 Meets the Man From U.N.C.L.E. which turned out to be a solid outing. However, the creative team has changed. This issue was written by Ian Edginton with art by Matthew Dow Smith and colors by Jordie Bellaire.

Sadly, the opening issue in this mini series doesn’t have the quality of it’s predecessor. Edginton’s story is solid enough, but the art and colors are not up to par. The lines are clumsy and some faces are drawn as if the character is in dire need of an antacid. The colors are bland and unimaginative and occasionally needlessly blotchy.

If you have read my past reviews of the Batman ’66 books you know that I am a bit of a sucker for these series’. I am disappointed to say that based on this first issue I can’t recommend you buy this book. The story is perfectly fine but the art makes it a frustrating and uninspiring read.