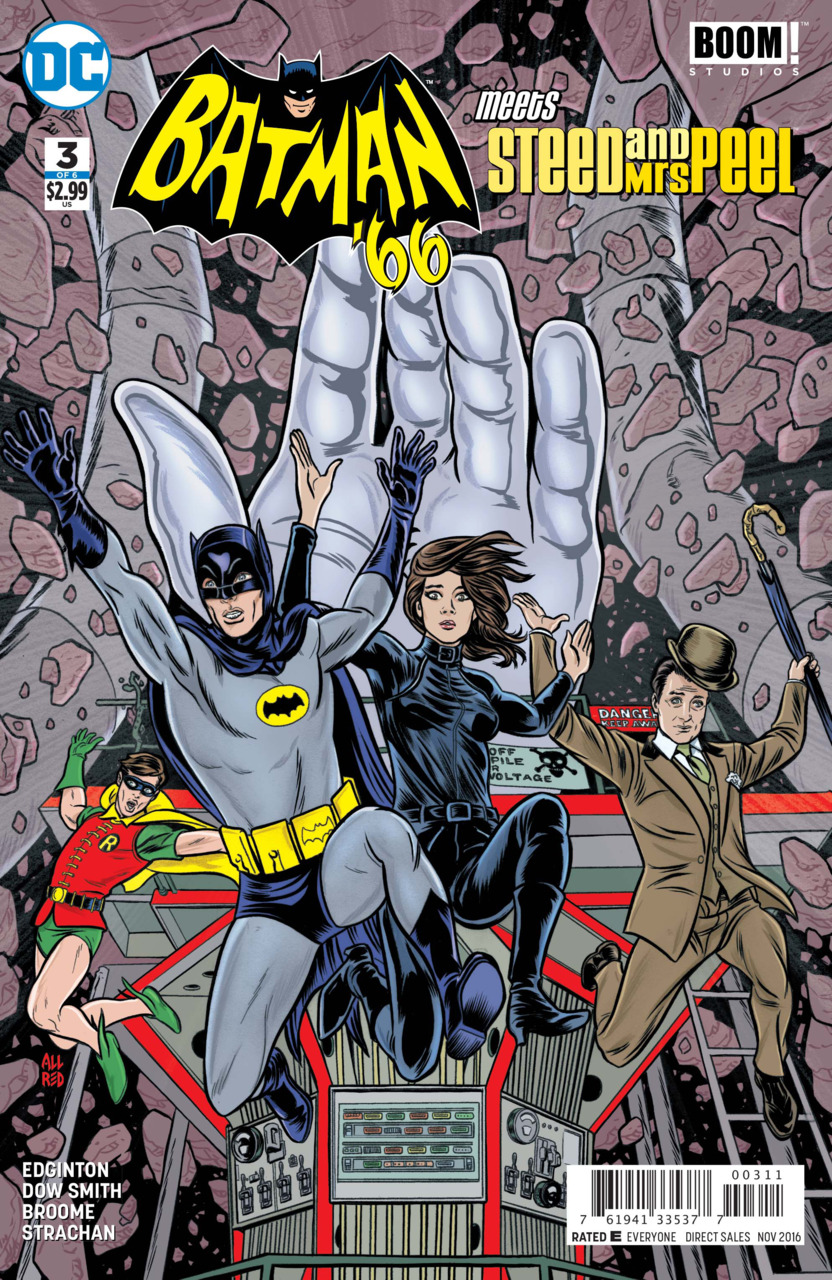 The Dynamic Duo, Steed, and Mrs. Peel are on the prowl for the master of the Cybernauts. Watch them battle the metal monsters. Marvel at their deductive powers. Laugh at their killer bee dance in Batman ’66 Meets Steed and Mrs. Peel #3.

The Caped Crusaders, Steed, and Mrs. Peel are in the Batcave examining the robot with the diamond brain they have recovered. The technology used in the machine is extremely advanced, enough to conquer the world. Suddenly the Batcave intruder alarm goes off and a Cybernaut army breaks into our heroes’ lair. Steed realizes that it is the pen/beacon in his pocket that gave their location away.

As the team fights off the Cybernauts, Batman readies an electromagnetic pulse which knocks out the robot army just in the nick of time. The pulse also disabled Steeds’ pen homing device but Batman endeavors to reactivate it so they can find the location of their enemy.

Meanwhile, the red headed robot commander is on a picture phone call with a character that appears to be Mr. Freeze. She says that the White Star Diamond was a fake and that the real one is still in London.

Having discovered the location of the evil doer, our four heroes make their way to an isolated lighthouse where the homing device is sending its signal. They are spotted as they make their approach. When they reach the top of the lighthouse they meet their nemesis – Michaela Gough. When she fainted back in the first issue, she put the homing device in Steed’s pocket.

Lord Fogg arrives in an airship so Michaela can escape. He sprays down the do gooders with a cloud of killer bees as they make their getaway. Mrs. Peel, who apparently knows much about bee psychology, encourages the four to perform a shuffle step dance that persuades the bees to collect on the other side of the room. Seizing the opportunity, Batman opens the door so the four can escape. Having made it to safely Batman decides that they should follow Fogg’s airship since Bats also have wings. Until next month…

Writer Ian Edginton gives us a silly but serviceable Batman ’66 story. There are some funny moments (one with Alfred and Aunt Harriet) and half decent characterizations of the guests Steed and Mrs. Peel, although they don’t really pop like some of the depictions in the old Batman ’66 book did.

It wouldn’t be fair to judge any of the Batman ’66 titles in the same way as other, more serious, comic books. Batman ’66 plays on nostalgia and is intentionally ridiculous at times just as the old TV show was. It isn’t too much of a problem that the diamond technology of the robot brains is silly and unworkable. A generous reader can accept the absurd Killer Bee Dance that saves the day in the lighthouse. One could even forgive that the reveal of Michaela Gough was anticlimactic since it was telegraphed since the first few pages of the mini.

There are a few things that one should expect of the comic, however. The problem with this mini so far has been the consistently lackluster art. The artist Matthew Dow Smith and colorists Wendy Broome and Carrie Strachan are delivering a lower and lower quality product as the mini progresses. Here the lines are the same clumsy effort of past issues. But this time there seems to be something wrong with the colors. It is almost as if there were some printing problem that caused the whole affair to be seen through a dirty lens. Everything is dull and lifeless, almost hazy. It is a real distraction to the issue as a whole.

I am partial to the Batman ’66 series seeing that I am in the target market for the nostalgia that is in the very DNA of the franchise. While I enjoyed seeing Alfred and Aunt Harriet their two panels don’t make up for the low quality artwork and the increasingly absurd storyline. Because I don’t think expectations are ever very high for the Batman ’66 titles I am not going to rate this issue terribly low, but the title doesn’t seem to be going anywhere.