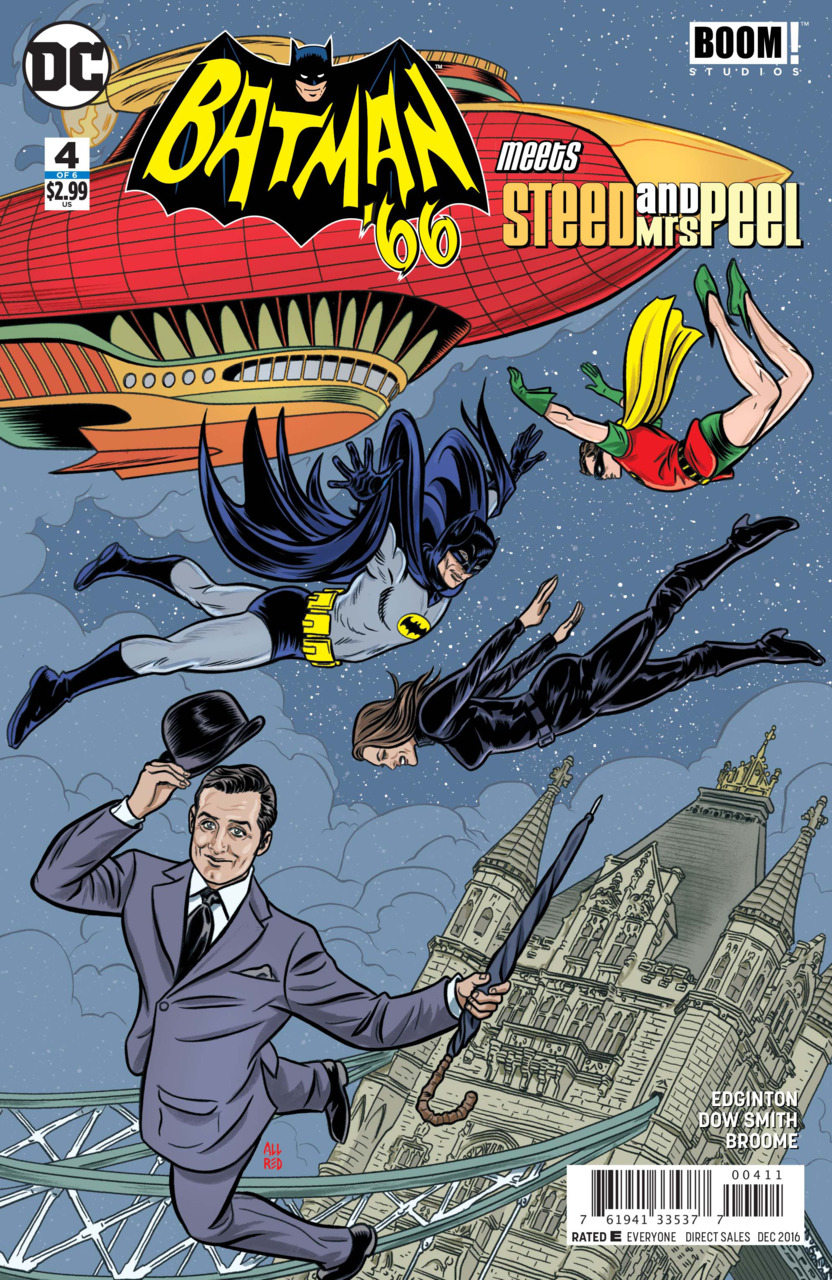 Lord FFogg and Michaela Gough are making their escape from the Caped Crusaders and they-who-must-not-be-called-The-Avengers in Ffogg’s steampunk aerochopper. They are still planning on stealing the White Star Diamond from the Tower of London. An alarm goes off- they are being chased by our heroic quartet. Batman and Mrs. Peel are in the Batplane while Robin and Steed are in the Batcopter. Gough dispatches some flying Cybernauts to disrupt their pursuit. With some fancy maneuvering and Robin’s well timed electronic signal disruptor, both Bat-airships manage to defeat the robots but Ffogg’s ship has disappeared into the clouds. In other news, Mrs. Peel has guessed Batman’s secret identity and Michaela Gough intends to catch herself a bat.

Mustachioed Bruce Wayne and Dick Grayson head to England on a commercial jet in disguise. It would do no good for people to know the wealthy playboys were in London if Batman and Robin coincidentally show up. They are met on the tarmac by Steed and Mrs. Peel in a sweet jalopy and head off to the Tower of London.

Gough goes to visit her father who is unable to see her on account of being behind a curtain. She says she is taking care of his ailment and gives him a mysterious present. Mr. Freeze interrupts the visit with the news that their trap has been sprung.

Bruce and Dick join Steed and Mrs. Peel at the Tower of London. The diamond appears to be safe, but there is a strange cold spot in the room. They find coolant keeping the place frosty. Bruce discovers that what appeared to be the diamond is really a large block of ice. The Beefeaters standing guard turn out to be Cybernauts. Apparently the new security installation was done by Freeze’s men who stole the real diamond. Gough presses a button in her command center which shuts our heroes in the room with the robots. Bruce has a lot of his anti-oil formula prepared and unleashes it on the mechanical menaces. However, Gough is too smart to fall for the same trick twice. The Cybernauts has a non-stick polymer coating and break through Bruce’s spray.

Writer Ian Edginton continues to give us a solid tale of jewel thievery. The story and basic concept of this issue, and miniseries for that matter, continues to be solid. In this issue, we have a good aircraft battle between our heroes and the bad guys which turns out to be fairly exciting. There are a few odd touches however. Why does the writer have Mrs. Peel guess Bruce’s identity? She has her reasons for figuring it out but has no more business figuring it out than the thousands of other characters that have seen both Bruce and Batman over the years. Also, in the Tower the uncostumed Bruce and Dick openly call each other Batman and Robin. I know they are supposed to be in disguise but, like, in fake mustaches.

The problem with this miniseries that continues with this issue is the art by artist Matthew Dow Smith and colorist Wendy Broome. Both the lines and the colors are at fault here. The faces are terribly clumsy looking. This issue has Mrs. Peel looking particularly out of whack. There is also shading or shadows on the character’s faces that look almost random. Together these two problems combine into a very odd effect.

I could overlook some of the strange plot points I mentioned above, but the problems with the art in this mini are too much for me to overlook. It is too bad, because the story itself is pretty solid and could have been implemented very successfully. However, I can’t recommend this mini even at its $2.99 cover price. I have been lenient on my rating for this series up to now but I am going to be more critical this time around. Hopefully, something will happen for the better next month.