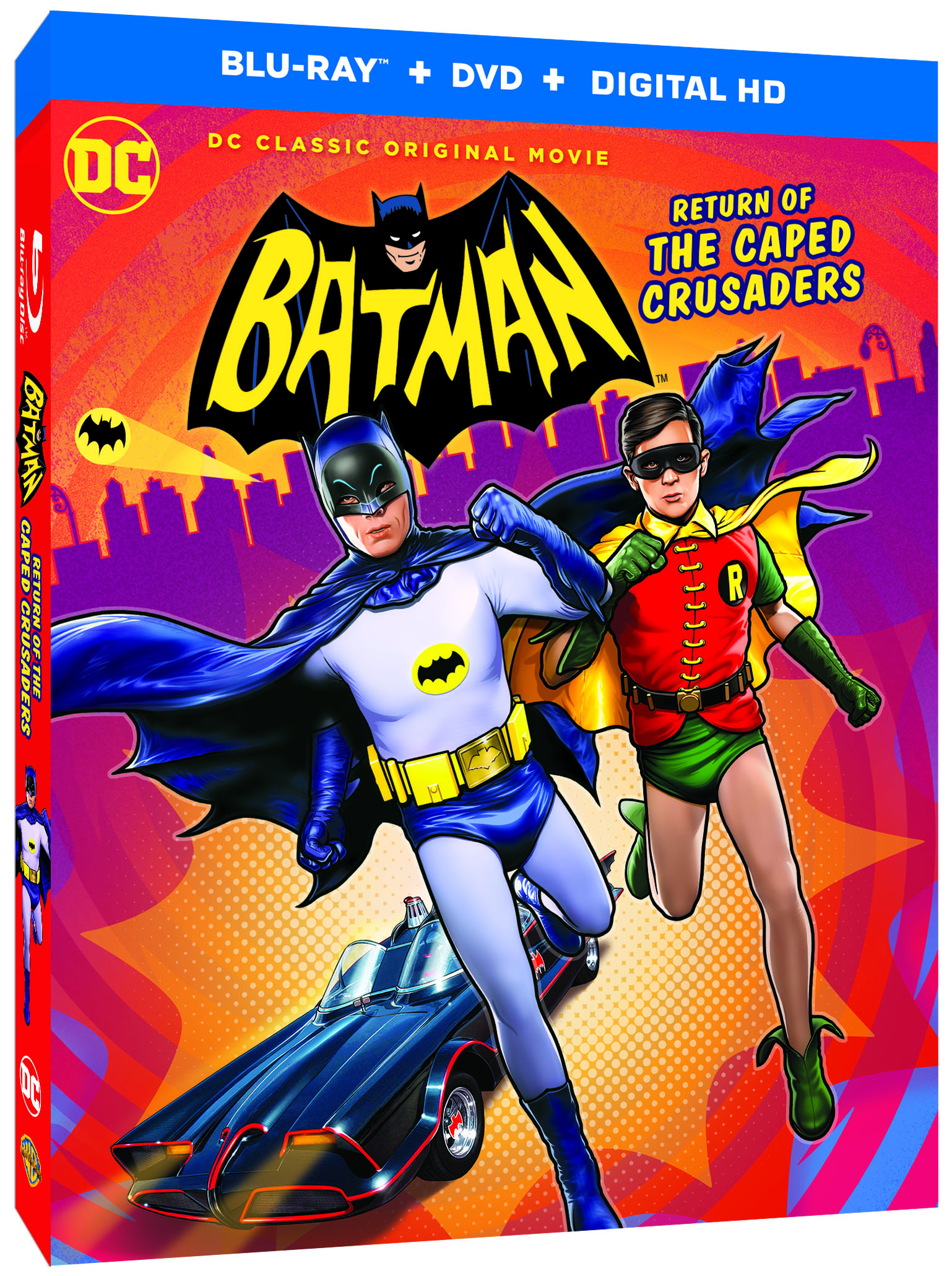 Sometimes expectation and nostalgia for the past overwhelms reality. But every now and then the nostalgia boom hits a goldmine, such as in the case of this movie! The 1960’s Batman show, a classic and a constant in so many childhoods through so many generations on so many Bat channels, comes flashing back in full animated glory in Batman: Return of the Caped Crusaders, the latest DC animated Bat-offering.

Overall the movie is a delight for casuals, and for the more dedicated fans out there, there is an extra aspect of class. Adam West (Batman) and Burt Ward (Robin) reprise their roles, as does the lovely Julie Newmar (Catwoman). The remainder of the cast is filled by voice actors who pretty much perfectly mimic the sound of the original voices, including Jeff Bergman (Joker), William Salyers (Penguin), Wally Wingert (Riddler) and Jim Ward (Commissioner Gordon). Having just watched the Batman ’66 live-action movie there is obvious parallels to this animated feature, the basic plot being the villainous team-up between Joker, Riddler, Penguin and the irresistible Catwoman.

This isn’t gritty Batman: Year One brooding character action or something dark and nightmarish such as Batman: The Cult, so contemporary Bat-fans need to remember that is essentially a tribute or reprise of the original show, not a parody or radical reinterpretation. This movie stands on it’s own merits and fulfills it’s promise to viewers, by delivering that key word: FUN.

Adam West was always the stand-out of the show for me, and he remains an impeccable comedian gifted with a light touch, able to expertly pull off Batman “straight man” act in the midst of campy chaos, just as he did so adroitly on the original show. When he busts down on Robin for jaywalking, we smile with a fondness, rather than groan. His asides make the material sing.

Much like on the old show, Batman as played by West, is a gravel-voiced defender of Justice amidst a circus of silliness. He gives minor life lessons throughout the action, and although the years may show in the voice, nothing is hindered as he hits his marks time and time again. As we hit the second half of the run-time the half-knowing winks to the audience ramp up, as West voices parts of Frank Miller’s dark, gritty Dark Knights Returns Batman, taking the words bizarrely out of context and into another realm of Batman pop fiction. In moments like that, it’s fascinating for viewers who have grown up with the dark, urban enforcer imagery that is the Bat franchise today, to look back at time when a lighter, almost effortless Batman performance was so captivating in the same role.

The animation is slick throughout, especially on the character models and I found myself captivated by the almost seamless transition to the format. If there is a certain sameness to some of the Gotham City street locales and backgrounds in general, the same cannot be said of Wayne Manor, which looks almost perfect and in sync with the show. When we see the red phone ring and Commissioner Gordon describe Batman as “a paladin of virtue”, its hard not to smile and be transported back to the days of yore.

It has to also be noted that the car looks superb and when Batman drives with the famous music playing in the background, as they hustle from caper to caper, taunted by the nefarious villains it’s hard not to smile and enjoy the offering for what it is. For all the mastery Adam West displays in his role, Burt Ward as Robin does a very solid job also, as he manages once again to emote in a manner which is eternally ageless as we allow ourselves to dream that we are back in the glory days of the show in whatever format you saw it in.

Even better, the highly comedic solving of puzzles and clues is as much a part of the show as ever, and Robin is an essential part of that, his deductive skills both insane and brilliant via some mighty leaps of logic for which he gets Batman’s praise. Indeed, it is interesting for a modern Batman reader or viewer to see how instrumental and effective Robin is to Batman back then. There is no real hint of dissonance in the relationship, something that was become such a trope in the modern era, as Batman seems to effectively hire and fire members of the Bat Family as the mood strikes, while still maintaining enough core members to form a small company. Whether it be Grant Morrison’s Batman and Robin run, or the more classic depictions, I still firmly believe the best Batman team pairs Batman with a Robin. In this movie it is pretty much the two of them, with Alfred quite helpful and the nosy Aunt Harriet making some amusing asides.

In summary, the coolest thing about the 60’s show (other than the car) was it’s madcap, fun nature, completely grounded by a still, measured performance of Batman by Adam West – flashing forward to 2016 with it’s love of radical, stripped-down reboots, it seems almost a miracle that the spirit has survived intact, and yet it has. And really, the ’66 Batman Batmobile is still the coolest car on the planet! Rock on, Bat Lovers!

Editor’s Note: Batman: Return of the Caped Crusaders is available in both digital HD and today on DVD and Blu-ray. You can purchase your copy of the film on Amazon now.