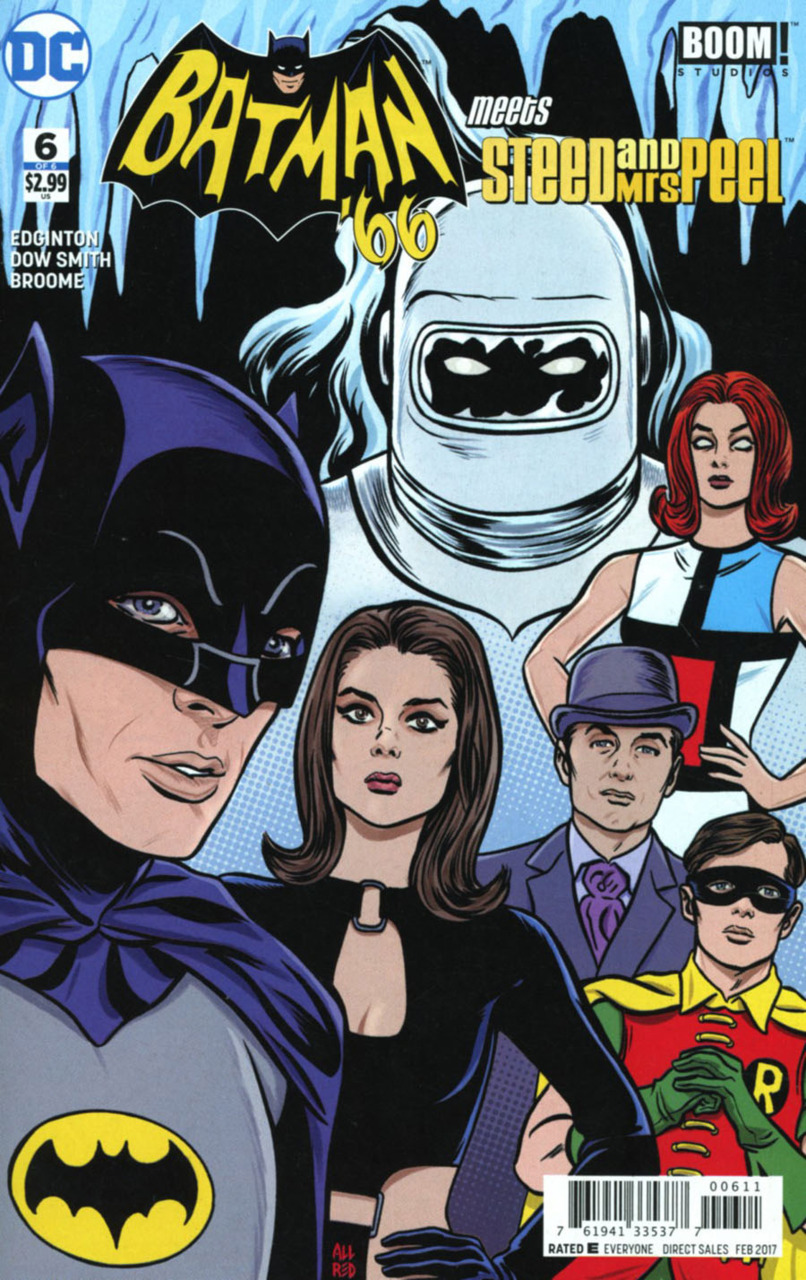 When we last saw our heroes, and Ffogg and Freeze, they were being attacked by four Cybernauts in the form of co-eds. Lord Ffogg is excited at the prospect of seeing the demise of Batman and Robin but Batman chides him and points out that Gough hasn’t been faithful to her partners in crime. This is borne out when one of the Cyber-gals punch a hole in Freeze’s suit. Batman uses the escaping gas to freeze the robot and seals up Freeze’s outfit with some handy-dandy utility belt gear.

Robin is able to wrap another of the fembots up with a rope and Mrs. Peel kicks her into two of her companions. The three robots manage to sort themselves out though they are badly banged up. Steed finds a switch on the floor that allows the good guys to descend into the basement where there are a number of the male Cybernauts.

Gough comes over the loudspeaker and says that this is revenge for the way that Steed and Mrs. Peel treated her Father. When world governments find out that her robots killed the two they will want to buy a robot army of their own. By killing Batman and Robin in addition to the two Avengers will certainly raise the price she can demand.

As Gough monologues, Batman shorts out some of the encroaching Cybernauts by turning on the sprinkler system. Steed asks Gough if this is really what her Father, Professor Armstrong, would have wanted. Gough says yes it is. Her Father had tried to download his consciousness into one of the mechanical men but before he could finish Steed and Mrs. Peel interfered. Armstrong had downloaded himself into the computer and Miss Gough has created a Cybernaut with the White Star diamond as a brain inside a head that apparently looks like the inventor.

Michaela attacks Steed but Mrs. Peel kicks her in the face which exposes Gough’s mechanical visage. Oh yes, Miss Gough is a robot. She sees herself in a mirror and is shocked, she doesn’t realize she is a Cybernaut too. In fury she punches the machine Professor Armstrong is connected to and the electric shock short her out.

Much later, Batman, Robin, Steed and Mrs. Peel are walking down an ornate hallway. They have discovered that Miss Gough was an advanced Cybernaut prototype. They make their way down the hall and are let through large doors by a pair of royal guards. They are there to meet the Queen. The End

This issue brings the Batman ’66 Meets Steed and Mrs. Peel story to a conclusion. Writer Ian Edginton has given us a solid story with a few bizarre twists that mostly work. Michalea Gough’s reveal as a Cybernaut was a decent surprise. How Steed knew to press a switch in the floor to get away from the co-ed robots isn’t explained but perhaps a closer inspection of previous issues would make that clear. Robin’s dialogue was particularly good and his working relationship with Mrs. Peel really popped.

As in past issues, the problem with the Steed and Mrs. Peel series has been the art. Artist Matthew Dow Smith continues to be crude. The faces on the characters are clumsy and mostly expressionless. The coloring by Wendy Broome doesn’t help either. The colors are bland and the shadows make the faces look very odd.

I am a fan of the Batman ’66 series and love the nostalgic aspect of the regular run and the mini series up to now. This particular story I can’t recommend however because of the problems I have with the art. In 2017 however, Batman ’66 meets Wonder Woman from the 1970s will be out in print which I am looking forward to.