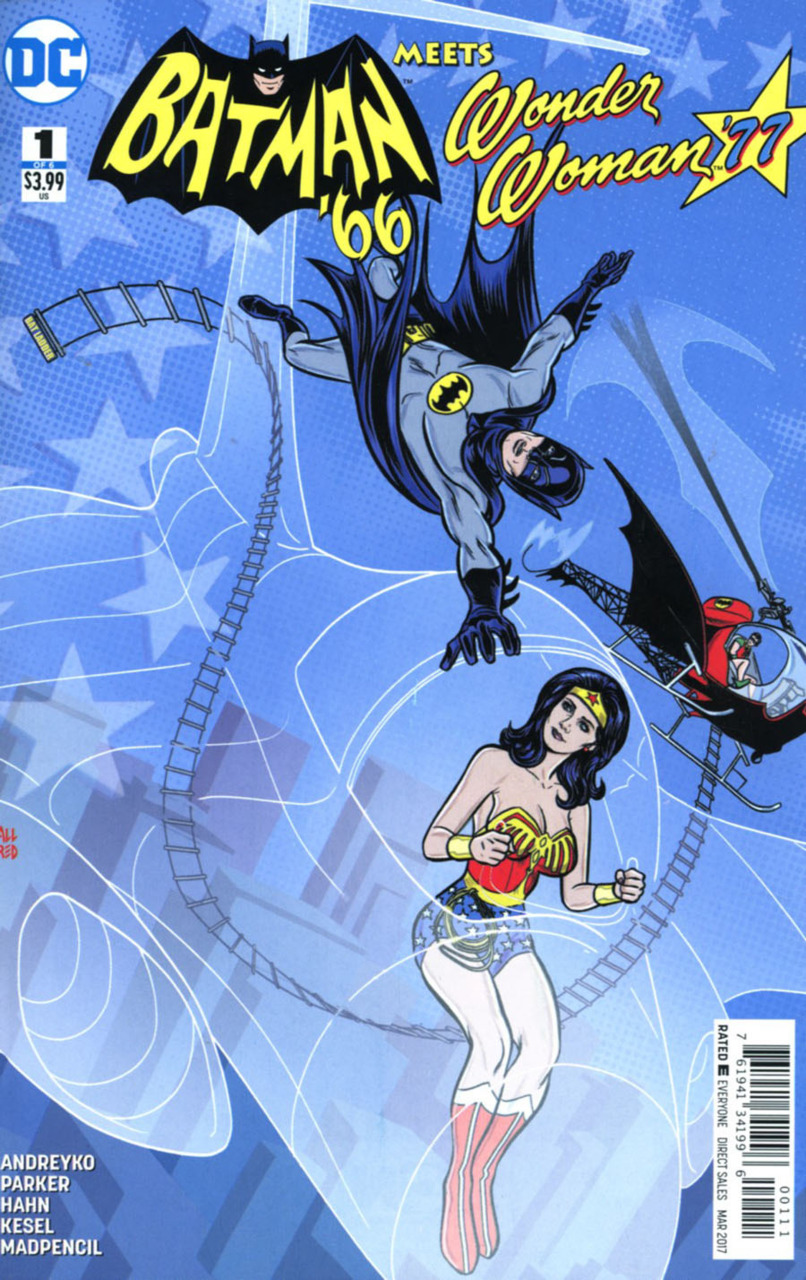 When a mysterious book is stolen Batman recalls the drama surrounding the tome from when he was a boy. That drama, of course, included Wonder Woman.

Catwoman, of the Eartha Kitt variety, steals a book entitled “Lost World of the Ancients” from the wealthy Mr. Findlay’s safe. She leaves his mansion and meets a tall brunette woman outside and hands the book over as she has been hired to do.

Apparently, Findlay’s house had an alarm directly to the Batcave so the Caped Crusaders arrive on the scene. The brunette lets Catwoman deal with the Dynamic Duo while she and her Father escape in a car with the book.

Batman subdues Catwoman and in return for a good word at her parole hearing she tells Batman that the woman’s name was Talia. She also hands over an ancient necklace she stole from Talia.

Back at the Batcave, Bruce finds that the necklace has a symbol used by a dangerous cult “The League of Shadows”. He and Alfred tell the story of the book and of meeting a great hero.

Twenty years ago, the Wayne Foundation was having an auction at Stately Wayne Manor. It was there that the young Bruce met a young Talia and her Father Ra’s al Ghul. They also run into some military officers: one smartly dressed woman named Diana, another lady named Etta, and a man named Steve. As the children run off to play the officers observe that many members of the Third Reich are at the auction.

There are a pair of books, named “Lost World of the Ancients”, being auctioned. Mr. Findlay wins the bidding against a severe looking man and Ra’s al Ghul. However when he goes to take possession of the books the severe man and his Nazi pals try to take the books from Findlay. Not to be outdone in the book thievery department, Ra’s has his henchmen also try to secure the books.

Steve confronts the several armed Nazis and Diana sees that he is outnumbered. Diana turns into Wonder Woman right before Bruce and Talia’s eyes and takes off for the impending melee. Steve and Wonder Woman fight the Nazis which gives Bruce the opportunity to spirit Findlay, his books, and Talia away through a secret door in a bookcase. Talia proves herself very capable in fighting off Nazis.

The secret passageway leads to a hedge maze. Wonder Woman goes out onto the grounds in pursuit as does Ra’s and his Shadows. Out in the yard, Wonder Woman fights off some Nazis while Bruce hides the books in a hedge. After running through the maze he runs into Ra’s who demands Bruce tell him where the books are. Until next month.

It is certainly good to get a well crafted Batman ’66 back on the shelves. DC is taking advantage of some of the Wonder Woman hype and using her ’77 incarnation is an inspired choice here. Elsewhere, DC and Dynamite are also doing a Wonder Woman ’77 Meets the Bionic Woman, another classic team up.

This story, by writers Jeff Parker and Marc Andreyko, seems to be in exposition phase. We are getting some back story about the stolen book and building the cast. So far, so good. The story isn’t thrilling in itself but is riding on the genius of the concept at the moment. But we are being set up for what looks to be a good yarn with a mysterious book, the al Ghul’s, and a particular Princess of Themyscira.

We are also back with an A-team of artists with David Hahn on pencils, Karl Kesel on inks, and Madpencil on colors. The style is cartoony which is perfect for the Batman ’66 franchise. However, the art is always clear and the characters effectively express emotion. Also, Wonder Woman looks great both as the proper army officer as well as in full WW regalia. The drawing is clearly based on Lynda Carter, the Wonder Woman ’77 actress, but not so much as to get in the way of the demands of the panels.

I am generally a fan of the Batman ’66 franchise and I am pleased with this book after my disappointment over the art of the Steed and Mrs. Peel mini. I feel like we are in for a good potboiler full of sorcery and Nazi-punching. Count me in.