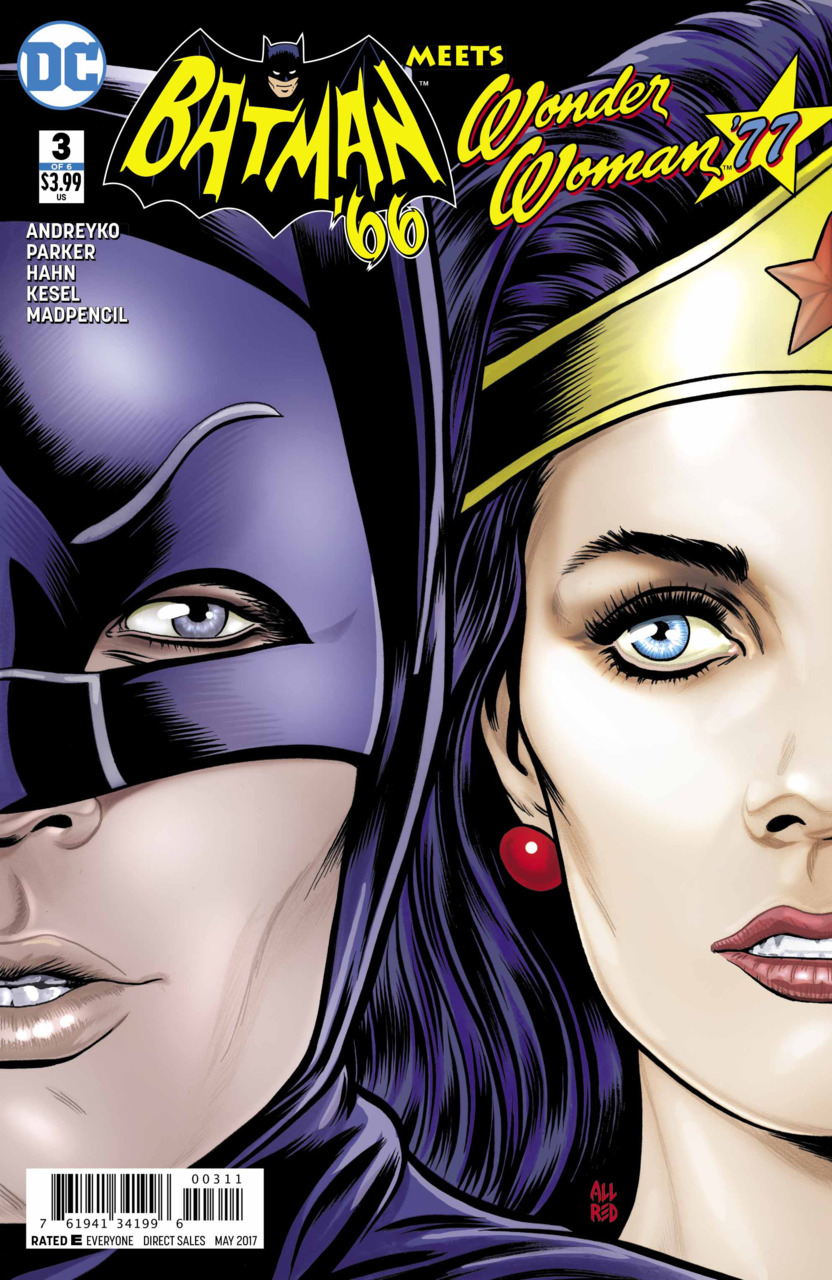 The Dynamic Duo head to Paradise Island to warn Wonder Woman that the secret location of her home might be compromised. When strangers assault an Amazon our heroes spring into action in Batman ’66 Meets Wonder Woman ’77 #3.

The Story (spoilers): Batman and Robin are in the Bat-Plane headed to Paradise Island. They were able to get Catwoman released from prison because they need a woman to accompany them on the female-only island. Batman wants to give Catwoman a chance to redeem herself because he believes that she has goodness inside of her. Wonder Woman greets them when they arrive and Batman explains his Selina reclamation project.

At the dinner table, Batman explains that the “Lost Worlds of the Ancients” books have been stolen and the Amazon’s hidden island is in danger of discovery. However, Batman doesn’t know why an outsider would target Paradise Island.

An Amazon rushes into the feast and reports that a guard has been attacked at the Southern Cove. When they arrive at the dock they discover that the interlopers stole a boat and went to the island of Garatos. Wonder Woman summons a wind that fills the sails of our heroes boat and takes them to Garatos, which has a temple in the center of a labyrinth. The temple has what is known by the Amazons as an Elysian Well, also known as a Lazarus Pit. Ah ha.

Garatos is a little creepy island and the Dynamic Duo, Catwoman, and Wonder Woman go into the maze. Batman leaves a homing device outside so they can find their way out. Inside the maze there are footprints that show two men dragging a third. The three are accompanied by a woman. Also, there are giant bird-like prints in the dirt. The walls of the maze shift which separates Batman and Wonder Woman from Robin and Catwoman. Bats and Wondey are attacked by a giant Griffin. The two go to fight the creature. Luckily Wonder Woman has a gift with mythical beasts and makes a friend of him.

Elsewhere inside the maze, an aged Ra’s al Ghul is being helped by his daughter Talia. Two assassins accompany them.

Robin and Catwoman are attacked by a giant Cyclops. All looks to be lost when Wonder Woman flies in to rescue Robin from the creatures grip. Batman soars in on the Griffin’s back to deliver a nasty spray into the Cyclops’ eye.

Batman and Catwoman take to the sky on the back of the Griffin to recon the maze as Wonder Woman carries Robin by their side.

Ra’s and Talia finally reach the Lazarus Pit. Old Man Ra’s strips and goes into the pool. The Demon’s Head soon emerges from the waters youthful and invigorated. Until next time…

The Breakdown: Writers Marc Andreyko and Jeff Parker are putting together a solid Batman story. The idea of having a Lazarus Pit on Paradise Island is a terrific twist, putting the drama behind the decades-old book theft behind. Also, the noble side of Batman is on full display here as he tries to rehabilitate Catwoman. His feelings for Selina are on full display here and it is a breath of fresh air to see his usual stern commitment to justice tempered by his compassion. This is the Batman I love.

Pencils are by David Hahn, Inks by Karl Kesel, and colors by MadPencil. The art follows the style of Batman ’66 books we have come to rely on: simple lines, clearly drawn action, strong primary colors, and sometimes abstract backgrounds. The resemblance to the TV Show’s characters is consistent but not slavish. The page of Ra’s emerging from the Lazarus Pit is strong and dramatic. The page with our heroes heading off on Wonder Woman’s boat is also well executed. The boat’s sail has the Wonder Woman logo on it, good to see that Diana is staying on-brand.

My Take: It is no secret that I love the Batman ’66 franchise. So far, this arc is the best of the ‘Meets’ sequence. The story is totally solid up to this point. I also love Ra’s and Talia as they make complex and compelling villains. But the best part about this issue in particular was the inclusion of Catwoman. I am a Bruce/Selina shipper and it was heartwarming to see Batman so sure of her innate goodness. They are two people naturally drawn to each other, but whose natures make a true relationship impossible. This story arc has been good for a third issue now so I am ready to goose the rating.