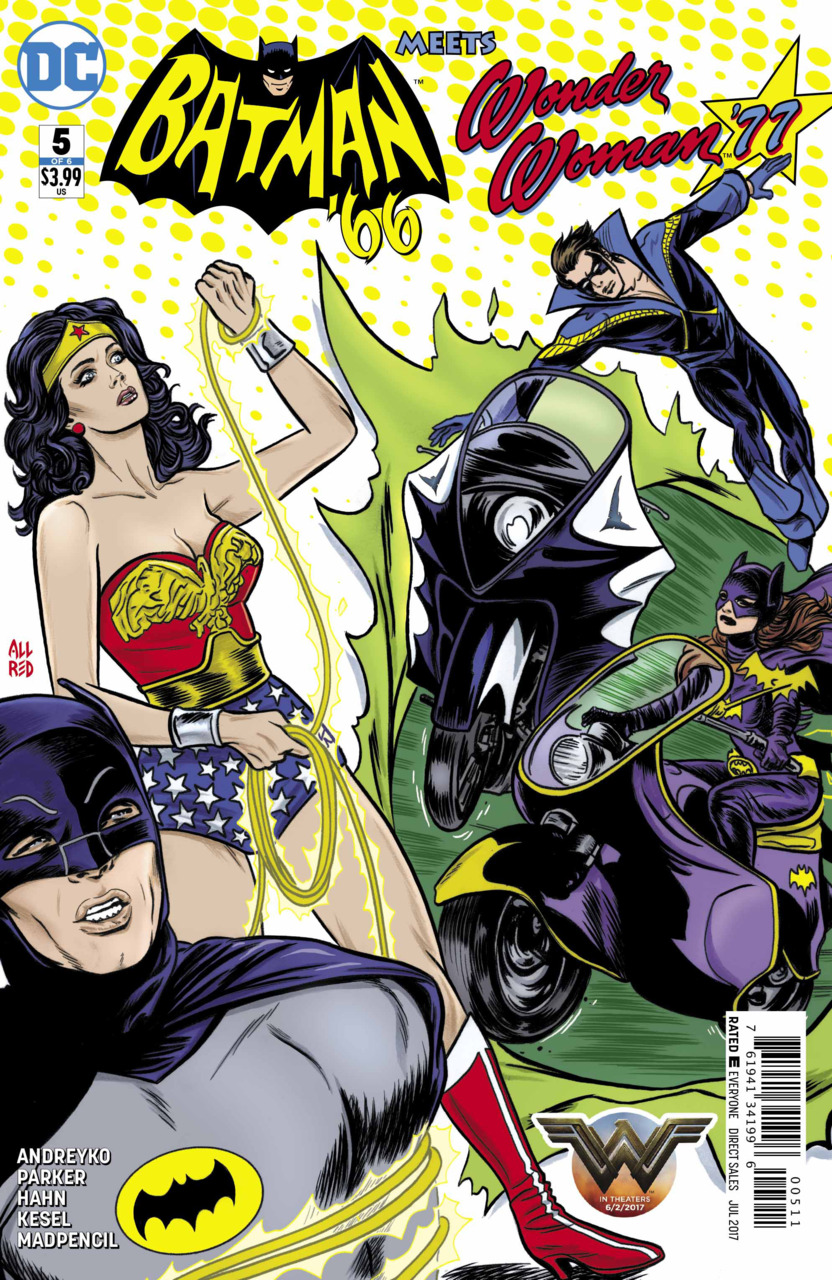 The Plot: Our story fast forwards from the 60’s to the year 1977. Wonder Woman is on the outskirts of Gotham City and breaks up a ‘Soors’ beer smuggling ring ran by Killer Croc. After putting the reptile villain on ice she is met at the scene by Police Commissioner Barbara Gordon and Chief O’Hara, the daughters of the 60’s officials.

Wonder Woman sees an Arabic symbol of the League of Shadows on the truck. Could the Al Ghul family be involved? They realize that they will need to inform the Dynamic Duo. However, Bruce has hung up his cowl and Dick patrols in his Disco Nightwing garb.

Wonder Woman visits the graying Bruce Wayne who is listening to a news report of the antics of the super villain named Copperhead. The two superheros greet each other and visit the now unused Batcave. Bruce retired because he killed the Joker in anger over the death of Alfred, and is guilt ridden over it. Wonder Woman tells Bruce that she needs him to help track Ra’s Al Ghul. He tells her to get in touch with Nightwing.

Dick is on a motorcycle on one side of the Snake Creek Canyon. On the other side, Copperhead is attacking Catwoman. Nightwing makes the jump across the canyon and is saved by the combined heroics of Nightwing and Wonder Woman. The pair catch up with each other and with Catwoman who is now on the side of good.

They drop Copperhead off at Arkham Asylum and Wonder Women tells them of the return of Ra’s. Wonder Woman asks what Ra’s could want in Gotham. Catwoman shows them some treasure maps she removed from Findlay’s book so many years ago. The maps show the earth back before the continents had their current shape. Bruce, alone in the Batcave, also analyzes the map. They all realize that the maps show the locations of Lazarus Pits across the globe and one is right under Arkham Asylum.

Talia Al Ghul suddenly confronts Wonder Woman, Catwoman, and Nightwing. Ra’s gets into the Batcave with some Assassins and threatens to kill Bruce. Until Next Time!

The Breakdown: Writers Jeff Parker and Marc Andreyko give us a story that lurches forward in time. The change is unexpected at first but makes perfect sense when you put it in the context of this title as a whole. The first few issues dealt with Bruce as a boy, the next two show Bruce in his Batman-prime, and now the final two will show an aging Bruce at the end of his career.

Batman killed the Joker and retired because of it. This may not be in official continuity, but the Batman ’66 universe apparently lives on its own. This detail works in the context of this story.

Penciller David Hahn, Inker Karl Kesel, Colorist MadPencil, and Letterer Wes Abbot give us everything we have come to expect in a good Batman ’66 comic. The lines are clean and the colors strong and simple. Nightwing is shown jumping the canyon stark against the yellow sky. Sometimes Wonder Woman and Catwoman look very much like their live-action counterparts but not always. There is some variation in the faces from page to page, but it doesn’t get in the way of enjoying the book. They don’t attempt to make Bruce and Dick look like Adam West or Burt Ward, but that doesn’t detract from the book at all.

My Take: I was initially surprised that this book takes us from Bruce’s boyhood to his post-Batman career, but it makes sense. I like that they have started with Wonder Woman’s work against the Nazis, followed up with Batman and Robin in their prime, and finished with a retired Bruce. Bruce changes but the goddess Diana doesn’t. The progression feels authentic.

I also like the idea of having Commissioner Gordon and Chief O’Hara’s daughters taking over their Father’s roles in the 70s. It is a cute touch.

I like the Batman ’66 franchise in general and the Wonder Woman story in particular is very good. I highly recommend it for other fans of Batman ’66 or classic comics in general.