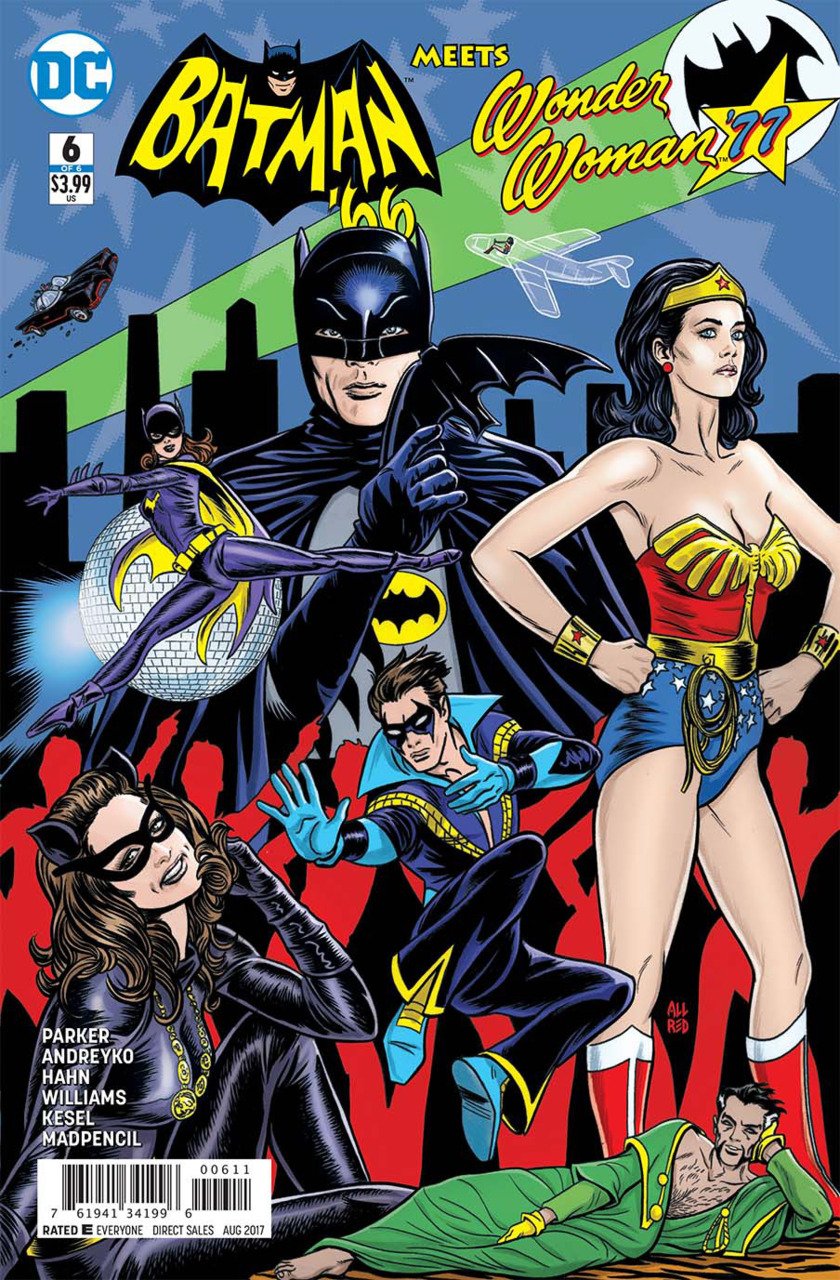 An aging Bruce Wayne is called back into action against his old foe Ra’s al Ghul in 1977 Gotham City. Can they keep Ra’s from using the Arkham Asylum Lazarus Pit? Find out in the final issue of Batman ’66 Meets Wonder Woman ’77.

The Plot (spoilers): Ra’s al Ghul has found his way into the Batcave where he faces off against an aging Bruce Wayne. He threatens to use Wayne Manor as the new home for the League of Shadows. Bruce remembers that Ra’s’ assassins can see in the dark so he puts on sunglasses and blasts them with bright light which blinds them enough for him to beat them up. They disappear into sand as they and Ra’s escape.

Meanwhile, Talia visits Catwoman’s disco and uses her ‘Warriors’ to attack the place. Disco Nightwing and Wonder Woman are there and Catwoman calls her leopard-shirt-clad bouncers to join the fight. The heroes overcome the assassins who disappear into sand as well. Talia also escapes.

Catwoman, Wonder Woman, and Disco Nightwing head to Arkham Asylum which has been taken over by the League of Shadows. They are joined by Batgirl on her motor bike and Batman in what looks to be a tripped out iRoc. The team go into the Asylum and descend into the secret basement. They find Riddler, Mr. Freeze, Clayface, Killer Croc and Cheetah blocking their way.

The team battle the baddies while Batman heads to the Lazarus Pit in search of Ra’s. Though Ra’s isn’t old and decrepit yet, he wants to use the restorative powers of the pit to bring him to full strength. The team defeats the assembled bad guys while Batman confronts Ra’s at a ledge over the pit. Ra’s tries to enter the Lazarus Pit but Batman jumps after him and grabs his foot. Batman is dangling from the edge of the pit with one hand and with the other holding Ra’s. He loses his grip on the ledge but Wonder Woman uses her lasso to save him. Ra’s loses the shoe Batman is holding on to and the Demon’s Head plunges into the pit.

This turns out to be a bad plan on Ra’s part though. Since he isn’t an elderly man the pit transforms him into a 10 year old boy. The heroes are able to apprehend the criminals and Talia and her youthful Father are gathered up into a police van and taken to prison. Batman and Wonder Woman discuss ways to defeat the League of Assassins and Wonder Woman suggests they form a League of their own.

Breakdown Dead Ahead: Writers Marc Andreyko and Jeff Parker finish up the Batman and Wonder Woman team up with a bang and a giggle. Having Ra’s al Ghul transform into a child is a hysterical way to end the story. It isn’t all laughs however, there is a wistful quality about what might have been between Talia and Bruce that is unexpected and bittersweet.

Pencils are by David Hahn, inks by Bill Williams, colors are by MadPencil, and Letters are by Wes Abbott. The style is simple and straightforward with bold lines and clearly executed action. The colors are also fairly basic, lots of violet/purple on one sequence, and then strong yellows in another. The art and color keeps things moving and the visual aspect of the storytelling never gets boring. The assassins have disco shirts exposing bare chests and highlighting their Demon’s Head necklaces. Good stuff.

My Take: I’m not sure in what level of detail the rules around Lazarus Pits are spelled out in canon, but I have to admit I laughed out loud when Ra’s was transformed into a kid. I could see how someone who takes their Demon’s Head very seriously would be put off by this narrative gag, but I thought it was a great touch. I also liked how it is Wonder Woman’s idea to form a ‘League’. Finally, there is a strong shout out to the movie The Warriors which I appreciated very much: “Warriors, come out and plaaaay”. Perfect.

We have one more special in the Batman ’66 line ahead, so we aren’t totally at the end of the franchise, but this feels like a sweet goodbye. In my opinion it is the best of the “Batman ’66 Meets” series. I can enthusiastically recommend this title to anyone who has the same connection to the old characters that I do.