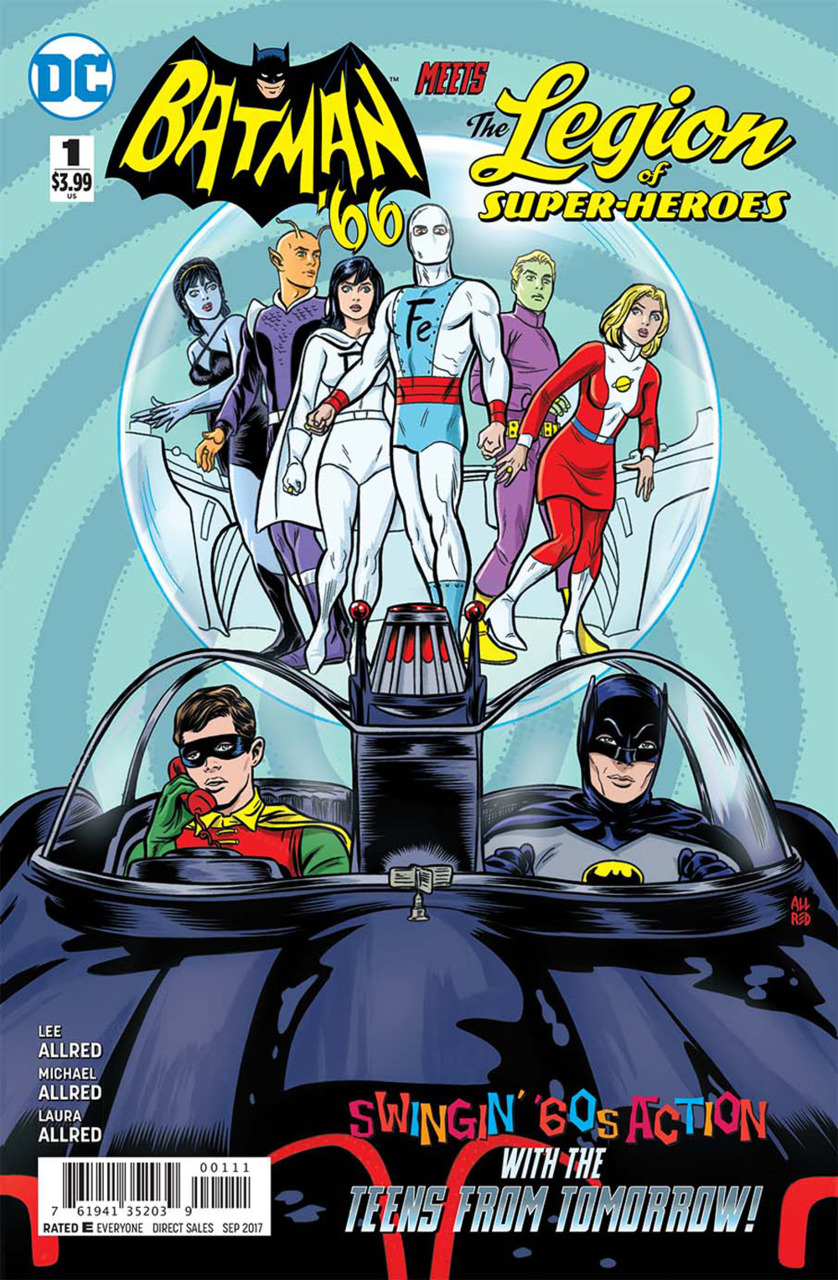 Synopsis (spoilers ahead): Six smartly dressed college aged youths ring the doorbell of Stately Wayne Manor looking for Dick Grayson. They hypnotize Alfred who shows them the Bat Pole entrance to the Batcave. They are confronted by the Dynamic Duo and say that they are the Legion of Super-Heroes from the year 2966 and are looking for the greatest teen superhero of all time – Robin! Their ranks consist of Brainiac 5, Phantom Girl, Saturn Girl, Ferro Lad, Chameleon Boy, and Shadow Lass. They need Robin’s help battling Universo the hypnotist who has escaped to the 20th Century.

Batman and Robin had been tracking Egghead to Griffin Park. Egghead has found the Legion’s Time Bubbles which allows them to travel through time. Egghead makes his way to 2966. Batman follows him to the future using a loaner Flight Ring and a spare time machine with Shadow Lass, Ferro Lad and Brainiac 5. Batman tells the League that Egghead will likely go to the Museum of Science so the crew makes their way there. They find Egghead who is able to elude them and escape back to 1966.

Back in the present day, well 1966, Saturn Girl is unsuccessfully training Robin on how to use the Flight Ring. Robin realizes that Universo will probably be at City Hall trying to hypnotize the Mayor. The League is surprised Robin has no super powers but find that he is right about the problems at City Hall. Universo has hypnotized all the Gotham leaders as well as the National Guard and the GCPD. The National Guard opens fire on our heroes who are protected by Chameleon Boy turning into a sheet of steel.

Chameleon Boy turns into a freaky flying creature and breaks Universo’s concentration which gives Robin and the Legion the chance to escape down a manhole.

Egghead appears in 1966 in Commissioner Gordon’s office and finds the room already occupied by Universo. The two are nearly identical looking and determine that Egghead is Universo’s ancestor. The pair decide to team up.

Saturn Girl has used her mind powers to collect everyone in Gotham that hasn’t been affected by Universo’s hypnotism. There is a collection of bad guys: Bookworm, Solomon Grundy, Shame, The Mad Hatter among others. Saturn Girl’s powers compel the bad guys to attack those under Universo’s control.

Egghead and Universo see the attack and Universo takes control of the baddies. Robin and the Legion are being assaulted by their own forces but Batman and the rest of the Legion arrive in the nick of time. As Universo gathers his power for a final beam of hypnotic power, Phantom Girl, who turns out to be Princess Projectra in disguise, creates a mirror which turns his hypno beam back onto himself.

The Caped Crusaders use this distraction to beat up Egghead and Universo. The hypnotic power is ended and the citizens of Gotham return to normal. The Legion returns to their own time along with the captive Universo.

Thoughts: The Batman ’66 franchise has come to an end with this final installment by writers and artist Lee Allred and Michael Allred. Colors are by Laura Allred and letters are by Wes Abbot.

Those who are familiar with the Legion of Super-Heroes will likely find a number of in-jokes and delightful Easter eggs to make this story an engaging tale. I am not among those who are familiar with the Legion so, while I recognize the jokes are there, they aren’t for me. The story itself is pretty straightforward though the team inexplicably splits up and then comes back together in a round trip that seemed unnecessary.

It isn’t clear why the Legion have enough information to believe Robin is a great hero but not enough to know he doesn’t have super powers. Braniac seems to have a fetish for solving problems using a computer, though that fact is used as a throwaway gag. There are several references to the history of the League that I personally didn’t get, but that didn’t detract from the likable nature of a Batman ’66 book.

There are some curious decisions taken on a few pages. There is a kind of board game that covers two spreads. Different spaces on the board contain references to different portions of The Batman Universe, many are cute and clever, others are obscure references, and others are just silly gags. There may be more to the jokes than I understand, but it seemed an odd choice.

The art is just what Batman ’66 fans have come to expect, clear colorful action, abstract backgrounds, faces that evoke the 60’s actors. This franchise is always easy on the eyes and lightweight enough to be a pleasure to pass the time.

My Take: My enjoyment of this book was lessened by the fact that I am not familiar with the Legion. There are reference to a rich history so if you are a fan of this team I expect there will be a lot for you to enjoy. I don’t like having to give this final issue of Batman ’66 a lower grade than usual, but it is honest. I don’t want to dissuade Legion fans from trying this title because it might be the bees knees for you. I was entertained but overall not as impressed.