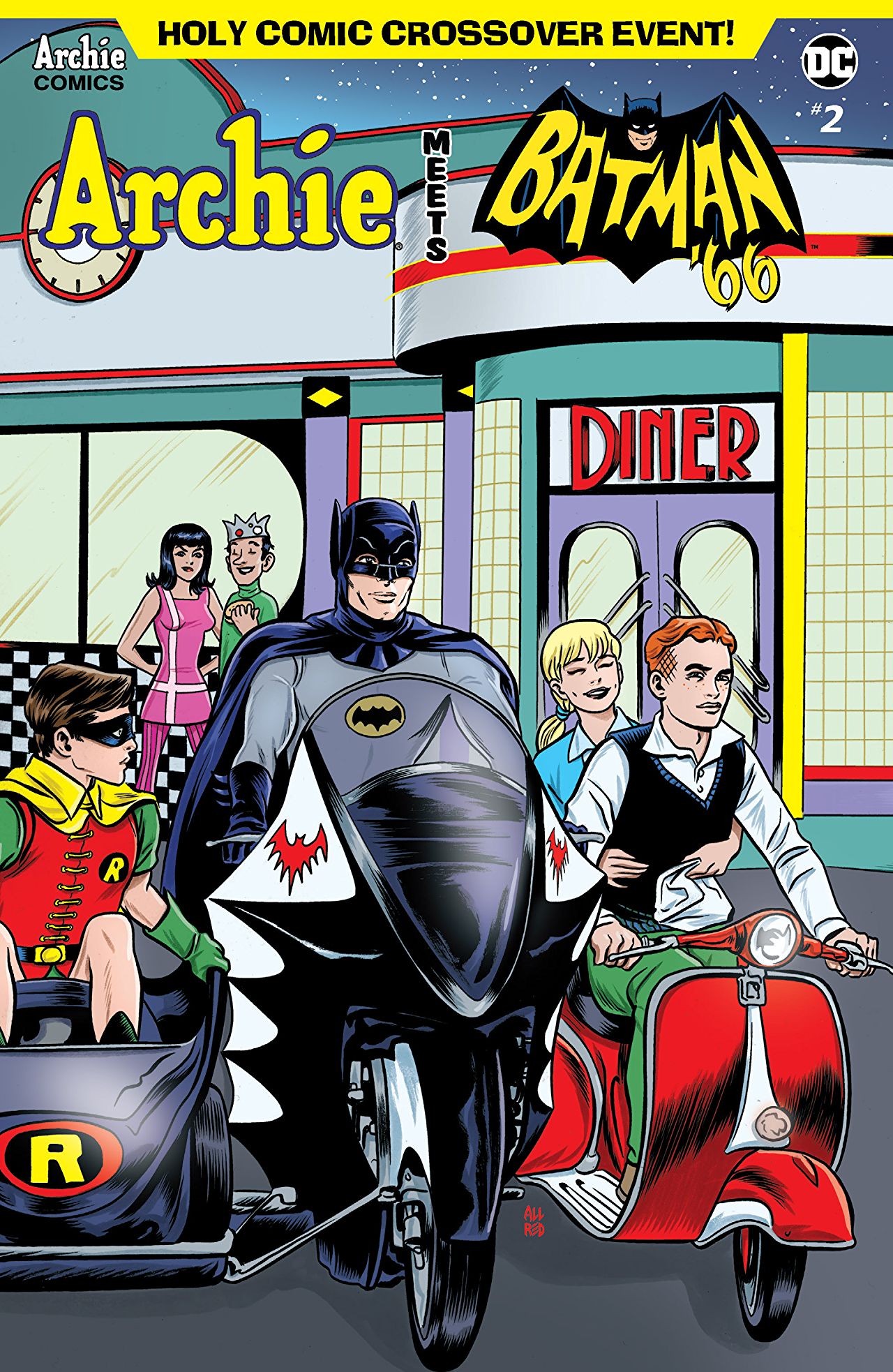 Overview: Robin and Batgirl go undercover to Riverdale High while the Bat-villains escalate their plans, bringing in a new ally in their quest to take over the town.

Synopsis (spoilers ahead):  When last we left our heroes, Veronica managed to reach out to Batman, Robin, and Batgirl to fill them in on the adults in Riverdale suddenly acting very strangely. Batgirl and Robin are ready to spring immediately into action while Batman wants them to wait until they have more information. With Bookworm still on the loose, there are too many unanswered questions for Batman. The Caped Crusader decides to divide efforts, with him and Alfred handling the investigation of Bookworm and Batgirl and Robin going undercover as brand new students at Riverdale High.

We travel to Pop’s where an impromptu dance party is being held to celebrate the end of the school day. Jughead is acting as the DJ and has a very familiar song playing that all Archie fans will immediately recognize as Candy Girl. He’s interrupted by Pop who breaks his record and kicks the kids out of the diner, saying he wants a new type of clientele and he’s going to get that by serving Joker burgers. As the kids are booted outside they see Mr. Weatherbee pass by who is acting downright pleasant toward Archie and his friends. Something is clearly going on with more and more adults acting out of character. Cheryl Blossom asks Archie for a ride home but Betty mentions Archie hasn’t driven all week as he’s waiting on a new carburetor for his car.

Archie decides to find Veronica to apologize to her for not believing her original story about the adults, but he’s left alone in this task as Jughead runs off to find food since he wasn’t able to get anything from Pop’s. Driving by him are Riddler, Siren, and an unknown second woman. They’re talking about using mechanical relays to amplify Siren’s voice so she doesn’t even need to be present to gain control over the adults in Riverdale, including women as well. Riddler bemoans the fact that there are no criminals in the town, just an overabundance of teenagers.

The car slows down as they watch a mailman come up to Archie with a package. Excited that it’s his carburetor, Archie opens the package to instead get a pie in the face as the mailman reveals himself to be Reggie Mantle, who couldn’t pass up an opportunity to prank Archie. As Reggie walks away, the Siren tries to use her song to put him under her spell. It doesn’t work on teenagers, but the Riddler has another idea. He offers Reggie cash which the teen eagerly takes and asks what Riddler wants him to do.

We cut to Bruce Wayne and Alfred visiting Labyrinth, a bookstore frequented by the Bookworm. A woman passes them by as the cashier realizes he was just given fake money as it falls apart in his hands. Bruce and Alfred chase after the woman who heads outside and gets on a motorbike to drive away. Bruce tells Alfred to follow her in his car while he suits up as Batman and chases after her in the Batmobile.

Back at Riverdale High, Archie is talking to Betty during class, telling her he believes that Veronica is right and something is happening to the adults in the town. Betty refuses to hear him out and Miss Grundy stops class to yell at him for talking. Archie changes tactics and tries to get Jughead to listen to him. Jughead is barely awake and Archie gets in trouble again, just as two new students arrive in the classroom. Grundy introduces the class to Dick Grayson and Barbara Gordon who Betty and Archie immediately fall in love at first sight with. The entire scene is being watched, thanks to a see-through blackboard, by Catwoman, Riddler, Joker, Siren, and Penguin. Siren mentions her song doesn’t work on teenagers while Catwoman decides to go undercover as a new teacher at the school, Miss Kitka.

The Joker comes up with a plan, to use one of the teens as a test subject for Siren, someone nobody will miss, to ensure they can take over the entire town. That teen is Jughead.

Analysis: The second issue of a miniseries has one main purpose, to escalate the conflict and get the reader hooked enough to follow through until the end of the story. In this regard, Archie Meets Batman ’66 #2 is a success. The plans of the villains to take over the town expands with more adults falling under their control as well as the end goal of also getting the teenagers under the same spell. We still don’t know exactly “why” the villains want to take over aside for just the evil of it, so I hope we do eventually learn in the next issue of their end goal. Riverdale is a rather milquetoast little town which makes it easy pickings for villains, something that was really never explored in Archie comics. It’s hard to divorce the comic from the show currently airing in which Riverdale is a town full of secrets and darkness, and part of me wishes that was the town Batman’s villains chose to take over. Now that would lead to some interesting stories.

The issue moves along at a rather fast clip with scenes not overstaying their welcome and everyone acting in character. Writers Jeff Parker and Michael Moreci have a real handle on the voices of these characters and it was a stroke of genius to team up Reggie with the bad guys. I can completely buy into Reggie deciding to become a supervillain if even just to mess with Archie. On the Batman side of things, I like that Batgirl is written to be impulsive while Dick is more level-headed. The two play off each other very well in what little screen time they’re given and I’m eager to see Dick and Babs mingle with Archie and his gang. That leads me to another issue with the story. While the villains and the Archie characters are given a bunch of screen time, the Bat-Family feels like they’re a bit extraneous to the main plot. Batman especially just has a brief subplot of hunting down Bookworm, and in a miniseries, that sort of subplot just takes away from the main action. I hope Bookworm’s plans dovetail into the main story soon otherwise the title should be changed to Archie Meets Batgirl and Robin ’66.

It’s no secret that I’m a huge fan of Dan Parent’s art on the various Archie books which hearkens back to the classic stories while also being modern enough to keep the reader’s attention. Jughead gets a special mention in this story as he’s drawn in several over-exaggerated poses from his time as a DJ to sleeping in class, to running away to find food, all in a classic Jughead manner. The rest of the characters continue to be immediately identifiable and subtle details like the Joker’s mustache, make the art the absolute highlight of the book. I wouldn’t mind seeing Parent try his hand at other heroes and villains in the Archie style. I hope we at least get some more Bat-villain cameos in the upcoming issues.

Overall this second issue served to push the story forward though I hope future issues spend more time with Batman who is currently playing second fiddle to the main plotline. The dialogue remains snappy and fun and the art is a major highlight. The plot could go either way but as of now, I’m eager for issue #3.

Final Thoughts: Some stumbles with the handling of Batman and the overarching storyline makes this issue a bit weaker than the first. The panel to panel keeps you engaged, however, and I hope issue #3 makes some minor course corrections to elevate this series beyond campy fun.