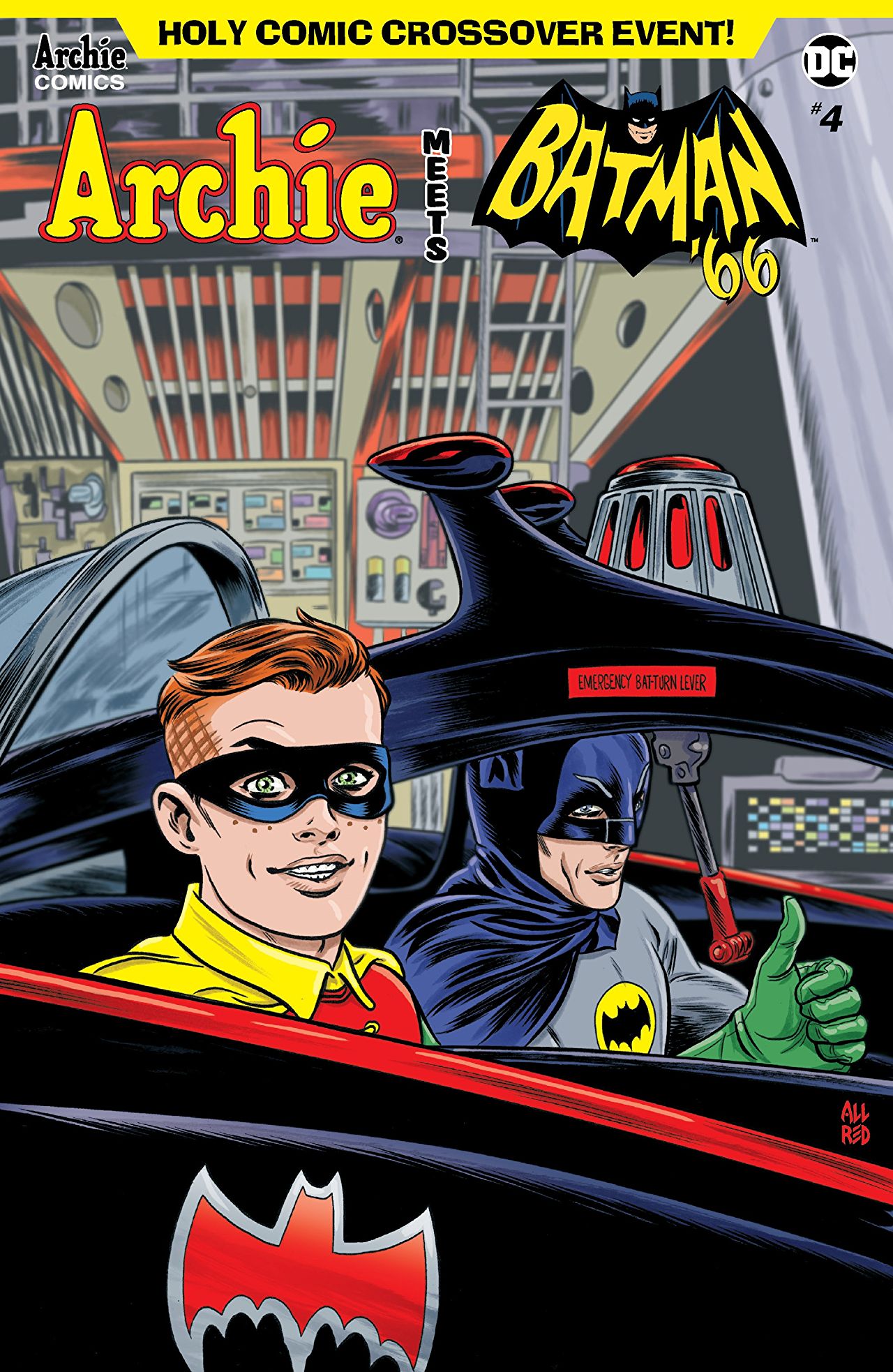 Overview: Batgirl and Robin fall afoul of Catwoman and Joker, while Bruce Wayne discovers dastardly deeds at a society party.

Synopsis (spoilers ahead): Batman phones Alfred from the Batmobile, catching his loyal butler up on his villain’s plans to take over the town of Riverdale. Meanwhile, Joker tempts Jughead with a stack of hamburgers and attempts to mold the slacker youth to his evil, insane will, but Jughead’s apathy defeats him. He leaves Jughead tied to a chair, forcing him to watch films he believes will complete the process he failed to start.

At Riverdale High, Dick and Babs, still undercover as students, marvel at their classmates’ infatuation with the new teacher, who they recognize as Catwoman. As the false teacher proceeds with her seduction of the young males under her charge, Batgirl and Robin burst into the gym, taking on Catwoman’s army of goons. However, they are overwhelmed, and though Archie and his friends break free of Catwoman’s influence to try to help their heroes, Catwoman knocks all of the teens and heroes out with sleeping gas. Batgirl and Robin awaken in Joker’s brainwashing chamber, tied to chairs next to Jughead, who reveals the villains’ plan to take over the town at the upcoming party.

Bruce, wearing a sharp tuxedo, meets Veronica’s dad at the country club party in question, and realizes that the villain Siren, providing music for the party, will control the richest citizens of Riverdale. He puts in his radio bat-earphones, but just as Bruce meets Archie and his friends, the villains reveal themselves and take over all the key positions in town through Siren’s power. Just as the full horror of the situation hits our protagonists, an upside down Jughead hat is projected into the sky reminding Bruce of a certain signal.

Analysis: Longtime Batman ’66 writer Jeff Parker and frequent fill-in writer Michael Moreci provide a much more plot-heavy script this issue. However, all this narrative drive comes at the expense of any meaningful contribution by the Riverdale characters – Archie and his friends valiantly try to assist Batgirl, Robin, and Bruce, but none of their efforts amount to anything.

Dan Parent’s pencils provide appealing work, matching the style of both Batman ’66 from Michael and Laura Allred (who provide one of the many covers) and the classic Archie look, but sometimes at a cost. Jughead’s resistance to Joker seems greater than the script indicates because of Parent’s drawing of his expression. In the desire to stay “on model,” some of the drama is lost – or perhaps, some potential for comedy is lost as Jughead uncharacteristically becomes despondent in the face of Joker’s brainwashing monkey cymbal film.

There’s a sense that this miniseries is perhaps an issue too long, as several scenes seem to stretch without really providing significant character moments. Perhaps a contraction of the length could have brought more balance to the crossover, which emphasized the Riverdale cast much more heavily in the first few issues. On the other hand, it could overemphasize the Batman cast even more, as they provide all of the impetus of the forward momentum. One cannot prove a counterfactual, after all. All in all, a completely inoffensive installment, but a bit less compelling than the previous issues.

Final Thoughts: This pleasant issue pushes the plot forward, but sidelines half of the crossover in the process.