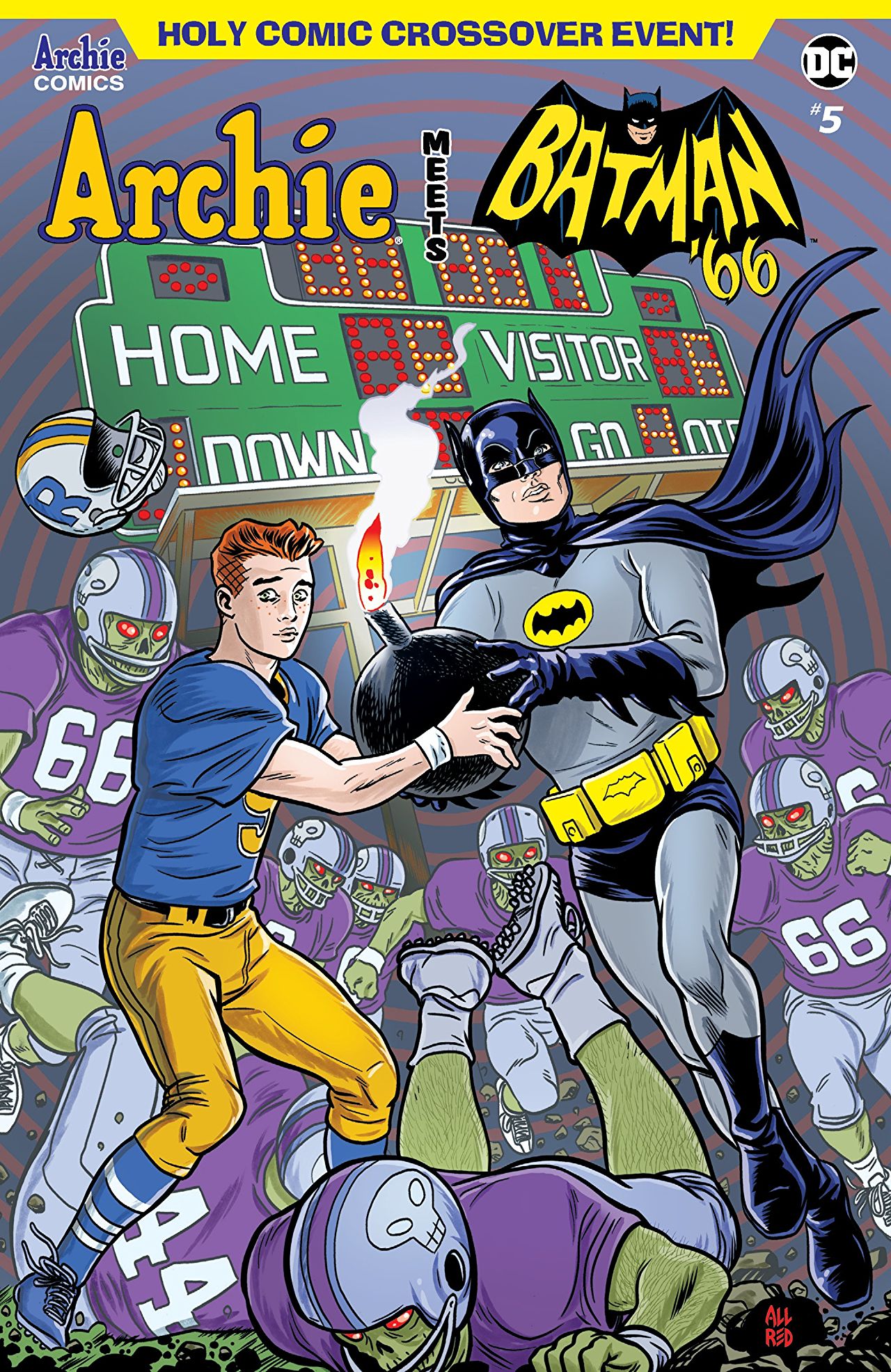 Overview: Though Batman and Archie’s gang rescue their friends, all does not look rosy for our heroes!

Synopsis (spoilers ahead): As a makeshift Bat-signal lights up the Riverdale sky, Archie, Betty, and Veronica spring into action against Penguin, Joker, Catwoman, Riddler, and the other Gotham villains. They try to snap their new friend Bruce Wayne out of the villains’ mind control, but he says he can’t help, and to meet his friend by the hedges outside. Sneaking behind tables, the gang deduce that Batgirl, Robin, and Jughead are being held in Veronica’s dad’s warehouse by the lake. Outside, they are surprised by Batman. Veronica volunteers to navigate, while the others follow in Reg’s car.

In the warehouse, Robin, Batgirl, and Jughead barely hang on to sanity in the face of the clashing cymbals of the monkey robot. Batman and the teens break in just in time. Batgirl and Robin explain that Jughead accidentally lost his hat onto a massive spotlight, and Batgirl managed to knock the controls to signal Batman. Archie saves Jughead’s mind with a huge plate of hamburgers, as usual.

Reg alerts the team to the miniature model of the villain’s “New Riverdale,” a monument to their colossal egos. They also notice plans to broadcast their mind control signal all over America and find out that the fiends have kidnapped Dilton to improve their evil technology. Too late, they realize that the villains have descended upon the warehouse, capturing the Batmobile and bringing an army of mind-controlled adults with them.

Driven back to the lake, Batman sacrifices himself to hold off the mob and let his young sidekicks and new friends escape in the Batboat. They flee, promising the captured Batman they will be back to rescue him, as the villains cackle in glee.

Analysis: Jeff Parker and Michael Moreci write a solid, though hardly earth-shattering penultimate issue for this mashup series. Though hardly the expertly spun blend of angst and fantastical that Nick Spencer recently produced for Archie #700, it captures the familiar gags that fans of Archie and Batman ’66 expect, while Dan Parent, J. Bone, and Kelly Fitzpatrick conjure the appealing, primary-colored world of these two properties.

The title of the issue, “To Fight Another Day,” runs throughout the issue, as the team first runs from the party where all the adults are mind controlled, then again as Batman gives his own freedom to let his friends escape. It’s rather a shame that heights of delight and depths of despair aren’t hit here – the device of the monkey cymbal just doesn’t hit home as a plausible destroyer of sanity in Batgirl, Robin, and Jughead, and the hoary device of hamburgers as a restorative doesn’t aim for more than a chuckle. The early issues of this series promised a bit more in terms of creativity, and this issue and the last have merely treaded water instead of following the possibilities of the mashup to their full realization.

Final Thoughts: As the story builds to its conclusion, Archie and the teens of Riverdale are inspired by Batman to fight the evil encroaching on their town.