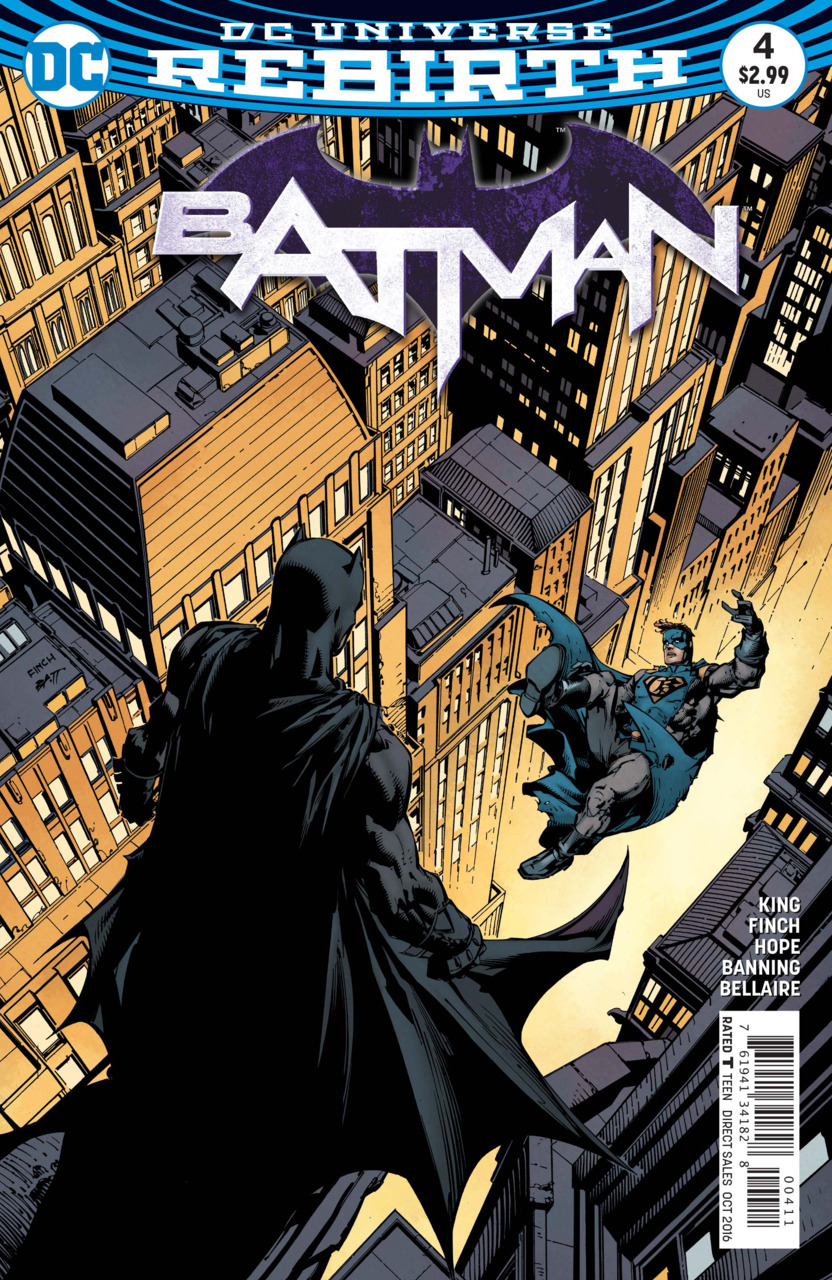 We last left our newest superhero duo, the Gothams, in the clutches of Professor Hugo Strange, all-around bad guy, and his assistant Psycho Pirate, manipulator of emotions.  By the time Batman makes it to the scene, the action has past.  The strike team is down, having been decimated by an unknown force, Gotham is gone, and Gotham Girl seems to have been emotionally broken.  Meanwhile, Gotham is on a rooftop talking down a jumper.  Well, attempting to.  He explains that nothing is ever too bad to fix.  There’s always something that can be done.  The optimistic approach fails, however.  After warning of the coming of the Monster Men, he detonates the explosives he had hidden on his person.  Gotham is unhurt, but the same cannot be said about the strike team that was strangely accompanying him.

Back in the Batcave, Gotham Girl regains consciousness.  There is a sweet scene between her and Duke Thomas where she repeats that she is scared and he admits his own fears:  he is very close to a somewhat unhinged meta-human.  Their moment doesn’t last long as Batman breaks in over comms and asks for an analysis of the crime scene where they found Gotham Girl and the annihilated strike team.  As Duke works on analyzing the information, Batman confronts Gotham on a bridge where he is attempting to repair it.  Much like Gotham Girl, he is repeating the same phrase.  His being “I can fix it.”  Batman quickly steps in to say that all he can do without the proper training is make things worse.  Naturally, this upsets Gotham who strikes at Batman by hurling an I-beam which Batman deftly avoids.  It does, however, destroy the Batmobile.  Batman acknowledges he may have been wrong in his thoughts of what Gotham was capable of.  With all of his abilities, Batman though Gotham could save the city in a way he never could.  Until he found the bodies, at least.  Confronted with the deaths of twenty-seven men, Gotham panics and flees.  There were twenty-eight men.

As Batman procures a jet pack from the ruins of the Batmobile, Duke fills him in on his findings.  The numbers of the men’s dog tags each add up to the number twenty-four, and the twenty-fourth letter of the alphabet is, of course, X.  Batman immediately puts it together that Amanda Waller and her Task Force X are up to something in his city.  It’s deduction worthy of Adam West.  He heads to confront her, detonating the wreckage of the Batmobile.  Below ground General Lane opines that they don’t need to worry about Batman connecting any of the events with their actions, and that even if he did, he’d never be able to breach their headquarters, let alone get through the staff.  Waller cooly replies that Batman is standing behind him.  The confrontation is simple.  Waller believes that Batman does more harm than good.  Since his arrival Gotham has been subjected to event after event, all stemming from costumed villains.  The city is on fire and she plans on putting it out.  Psycho Pirate and his handler Strange were to work on fundamentally changing the people of Gotham, but, of course, they betrayed her and forced the Gothams into madness.

Batman and Waller agree to work together to right the situation.  She will assist him in locating Psycho Pirate so they can get the Gothams’ heads back on right.  Again, Batman mentions the twenty-seven dead men, for Waller to react that there were twenty-eight sent.  The wheels turn in Batman’s mind.  We cut to the home of the Gotham’s parents.  They are dead and Gotham is ready to finish the twenty-eighth man, who killed them.  Batman surmises that after the initial chaos, Gotham took of the mask, and one soldier still alive was able to identify him, striking out at his parents in an act of revenge.  Batman is now the one talking someone down off the ledge, pleading with Gotham to realize he’s acting out of character, that Psycho Pirates’ manipulations have taken a hold of him.  Batman urges that he can fix him.  Gotham, however, has succumbed to defeat.  He knows nothing can be fixed, that everything has gone too far.  He snaps the soldier’s neck in retaliation.  The two vigilantes scuffle.  Gotham revels in his new direction.  The city destroys, no matter how much you give it or sacrifice.  It is beyond fixing.  Even as a crisis is ending, something else is always coming along.  The only option now is to burn it to the ground and start over.  With that, Gotham heads out to begin his new crusade.

This story got real dark, real fast.  It’s a testament to King’s writing prowess that a story can take such a drastic turn but still feel organic.  The setup from previous issues is paying off and the pace is quickening.  If my math is right, we have just two issues to wrap up the Gothams’ story before The Night of the Monster Men takes over the Bat-Family books this Fall.  The overall narrative is taking shape and I really like where King is taking our hero.  It’s nice to see a slightly more emotional Batman.  His steely veneer obviously is wavering when it comes to his relationship with Gotham.  He is trying to do things a different way and the city is fighting back.  Will his new outlook survive Psycho Pirate and Hugo Strange?  Finch’s art continues to impress, but the camera angles seem to be a bit generic in this installment.  Could the art pacing be the result of the rushed schedule?  Time will tell, I suppose.  Regardless, it was a great issue.  I wasn’t a huge fan of Snyder’s work the past few years, so it’s nice to have a Batman solo book to look forward to every other week.