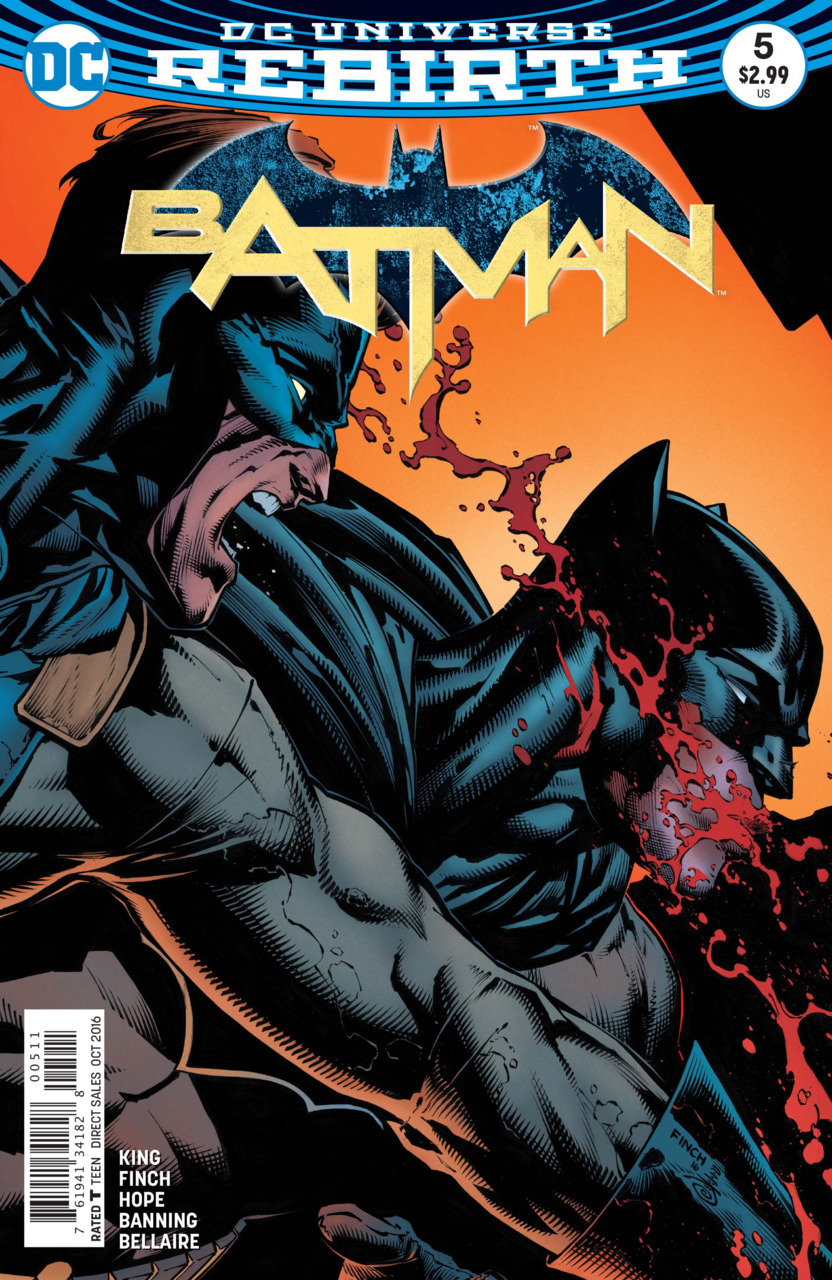 When last we left Batman and his newfound friend-turned-enemy, Gotham, the latter was headed to destroy the root of the evil of Gotham City – the city itself.  While our hero does have several tricks up his sleeve, he still isn’t fast enough to quickly follow an enhanced human.  This means, of course, Alfred to the rescue.  Batman calls Alfred off of observation duty to do what he can in the meantime.  What follows, is difficult to describe, but I’ll do my best.  Alfred dons an ill-fitting cape and cowl, heading in another Batmobile to Gotham’s current location.  All the while he plays a very tongue in cheek conversation between himself and the late Thomas Wayne, explaining the absurdity in thinking that raising young Bruce would be anything less than a walk in the park.  The Batmobile gains speed as Alfred sets his sights on his target, mowing him down at 200 miles per hour.  Smash cut to the title page, and Alfred emerges from the wreckage to face Gotham.

Bat-Alfred stands face to face with Gotham, who is dramatically thrown off by the situation, denying that the man before him is the real Batman.  He’s just a man in a mask.  As quickly as Alfred’s vigilante career begins, it ends with the arrival of the true Batman.  Alfred takes his exit, stage right, and the man himself crashes into the immediate brawl, following up a dropkick with his batarangs.  The swarm of attacks, not to mention his addled state of mind, has Gotham on the ropes, ruminating again on what a man in a mask is.  The fight has brought Gotham to the Batmobile in which Alfred arrived on the scene.  While still appealing to Gotham, Batman pulls a device and detonates the car.

In the Batcave, Duke Thomas and Gotham Girl watch the proceedings, commenting on the number of vehicles the team goes through.  Gotham Girl is still heavily under her own curse from Psycho Pirate, fear of everything.  While Gotham himself is stunned, Batman appeals to him.  He was hit hard.  He was hurt.  That doesn’t give him free reign to hurt, though.  Gotham is incredulous towards the threats that Batman can put him down.  He is then faced with a Batplane careening down onto him.  As Gotham pulls himself out of the wreckage, Batman contacts Alfred and tells him to make the call.  There is hesitation.  The call has never been made within the city before.

Gotham Girl has seen the destruction in the battle from the Batcave monitors.  She lashes out, frightening Duke.  She’s scared and she sees the heel turn her brother has taken.  She’s scared to be alone.  They watch the confrontation reach its crescendo.  Gotham tells Batman he can’t save the city.  Batman knows.  They say their goodbyes to one another.  Then, chaos.  Gotham is struck from off panel, lashing out with his heat vision towards Batman.  The strike, however, is blocked by a suddenly present green shield.  The call was made.  The Justice League has arrived, and Superman politely asks Gotham to stand down.  He does not comply.

Ever the detective, Batman has noticed Gotham’s power levels fluctuate based on the threat at hand.  He sees an opportunity to exploit this.  He entrusts Duke with getting Gotham Girl to reveal the nature of their powers.  The sooner, the better, as the battle between the Justice League and Gotham rages.  Duke commiserates with Gotham Girl, as both are in tough situations and are scared.  Gotham Girl readily gives up the details on their abilities.  They were purchased, and they came with a heavy price.  Each moment using the abilities shortens the lifespan, and the more intense the powers, the more time is taken.  They could be Supermen for years, or gods for hours.  They planned a two year crusade to save the city before succumbing to the cost of their powers.  As they watch Gotham lay waste to the Justice League, she knows Gotham has chosen the latter.  There is no way Batman, a man in a mask, can face him.

Batman is the last hero standing.  Diplomacy didn’t work.  Force didn’t work.  His last ditch effort is brutal honesty.  The city isn’t evil.  It is people and the decisions they make.  Gotham can’t blame the city for what happened.  Batman draws the blame towards himself, as his decisions and advice have led to the pain.  His weakness and inability to protect the city causes the horror.  “I am Gotham.  Kill me.”  The dichotomy Gotham Girl is presented with does not sit well with her.  This isn’t the Batman she and her brother grew up idolizing.  Through her fear she remembers.  You can always be brave.  Gotham has taken the bait and knows what he needs to do.  As he prepares to kill Batman, Gotham Girl swoops down and carries the addled man away.  They briefly, violently, fight before crashing back to earth.  Gotham has spent all of his powers and has passed.  All the while, Gotham Girl narrates, seemingly from the future, revealing bits of information.  She and Duke Thomas marry.  They often return to the site of Gotham’s demise, as that moment kicked off so much to come.  Oh, and she kills Batman at some point?

This is how you end a story, folks.  The knot is untied.  We have just enough answers and closure to feel good about everything, and enough is still floating out there in the ether that we’re hooked for what’s to come.  Some stuff does seem to have dropped off the face of the story completely, mainly Amanda Waller, General Lane, and the villain combo of Hugo Strange and Psycho Pirate.  Maybe there’s more of them to come in the upcoming Monster Men story.  Maybe there’s not.  They served their purpose for this story, so I’m really fine with them fading into the background to lick their respective wounds.  King has wasted no time in putting Batman through the wringer, which I whole heartedly approve of.  The storyline of the Batman books in Rebirth so far, especially this core title and Detective Comics, has centered on Batman bringing people into the fold instead of keeping them on the outside, the new approach.  To have him do this with a new character like Gotham and see how sideways everything goes and how quickly really makes me empathize.  The theme of bravery is an obvious one in regards to Batman, but it works.  His brutal honesty may have been to draw Gotham’s ire away from the city, but how much of it does Batman honestly believe?  I’m guessing quite a bit.

The art is more of the same.  Finch is probably the best he’s been in a long time, and Jordie’s colors are on point.  The roughness of the issue is fully on display, bringing a touch of Capullo’s much lauded style to the pages.  The Gotham presented here at the end is easily distinguished from the Gotham from the beginning of the story back in June.  His visual arc has been as interesting as his character arc, and in comics, isn’t that what we’re looking for?