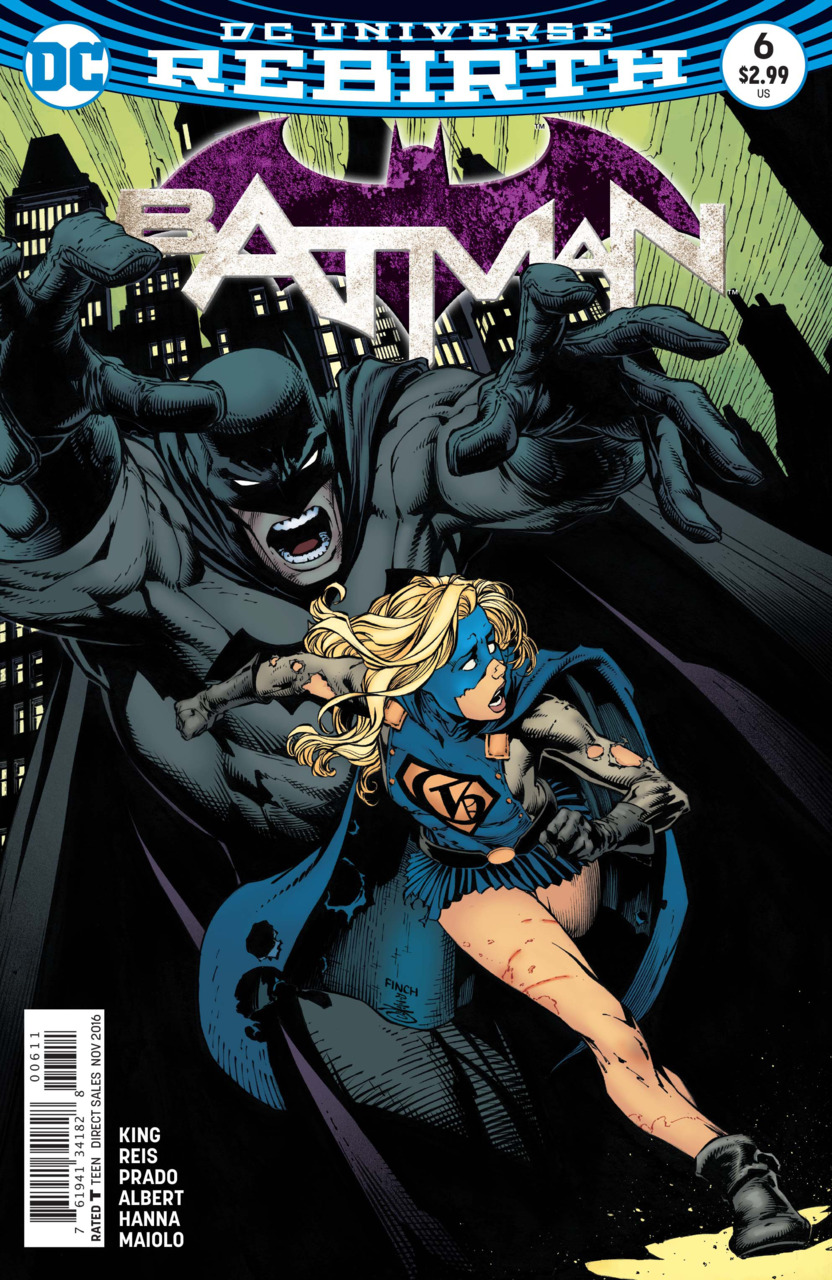 Now that Tom King’s first arc of Batman is in the books, we get the first Tom King epilogue story.  Epilogues are a tricky beast to manage, but more on that later.  We pick up shortly after the death of Hank/Gotham, and we get a character-centric story on how Claire/Gotham Girl is dealing with her depression.  She has continued talking to Hank as if he was still there, telling him about her day as she goes through the day-to-day minutia of life.  Getting dressed, fighting crime, giving yourself a buzzcut, watching reruns of old sitcoms, etc.  We’ll mark that buzzcut thing as a red flag for later.  Tom King comes up with a deep cut from Batman’s rogues gallery and pulls Colonel Blimp out of the 1980’s.  He’s stolen a submarine and is demanding payment, again.  Gotham Girl makes short work of him, while continuing to talk to Hank, discussing their mother this time.  The police look on in silence as she deposits the villain, and Batman looks on from the shadows with concern.  In Gotham Girl’s dialogue, we get a glimpse at the root of the problem.  Who will remember any of this?

Duke Thomas and Batman discuss the state of affairs.  They know things are wrong, the combination of the death of her family and the lasting effects of Psycho Pirate’s influences are dangerous.  But the question is what to do to help.  She’s killing herself slowly by continuing to use her powers at a frantic pace.  They have to somehow save her from herself.  As she and Hank’s memory look over the Gotham night sky from above the city, she hears the sounds of distress.  She has a moment where she debates whether to continue reminiscing with Hank or help.  Hank’s memory encourages her to do the right thing.  She comes to see Captain Stingaree (an even deeper cut, this time from the 1970’s) making his brothers walk the plank.  He assumes they are all Batman.  The man is not well.  Gotham Girl saves the hostage brothers, remarks that Hank loved pirates as a child, and is confronted by Batman, who was watching.  They need to talk.  She exclaims that meeting Batman is amazing.  Like they’ve never met.  And we begin to see how deeply rooted her problems have become.

While dealing with villains and the deranged is something Batman is intimately aware of how to deal with, helping someone like this is beyond him.  He asks Alfred how he helped his younger self after the death of his parents.  Alfred remarks that Batman nightly leaves a perfectly good home to dress as a bat and jump off buildings.  He may not have been of much help.  The next night there is another vignette of a crime in progress to be stopped by Gotham Girl, and another deep cut.  From 1960’s this time, as Kite Man is doing a smash and grab at an upscale apartment.  Gotham Girl handles the situation and drops Kite Man off with the authorities.  Her conversation with Hank is beginning to get confusing and reality is pushing its way in.  Batman trips the bat-signal.  This conversation is happening.  Now.

He takes a different approach.  He’s not there to help her.  She needs to help him, like she’s helping the city.  He needs to know why.  She doesn’t drop the Hank conversation, but she begins to engage Batman.  Hank was the only one who understood.  Maybe Batman would?  Loneliness seems to be something with which he’s familiar.  Helping the city makes the pain hurt less, so there isn’t a choice as to what to do.  Batman drops the cowl and talks.  He explains the deaths of his own parents, how his state of mind was immediately after.  He talked to his own mother after her passing as Claire is now talking to Hank.  She breaks down and admits she misses Hank.

The next day Batman meets with Amanda Waller.  She has news on the location of Psycho Pirate, who Batman needs to help Claire.  Part of Strange’s plan was to gain control of Psycho Pirate from Waller and Lane in order to trade him to someone for a significant quantity of Venom.  Bane has Psycho Pirate in Santa Prisca.  Batman is going after him against great odds.  Waller remarks that it’s suicide.

Epilogues.  On one hand, they’re nice.  They wrap up a story after the action, let you know how the characters are coping with everything.  The other hand, though?  Momentum-killers.   You never know what you’re going to get.  This is a nice story.  It’s quaint.  There are a few decent beats, but for the most part it came across as filler.  The “I Am Gotham” arc was good, but I don’t feel like it was deserving of its own epilogue.  It didn’t earn it.  So, sadly, this is an instance where the epilogue is a momentum killer.  If Gotham Girl is going to stick around as part of Batman’s supporting cast, I’d much rather have the fallout from her brother’s death tie into her arc in the upcoming “Night of the Monsters” or “I am Suicide” arcs.  It would bring an additional sense of cohesion to the ongoing narrative in King’s overall plan.  Maybe it will be there.  There are still a lot of questions to be answered as to how King will be running things.  I’m still excited for what’s to come.