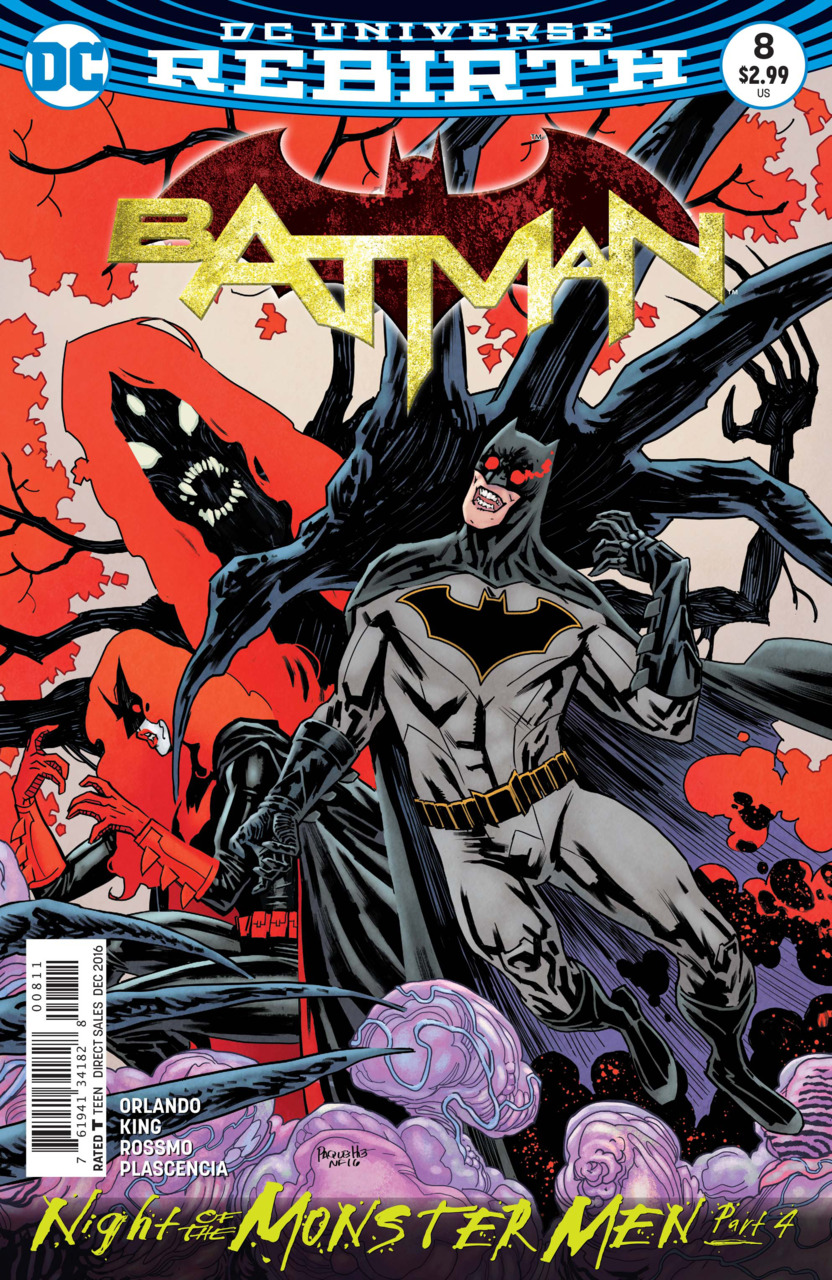 The Night of the Monster Men continues.  Team Batman has been steadily losing ground, and members, to Strange’s monsters.  Before focusing on the larger abominations, Batman and Batwoman decide to deal with the mutated Nightwing and Gotham Girl who have freshly arrived on the scene.  Batwoman advises against Batman assisting with his teammates as he is too close to them.  She will handle it while Batman works on the larger issue at hand.  In true Batman fashion he has a plan and some quick thinking results in the multi-headed creature’s electrocution and temporary downing.

Back in the caves where the Gothamites have evacuated to avoid the combination of the hurricane and the monsters, things are getting hairy.  The mold from the caves is, naturally, driving people crazy and bringing out their anger.  Spoiler and Orphan have their hands full, to say the least.  They eventually come out on top when they realize the combined heat from multiple simultaneously activated emergency flares will deal enough damage to separate it from its captive hosts.  After its ejection, the slime mold makes its way out of the cave, where it seemingly becomes part of the biggest monster we’ve seen yet.

After dispatching his monster, Batman heads to back up Batwoman while Alfred and Duke work on something to counteract the solution that mutated their friends.  While Batwoman is dealing with Nightwing, Batman faces Gotham Girl.  He vows to save her, to do what he couldn’t with Red Robin or her brother, Gotham.  Citizens surround him as he makes his promise, only for it to be revealed that they are Clayface drones.  Karlo reforms himself, this time around Batman as a heavy duty suit, hopefully able to withstand a fight with the mutated Gotham Girl.  They fight to give Duke Thomas time to get to the scene with an antidote.  The suit eventually fails when Gotham Girl delivers a Hulk-style thunderclap which separates him from Batman.  They accomplished what they needed to, though, as Duke drops in and administers the antidote.  The antidote is a success and Gotham Girl is back to her normal self, however the injection device is broken in the process.  Nightwing is still in his monster state and the issue closes with him, airborne, dropping Batwoman, who has a plan.

After this week’s releases, we’re five installments into this mini-event.  This definitely felt like a drawn out filler issue for lack of a better term.  There is plenty of action, but little to no overall advancement in the story.  This is really where the double shipping is a benefit, as it doesn’t bother me quite as much knowing the finale is only a week away instead of a month away, or more.  I can live with some decent filler if I know what I’m waiting for is just around the corner.  Orlando continues to juggle a number of characters well, and everyone gets their moment to shine, especially Clayface.  Some are more powerful than others, as I still feel the least attached to the Orphan/Spoiler plotline with the evacuated Gothamites.  I’m hoping we’ll get more crossover mini-events like this down the line, with a core writer like Orlando working with individual writers.  The cohesion has been great.  Riley Rossmo continues to impress.  His style is a great balance of being grounded but maintaining a wistful nature.  It’s ok to remember you’re drawing a comic book, and Rossmo embraces it.  The panel structuring is interesting and the design is dynamic.  I’m hoping he gets to spend more time with the Bat-family in the future.

That does it for the monster men, at least for the main Batman title.  Everything will get wrapped up over in Detective Comics next week, and we’ll be back here in two weeks for the thing we’ve been waiting for since the Rebirth one-shot: Mikel Janin’s Batman.