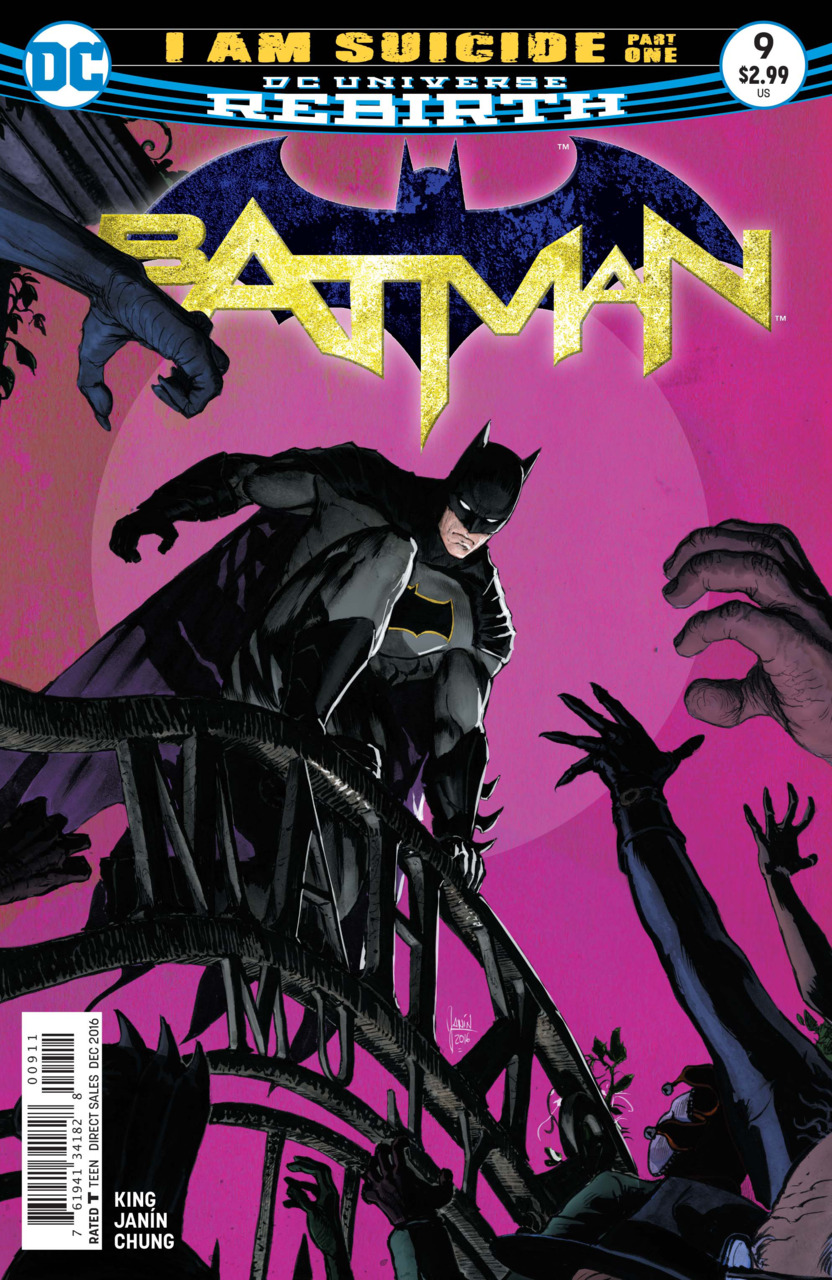 We’re past the Gothams.  We’re past the Monsters.  Now is the time for Suicide.  The ninth issue of Tom King’s Batman run kicks off with an abbreviated origin of Bane.  Quick, powerful, and pointed.  He grew up in prison in Santa Prisca.  It sounds like a beautiful place.  It’s not.  His youth was spent trying not to drown, while desperately wanting to give in to drowning.  The story of his youth is being recited to Psycho Pirate, who Bane “acquired” from Hugo Strange during the “I Am Gotham” storyline.  His reasoning for this acquisition is brought to light immediately.  He’s trying to kick his venom habit, and the Pirate’s emotional manipulation will help him fight off the urges.  Not a bad plan.

Back in Gotham, Claire/Gotham Girl’s condition is not improving and the mission to recover Psycho Pirate is underway.  Batman, Commissioner Gordon, and Jeremiah Arkham are touring Arkham Asylum where Batman is cherry-picking his own team to go to Santa Prisca.  The first is Arnold Weskler, the Ventriloquist, making (I think) his second appearance in the post-Flashpoint continuity.  It’s nice to see him up and about, his death pre-Flashpoint was disappointing.   There is no Scarface, though, but he agrees to join the team anyway.  An interesting first choice, to say the least.  Without his dummy/abusive boss he seems calm, but not exactly stable.

As the trio moves through the Asylum they discuss how many patients are being conscripted into the group and we get to check in on some of the inmates.  While the “I Am Gotham” epilogue featured a lot of throwbacks, we get a look here at Mitchell Mayo, the Condiment King, one of the more bizarre of the rogue’s gallery.  Also, quick appearances from Kite Man, the Tweedle brothers (who just made their debut on TV’s Gotham this week) as well as Calendar Man.  Jeremiah Arkham is drawing a hard line against an unknown recruit as they pass the cell of the blonde Jane Doe who appeared in May’s DC Universe Rebirth special, who appears to be Saturn Girl from the Legion of Superheroes.  She fogs the window on her cell and makes the Legion logo.  Not sure what’s going on there, but I love it and want more.  This quick scene brought a lot of character to this book.

Ben Turner, Bronze Tiger, is the next recruit.  Most famous for his involvement in pre-Flashpoint Suicide Squad, he’s been seen sparingly in the New 52 era of comics.  I believe he was last in the League of Assassins, but I could be wrong.  Regardless of his past, the one thing that remains certain is that he can still best Batman in hand-to-hand combat.  Since we haven’t seen much of him, I’m interested to see how they are going to characterize him going forward.  He and Batman seem to be on good terms.  Batman even smiles.

The twist to the issue comes next.  They group is at the next recruit’s cell.  Jewelee.  Of Punch and Jewelee fame.  I’ll give you a minute while you Google.  Jewelee’s been catatonic due to the absence of her partner Punch.  Information about Jewelee was leaked by the GCPD in an effort to draw her partner Punch out of hiding.  It worked, as Batman deduced Punch has been masquerading as Gordon for the entirety of their Arkham sojourn.  Getting them on board is easy, they get to be together if they come.

Everything is coming up Batman though, as he is able to use the fact that Punch infiltrated Arkham Asylum to blackmail Jeremiah into letting him have that last group member they’ve been dodgy about.  Batman speaks calmly to the person in the cell, masked face and donned in a straight jacket.  There’s obliviously a relationship there.  He’s on a mission, one that probably only they can understand.  This person on death row for 237 counts of murder.  Catwoman.

There was a lot packed in there.  I see why writer Tom King said so many beats from this issue will turn into their own stories down the road.  The best thing I can say about this issue is that I feel like it really brings the Batman history to the forefront.  It feels like he’s been doing this for years upon years, and that he has a deep, rich history.  I love that that’s coming back.  It was present in Snyder’s run, but not as artfully done.  While I was looking forward to previous installments in this book, I can honestly say I’m excited to see where “I Am Suicide” is going to take us.  This has the makings to be a standout story if the team continues to execute this well.

Speaking of the team, I cannot say enough about return artist Mikel Janin.  We got a taste of his work in the Rebirth special, but this arc will be his true Batman debut.  For an issue that was mostly talking heads, Janin was able to keep  things captivating with great panel design and camerawork.   His work is reminiscent of a cleaner Greg Capullo, who I thought drew the best Bruce Wayne around.  Janin is giving him a run, though.  June Chung has taken the reigns on coloring from the astounding Jordie Bellaire and the work hasn’t dropped a beat.  Things are fresh when they need to be and even the darkness isn’t overpowering.  There’s a great balance.  Also, I’d be remiss if I didn’t compliment Tim Sale on his variant cover for this book.  They haven’t been the greatest, but this one caught my eye.  I’m a sucker for Bane, though.  See you all in 2 weeks!