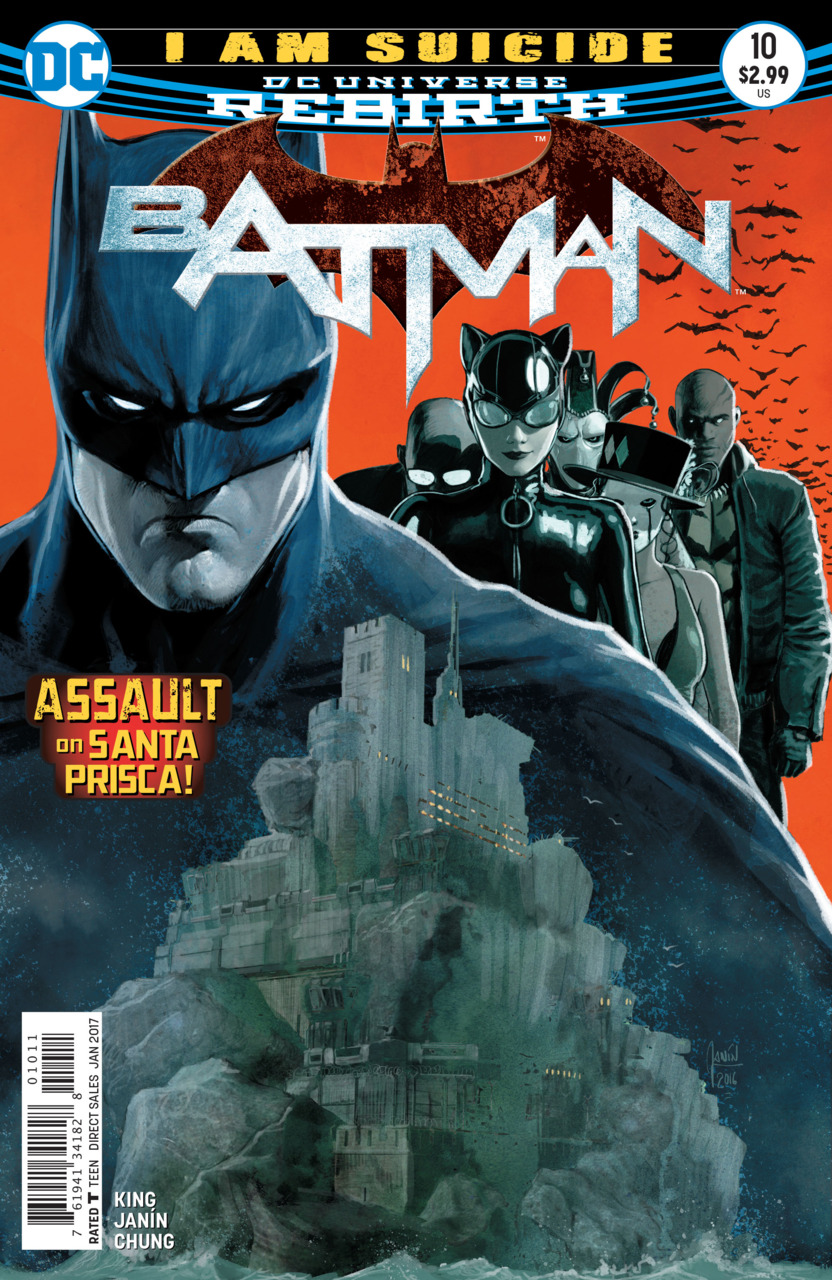 Batman #10 comes with two stories told simultaneously.  The first in the next installment of Tom King’s “I Am Suicide” arc, detailing the storming of the gates of Bane’s island refuge/prison, which while interesting, is somewhat of a backwards step for the series.  The second, and far more compelling story, is that of how Selina Kyle went from talented thief to death row inmate.

This issue’s Mikel Janin cover boasts an “Assault on Santa Prisca” that occurs and is rather anticlimactic.  Upon arrival in restricted Santa Prisca airspace, the Batplane is immediately taken down and Batman is jumped by Bane’s army and taken to their leader.  All the while, Batman repeats the same message meant for Bane.  He’s there for Psycho Pirate.  Hand him over, or face the consequences.  The whole scene plays out quickly and fiercely, but gives little establishment for Batman’s plans.  We know the whole ordeal is obviously a distraction so the team can get on the island undetected, but it is played so straight I couldn’t help but feel like King was phoning it in.  He’s a better writer than that.  The sharp change in Batman’s demeanor had me thinking for more than a few pages that King was playing us again, and Punch was actually in the batsuit leading the distraction.  No such luck.

The brief scene between Bane and the defeated Batman is a high point in the story.  It’s a moody and atmospheric scene with the perfect bit of gravitas for Bane.  Bane’s strength level has been greatly reduced due to the absence of the Venom in his system, but he is still more than capable of gravely injuring Batman’s back before dumping him in the same cell Bane himself spent his youth.  There is little discussion between the two beyond Bane’s posturing and Batman’s repeated mantra.  The art in this too-quick scene doesn’t convey the seriousness of the injury as deeply as it could have. Batman rectifying his spinal issues could have been much more brutal, but Janin played it safe, an odd choice.  In case you doubted it, Batman easily escapes from the cell, opening the back door for Catwoman and the Ventriloquist, who tell him the rest of the team is getting into position.  Plan’s on track.

The second story in this issue, conveyed through Selina Kyle’s words, is played against the backdrop of the main story.  It is the resolution to last issue’s cliffhanger regarding the 237 murders for which she has been convicted.  It’s a fairly simple story on the surface.  The orphanage she grew up in was bombed by a terrorist faction called the Dogs of War from Khandaq.  They had 237 registered members, but thanks to her intervention they are down to zero.  Underneath the gritty details, however, is a poignant assessment of both the similarities and differences between Selina Kyle and Bruce Wayne, as well as their alter egos Catwoman and Batman.  How their own personal tragedies have affected them and whether or not they rose above them, or gave into their darkness.  It’s a powerful letter and a great introduction to Tom King’s introduction to the character.  It looks like he’s really going to be playing the “lovers from different sides of the tracks” angle for the pair.  My only complaint is how this story wasn’t given a full arc.  It could have been amazing, Batman tracking her across the world, always a few steps behind, ultimately having to bring her in.

This is a chief example of my biggest problem with this storyline so far:  Batman is easily the least interesting thing about it.  Bane’s presentation as a damaged man escaping his personal demons while living right above them is terribly interesting, giving depth to what was once an extremely one note character.  Rumor is we’re going to be seeing a lot of Catwoman going forward, so I’m anxious to see how King handles the relationship there, especially in light of her murder spree.  I can’t see Batman overlooking that.  This issue was far from bad, but it was a creative misstep that threw off the momentum from a great introductory issue.  The art was equal parts beautiful and muddled, with the storytelling somewhat out of sync with the narrative.  King and Janin are still finding their footing together, so I can understand their action scenes not lining up as well as their establishing scenes.  Now that this is behind us, I’m hoping for the best going forward.