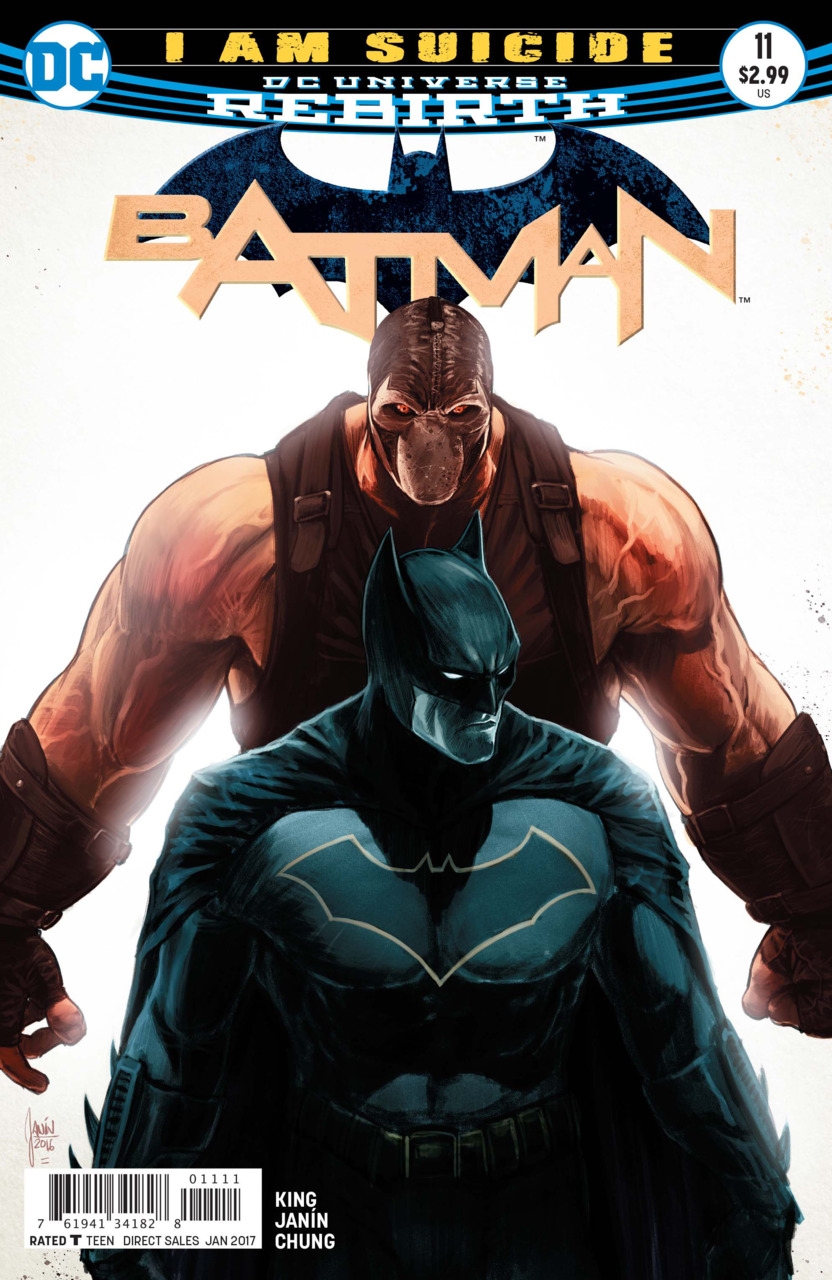 As we dig deeper into “I Am Suicide,” I find myself torn.  Issue #11 brings us the third installment, wherein things happen, but not really in the way I was expecting.  We open with a flashback to the apprehension of Catwoman by Batman, seemingly putting to rest the popular theory that she didn’t actually kill over 200 people.  Looks like she may have done it after all.  The scene was quick, but it didn’t strike home like it could have.  Back at Santa Prisca, the team splits up and the next phase of the plan goes into motion.  Catwoman and Ventriloquist go after Pscyho Pirate, and Batman gets into place for his showdown with Bane.  While they get into place, the remaining team members take the direct approach, requesting an audience with Bane himself.  Bronze Tiger presents Punch and Jewelee as captives returned to Bane in exchange for a favor.  Everything seems to be going smoothly, until the requisite twist.  More on that in a bit.

Let’s talk about Tom King for a minute.  This is arguably the biggest stage he’s been on in his career.  Batman is one of the flagship titles of DC’s Rebirth line.   King turned a lot of heads in 2015 and 2016 with dramatic character pieces like Omega Men and Vision.  The abilities he showed us while on those books, as well as the Bat-Family book Grayson, were outstanding.  His grasp on storytelling and turning smaller books into critical darlings earned him this shot at the core Batman book.  I feel like he’s having trouble balancing the stuff he has shown a great aptitude for with the larger scale he’s shooting for.  This has resulted in an off balanced book that has had great moments, but largely finds itself missing the mark.  I mentioned it before, but combining “I Am Suicide” with the Batman/Catwoman story looks like a misstep.  Neither story has gotten enough room to breathe.  I have no doubt that King will eventually find his footing.  I hope he gets back to focusing on what made his other work as great as it was.

Back to the story at hand, though.  You may have felt the earth tremble during the close of this issue.  It may have been residual shockwaves from the Cubs winning the World Series a couple weeks back, but more than likely it was fan outrage.  While not a heel turn the caliber of what Marvel recently did to Captain America, the close of this issue did have Catwoman rat out Batman’s plan to Bane while making short work of most of their team, gravely injuring, if not killing, them.  A reaction shot of Batman during the proceedings leads me to believe that this wasn’t part of his plan, but I’ve been wrong before.  So, that begs the question, if this isn’t all part of the plan, how is King going to write himself out of this one?  Also, why is the Ventriloquist even involved in this story?  I’m guess he’s going to tie everything together in the end.  There’s a lot we’re not being shown by our heroes, so I’m more than willing to give King some leeway in explaining this one.

The highlight of this book continues to be the glimpses into the psyche of the characters we get through King’s dialogue.  The discussion between Ventriloquist and Catwoman while navigating the sewage system of Santa Prisca.  These glimpses are what give me my hope regarding the outcome of this story.  Catwoman opines on how her dark side has firmly taken ahold of her, unlike Ventriloquist who is free without his catalyst, Scarface.  Every bit of her dialogue points to her eventual betrayal, showing her to feel backed into a corner by her past actions.  It’s a powerful story I want to see more of.