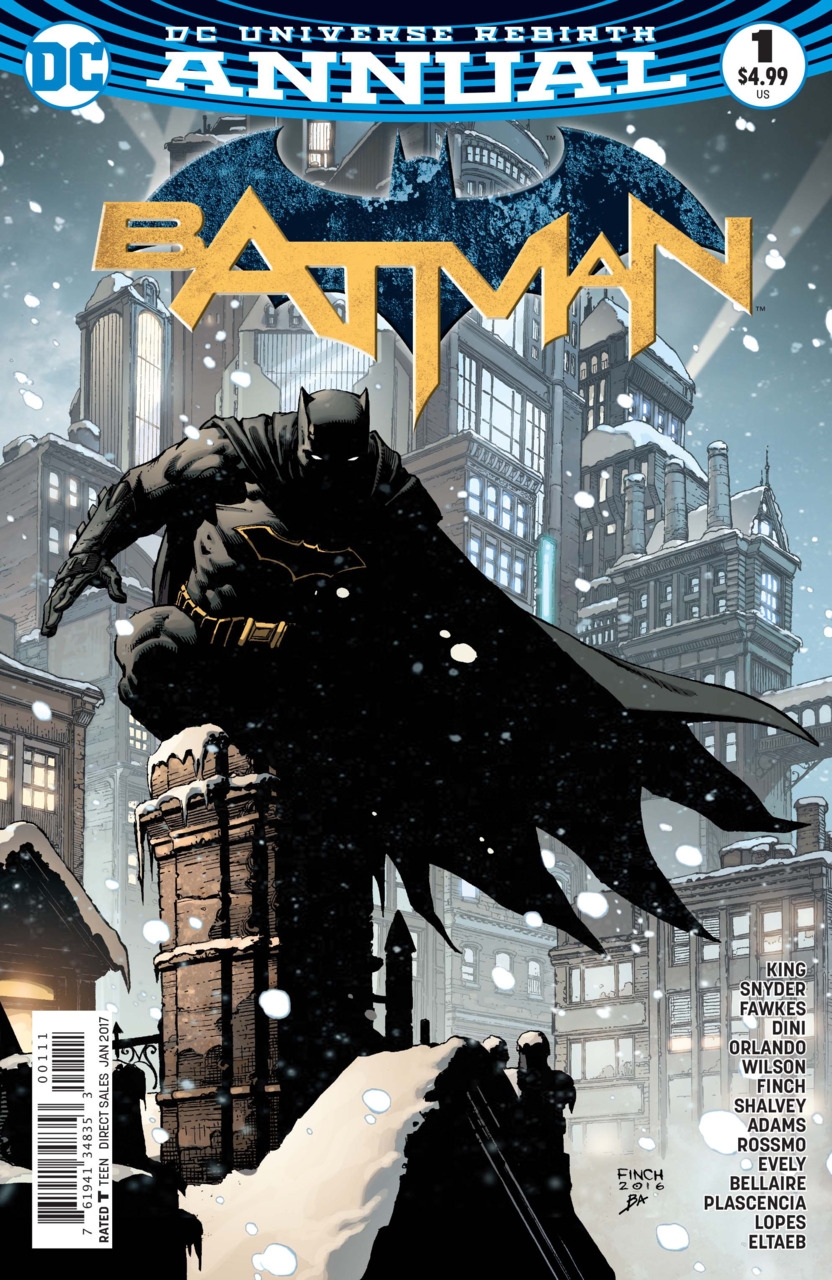 The annual has been a time honored tradition throughout the years.  It’s a versatile issue that can be used in a number of different manners.  Batman Annual #1, for example, provides a number of short vignettes, each focusing on different characters and a different quick story.  Also released this week, Superman Annual #1 follows the opposite approach, opting for one long story.  Both are more than acceptable styles, but let’s dig into Batman’s series of shorts a little more deeply.

We kick off with “Good Boy,” scripted by Tom King with art by David Finch.  This story focuses on the leftovers of one of Joker’s actions.  He’s left behind a single dog, obviously deeply disturbed from his time involved with the Joker, who is adopted by Alfred.  That’s right, it’s the Rebirth first appearance of none other than Ace the Bat-Hound, stalwart crime fighting companion of the Caped Crusader from 1950’s and 1960’s Batman comics.  A lot is said about how stubborn the Batman character can be.  Read this story and see how stubborn Alfred can be.  It is a very sweet story that highlights Tom King’s strengths as a writer.  A dash of humor and a good amount of heart go a long way to making a story memorable.  This is more of what I want out of King’s run on the main Batman title.  There is a deeply emotional story lurking just below the surface that I greatly appreciate.  Also, you can’t go wrong with Kite Man.  Hell yeah.

Next up, Declan Shalvey draws a story written by former Batman writer Scott Snyder with Ray Fawkes.  “Silent Night” focuses on a relatively quiet moment during a winter’s night in Gotham.  Batman enjoys a breather when the sudden arrival of a number of acrobats at a Gotham landmark turn out to be nothing more than a flash mob, entertaining the crowd for the holidays.  It’s a nice little story, though it seems to retread some of the same ground Snyder did in his New 52 epilogue story.  Shalvey is the star here.  He has a great style and eye.  I’m looking forward to his team up with Snyder on a future arc of All-Star Batman.

“The Not So Silent Night of the Harley Quinn.”  You had me at Paul Dini and Neal Adams.  Dini returns to Harley Quinn, easily his most successful creation (which he shares credit with Bruce Timm), and teams with seminal Batman artist Neal Adams.  There are echoes of the Snyder story here, with Batman finding himself on a wintery Gotham night with no pressing matters to handle, but the wild card that is Harley Quinn freshens things up a bit.  Her banter with Batman was amusing if nothing else.  This version of Harley is much closer to the original thanks to Dini, eschewing the Deadpoolized, 4th wall breaking Harley in favor of a more grounded, humorous take.  Adams art may not be what it used to be, but it’s always good to see him pop in and do some work on the character.  This is the “fun” story of the annual, and it does its job admirably.

Second to last, we have Steve Orlando and Riley Rossmo presenting us with “The Stag,” the odd duck out of the group.  Still holiday-related in nature, this issue does more to tie into future Batman events than the others.  Plus, we get another Rebirth first – the debut of Minister Blizzard.  Created in 1944 by William Moulton Marston (most famous for another of his creations, Wonder Woman), Minister Blizzard is yet another ice-themed villain in the DC pantheon.  Here, he’s used as a bit of a comic foil against another Bruce Wayne style millionaire.  There are some layers to this story, sowing seeds for what eventually will come in 2017.  It looks like they are going to be playing with the concept of Bruce Wayne again, something largely absent in King’s work so far.  As the Batman, he protects the city, but as Bruce Wayne he can help in many different ways.  Snyder played with this a little during the “Superheavy” arc.  At the end, we’re introduced to the new threat – The Stag.  There are a lot of questions and absolutely no answers given, so it looks like we’re going to be left in the lurch as to who or what The Stag is until the aforementioned 2017 storyline.  I’m hoping Orlando and Rossmo are involved, though.  Orlando’s mini event “Night of the Monster Man” received mixed results, but his ability to write a solid story can’t be argued.  And Rossmo is always nice to see.  He has a sketchy, unfinished approach that can be used well with the overall Batman style.

Last up is “The Insecurity Diversion” from Scott Wilson and Bilquis Evely.  I was off put from the start, trying to figure out who Haunter is.  As far as I can tell this is a brand new character, which I wasn’t expecting.  This section of the annual I’m probably the toughest on.  There’s a lot to like here, but it seems rushed.  The introduction of Haunter and the establishment of the fear toxin being let loose on Gotham happen right out of the gate and the story doesn’t let up.  I can’t help but feel it would have benefited from getting an entire issue dedicated to it.  The Haunter is an interesting character with a surprising powerset, she can kill you if she comes in contact with your DNA.  Also, Scarecrow briefly shows up.  Everything’s tied up in a seemingly nice bow by the end, but I would have liked more.

So, that’s that for Batman Annual #1.  They’ve really given us something for everyone in this book.  There’s laughter, there’s tears (I’m an animal lover and “Good Boy” hit me right in the feels).  There’s the promise of great things to come for Batman in 2017.  I have to say, it’s a great time to be a Bat-fan.