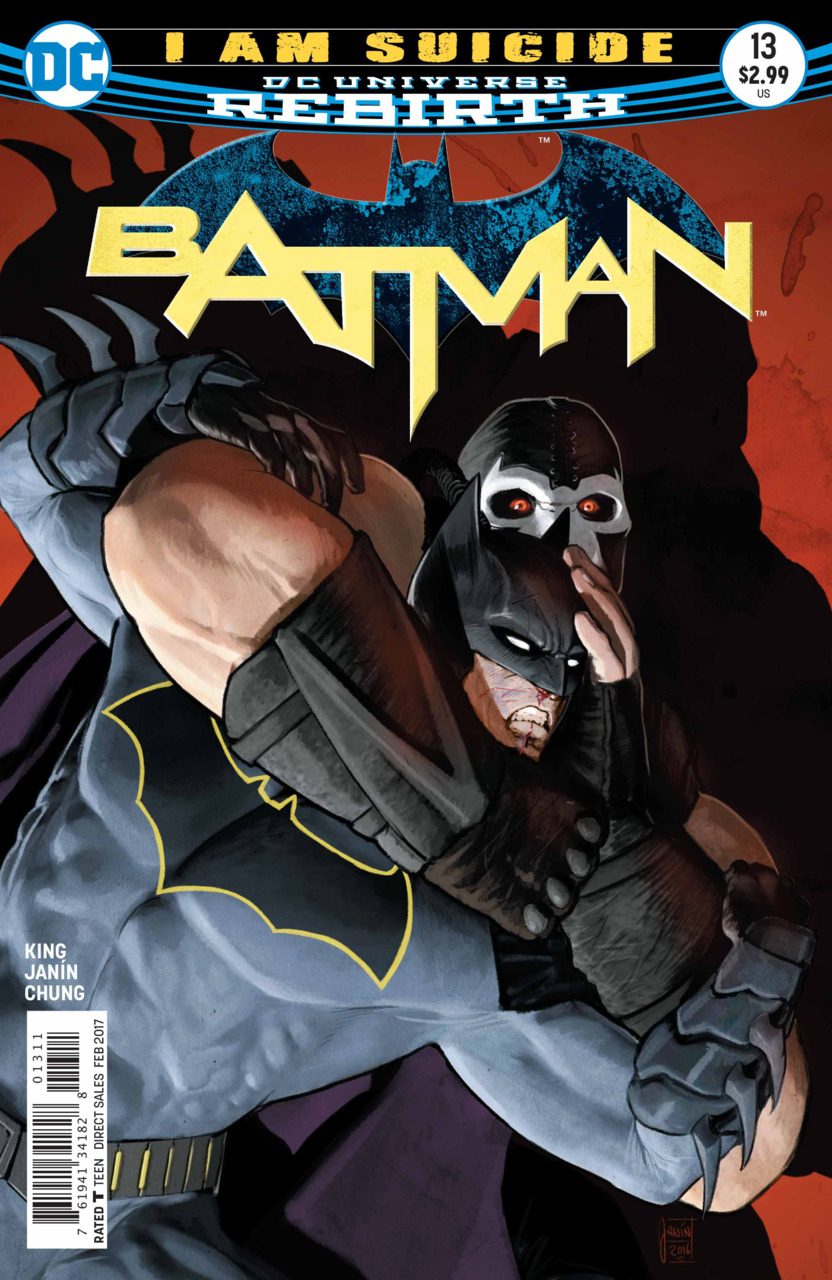 Again, we find ourselves at the closure of a Tom King Batman story arc.  Batman #13 brings the conclusion to King’s sophomore effort, “I Am Suicide.”  I find myself in a similar place as I did with the ending of King’s first arc, “I Am Gotham.”  There were a lot of things to like, but the overall packaging of everything was disheartening.  Let’s dive into the specifics.

Story-wise, everything worked out as expected.  Batman was always in control.  His team isn’t dead, they’re exactly where they needed to be.  Catwoman isn’t flipping sides, it was all part of the con.  We saw it coming a mile away, despite some misgivings.  I’m still curious as to why Batman said “No.” when Catwoman initially “betrayed” the team.  It probably warrants a re-read to see the arc as a whole.  Anyway, the story unpacks itself cleanly enough, getting everyone in place for the finale.  Punch and Jewlee are on escape plan duty, and Bronze Tiger is delivering the Ventriloquist.  Batman and Catwoman, of course, are on “damn back breaking” duty.  Batman gives the signal, so to speak, and the pieces fall into place.  The best reveal, however, belongs solely to the Ventriloquist, whose presence was always strange.  It was his job to get close to Psycho Pirate as Batman knew he couldn’t be controlled by the Pirate.  He was already being controlled by Scarface, who, despite not having a body, makes a very memorable appearance at the close of the story.

There are a lot of good things to say about the actual ending of this story.  The dialogue is fun without being over the top, and the actual story progression solid. All in all, a successful conclusion.  My biggest gripe, however, is the path that took us to this point.  The story arc had a solid start and interesting setup.  It completely derailed when a far more interesting subplot took over in my head.  The next pair of issues seems to be geared towards resolving the Batman and Catwoman relationship status, so I’m hoping King really lets himself shine there.  I am also slightly disappointed that a story billed as “Batman forms his own Suicide Squad” didn’t really feature much in the way of action, at least on the team level.

The most important question, however, is did we know Bane was naked the whole time?  I knew he was without shirt or his trademark mask, but I thought he was still at least wearing the pants portion of his singlet. This makes the scenes of him sitting in his throne room with Catwoman and Psycho Pirate a little on the weird side, don’t you think?  I suppose his nudity falls in line with his overall character arc, though.  He is reborn, he is clean and free from his addiction to Venom.  Batman and Catwoman dispatch him easily enough, which leads to what is probably my favorite scene from King so far – the talk between Batman and Bane where Bats tells him in no uncertain terms to forget about looking for revenge.  Bane, of course, will be ignoring that advice, seeing as how “I Am Bane” begins in February.  The last image of Bane, filled with rage, demanding Venom, is perfect and really amps me up for the next Bane story.  Growing up in the 90’s, Bane’s always been a favorite character of mine.

Another arc, another uneven presentation.  All of the elements were there in “I Am Suicide,” but the execution faltered.  Mikel Janin really saved this arc for me.  His art has been phenomenal and I cannot wait for his next run on the book.  “I Am Bane” features the return of the competent David Finch, but Janin’s art and presentation bring a wholly different  much more dynamic feel to the pages.  His panel layouts alone bring this score of this book up.  I can’t say enough about the guy.  That’s it for “I Am Suicide.”  You were fun in parts, but I’m glad you served your purpose and are in the past.