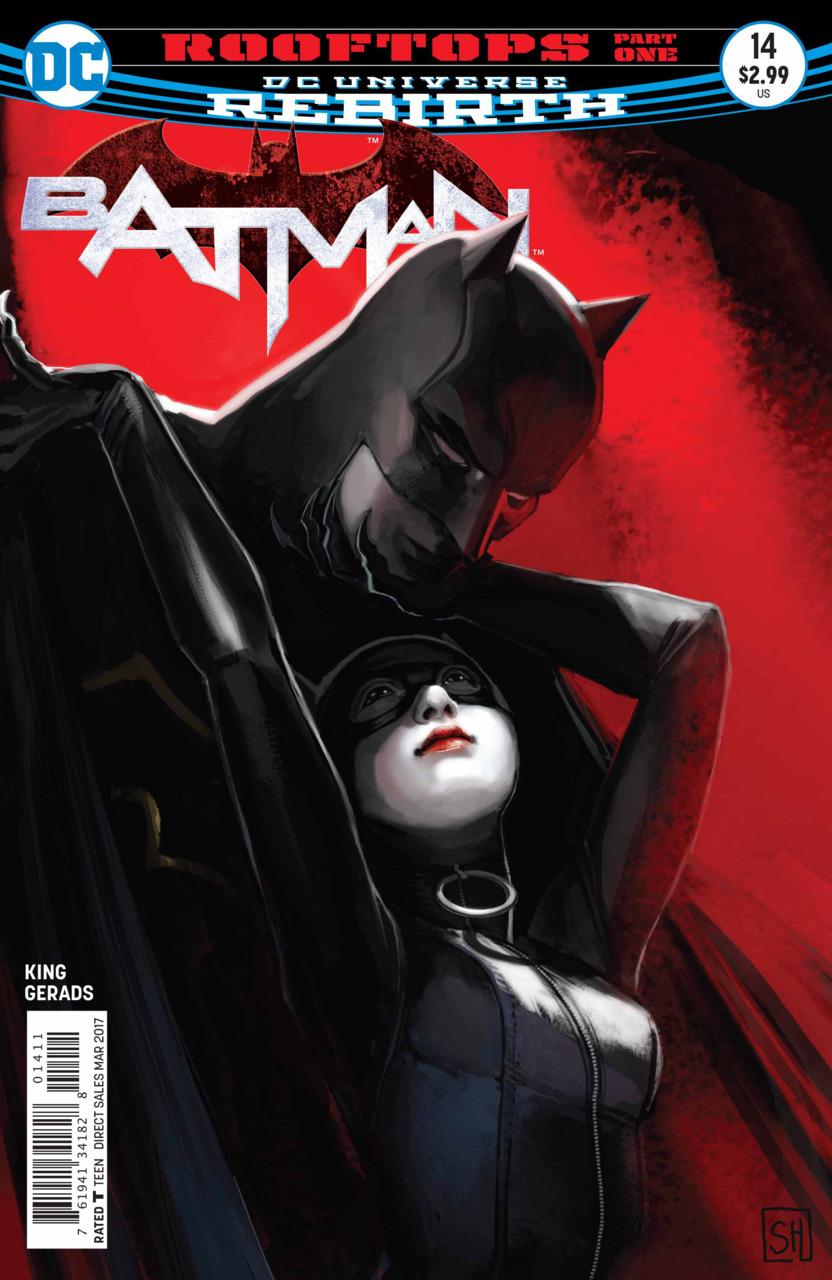 I’ll always remember the first “fancy” wedding I attended after leaving my small town life behind.  Between courses we were served a lemon sorbet as a palate cleanser.  My then-girlfriend had to explain to her rude boyfriend what a palate cleanser was.  The point of this story?  Tom King’s “Rooftops” is a much needed lemon sorbet, waking up our taste buds for the next arc.  It’s no secret I’ve been largely, while I wouldn’t necessarily say disappointed, definitely underwhelmed with the performance of King on the core Batman title.  His output so far belies the talents I’ve seen in other titles he’s produced.  In this down time between the “I Am Suicide” and “I Am Bane” arcs, King is teaming with Sheriff of Babylon artist Mitch Gerads to bring us the next chapter in the ongoing saga of Bat and Cat.

The Batman/Catwoman dynamic has been one of my favorite aspects of King’s work on the title so far.  I’m happy that their relationship is getting the focus it deserves.  He is really drilling down their similarities and differences in a matter that feels fresh and broken in at the same time.  The story begins with the good news – thanks to her recent efforts, Waller and the president have agreed to taking the death penalty off the table for her recent (justified?) murder spree.  She’s still going to  be locked up for a long, long while.  What follows is an evening with the pair as they battle through a deluge of Batman’s more obscure rogues gallery.  Including, of course, Kite Man.  (Hell yeah.)  The evening culminates with Catwoman giving Batman her diamond stash to rebuild her orphanage.  That’s not where we leave our characters, but we’ll give them their privacy.  The evening all comes down to whether or not Batman turns Catwoman over, or more accurately, whether or not Catwoman allows herself to be turned over.  We’ll find that out in 2 weeks.

The story is near pitch perfect, and is full of exactly the kind of heart and levity I know King is capable of.  I hope this isn’t a one-off, and that King has found his footing with the characters.  I’ve even grown accustomed to the “pet names” they have for each other.  I enjoy that this story is scaling down the character in a way we haven’t seen in a long time.  It’s refreshing seeing him  out on patrol, dealing with some thugs.  No super powered Gotham twins, no Mr. Bloom havoc, no mechanized Bat-suits.  Just Batman, Catwoman , and the rooftops.  It’s a place the series can really grow from.  This is the highlight of King’s run.

Gerads does a serviceable job with the story.  It is a fairly quiet story with more implied action than actual action, so there isn’t much for him to really do.  The layouts are beautiful, especially every time we see the sky, uncharacteristically starry for a city of Gotham’s size.  While I’m not the biggest fan of Gerads, I have nothing to really complain about.  I suppose I’d have liked to have seen an artist with a cleaner approach tell this story, but that’s a minor gripe on an otherwise great issue.

I’m looking forward to the next issue more than I have for any other in King’s time on the book so far.  I’ve also found this story is gearing me up for “I Am Bane” more than I expected.  It looks like it’s going to be a dramatic story.  We’ll find out after we finish this sorbet in two weeks.