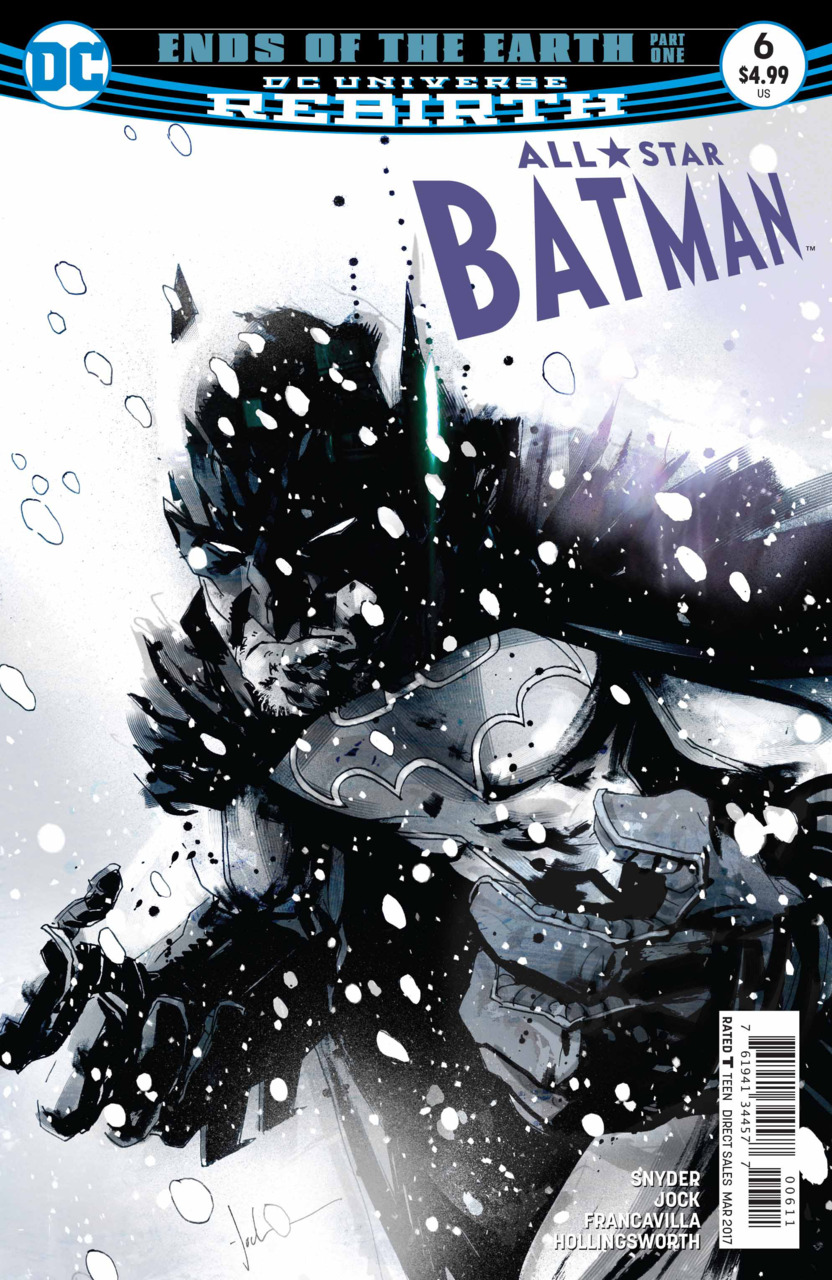 Synopsis: In Alaska, a blizzard is whiting out everything. Batman marches his way through the frozen tundra as we get a little backstory on Victor. When he was a child, he had to memorize and recite poem to the class. He looked through a book his mother had given to his father when they were dating. When asked why THAT poem, Victor told his father that it was because it was short – easy to memorize… but that wasn’t the reason. The poem that many found to be a bit too grim for such a young boy, but as we all know, art is subjective to its observer. And Victor found that piece of art to be beautiful.

Batman finds a door in the white of snow, heats it up, and kicks it in. “Victor!” he screams, but he hears nothing… just as he has for hours. Corpses frozen stagger the room. All of them still standing. This happened quick.

Finally out of the darkness, Batman hears something… squeaking of metal. Shimmering bodies, slowly move toward him. From his protective suit, he blasts heated-copper batarangs. He built this quickly before he left. He didn’t make it perfect. He lets it heat up for too long, and it burns his arm. This leaves him vulnerable. Fighting the cold in the absence of heat, his suit shuts down.

“Welcome, Batman…” a mechanical voice reaches out from the biting cold, “… to the top of the world.” Freeze has his frozen zombies rip the suit off Batman’s body. Batman says that he’s come here to talk. Freeze doesn’t believe him. Batman warns of an unknown squadron making their way to burn this place to the grou-Freeze interrupts him. “Do you know who these people are up here with me? These new friends of mine?” “The dead.” “No, not the dead. The dreaming.”

Victor is reanimating the corpses of still living people. They went into cryogenic stasis years ago so they could wake up to a better world. Until then, they sleep; they dream. Victor dreams too — of a new world. A better world. He plans on thawing out an ice core that is nearly nine million years old with an incendiary bomb. It will release countless amounts of deadly bacteria onto the world, killing everything on the planet. That’s when Victor, Nora, and his dreamers will awake from their protective chambers. They’ll have a new world. Batman informs Freeze that Nora will scream when she sees the monster he has become. She was passionate about her work — her dance and art. She loved Victor for his passion. But the fire that once burned within him cooled off. She’ll find him too cold.

Victor disagrees, apologizes that Batman will be the first to die from the bacteria, and closes the chamber door. He dreams. Of the world being frozen over. Everything wiped from the face of the earth. And he wakes. To a tundra paradise, with Nora and the other survivors. They will start a new world. A better world.

And he wakes. Batman had a virus hidden in his bloodstream that, when his skin was exposed it would go airborne, killing off the bacteria. Freeze beats Batman in anger, “Hear her screaming yet?” Batman asks. Victor freezes (ha!), because he can hear screaming. He rushes over to her pod, thoughts racing through his mind as to what could be wrong. But Batman hits him, and as he drags him back to his chamber Victor realizes what the sound is. It’s the planes overhead and the firebombs they are dropping. Batman throws him into his pod, jumps in, and closes the door behind him. Victor screams as his newest hope to save his love goes up in flames. He remembers the poem from his childhood. He screams it now. He screams it loud… until his throat burns.

“Some say the world will end in fire,
Some say in ice.
From what I’ve tasted of desire
I hold with those who favor fire.
But if it had to perish twice,
I think I know enough of hate
To say that for destruction ice
Is also great and would suffice.”

Thoughts: Every time Jock and Snyder get together, great things happen. Snyder delivers an amazing one-off story of one of my favorite villains, Mr. Freeze. Something I wondered about coming into this story, but was greatly relieved while I read it, was that Freeze followed suit with Rebirth. Snyder realized the mistake he made with the changes to the character last time he handled him, and did a reset. We get to dive into Victor as a character, and see his hopes and dreams dashed in front of his eyes. Jock’s art is just beautiful. I love the way he uses his shading, and the fact that there isn’t really much of a medium makes things pop. It’s either colored, or it’s straight up black ink. Matt Hollingsworth’s colors are a perfect match for Jock, because he knows how to play the page. He stylistically chooses to stick to one color for most of the page, peppering in some white in all the right places, and then just a touch of a single “pop” color. Hollingsworth has consistently been one of the best colorists in the business for a long time, and he continues that trend here. The guy is super diverse in what he can do, and always treats his craft like an art in-it of itself. Steve Wands blew me away here. His letters were amazing. If you have a friend who is new to comics, but into novels, I feel like this would be an easy transition for them. There are no word balloons. He has simple text, putting it in boxes when it makes it easier to read. There are three different types of text; white text (an unknown narrator), black box (usually used in Batman’s dialogue), and pink (Victor’s dialogue). It added another layer to the story that played out beautifully.

Backup Synopsis: Riddler has set up a crossword puzzle using residents of a building and their windows. Batman tries to solve it from across the street before it blows. They only have 30 seconds left and Duke is hanging from the rooftop, ready to save as many as possible.

Two days ago, Batman is explaining to Duke at Arkham how the Riddler always has something planned on the anniversary of Zero Year. Batman goes to talk to Nygma, while Duke waits in the hall. He stumbles across a deformed Daryl Guttierez (The original Mr. Bloom?), and he starts to hurt Duke somehow through the special cell.

Back to the building, Batman makes a wrong guess on the crossword. Duke dashes down the building to save someone, but the building explodes before he can do anything.

Backup Analysis: It was good to see Francesco Francavilla back doing Batman. I love his style, and I think that this may be some of his cleanest, smoothest work yet. His work is usually pretty loose, but he tightened things up here. I don’t know if I like it more or less than what I’ve usually seen, but I still liked it. This story is seven pages long, and I wonder if it would have benefited by having another page or two, because I found Snyder’s story lacking here. Again, it’s tough to tell a story in such a limited amount of space, but it’s even tougher to critique a story that is only seven pages long, so I may change my mind when I have the whole thing, but for now I am confused as to Daryl’s involvement.