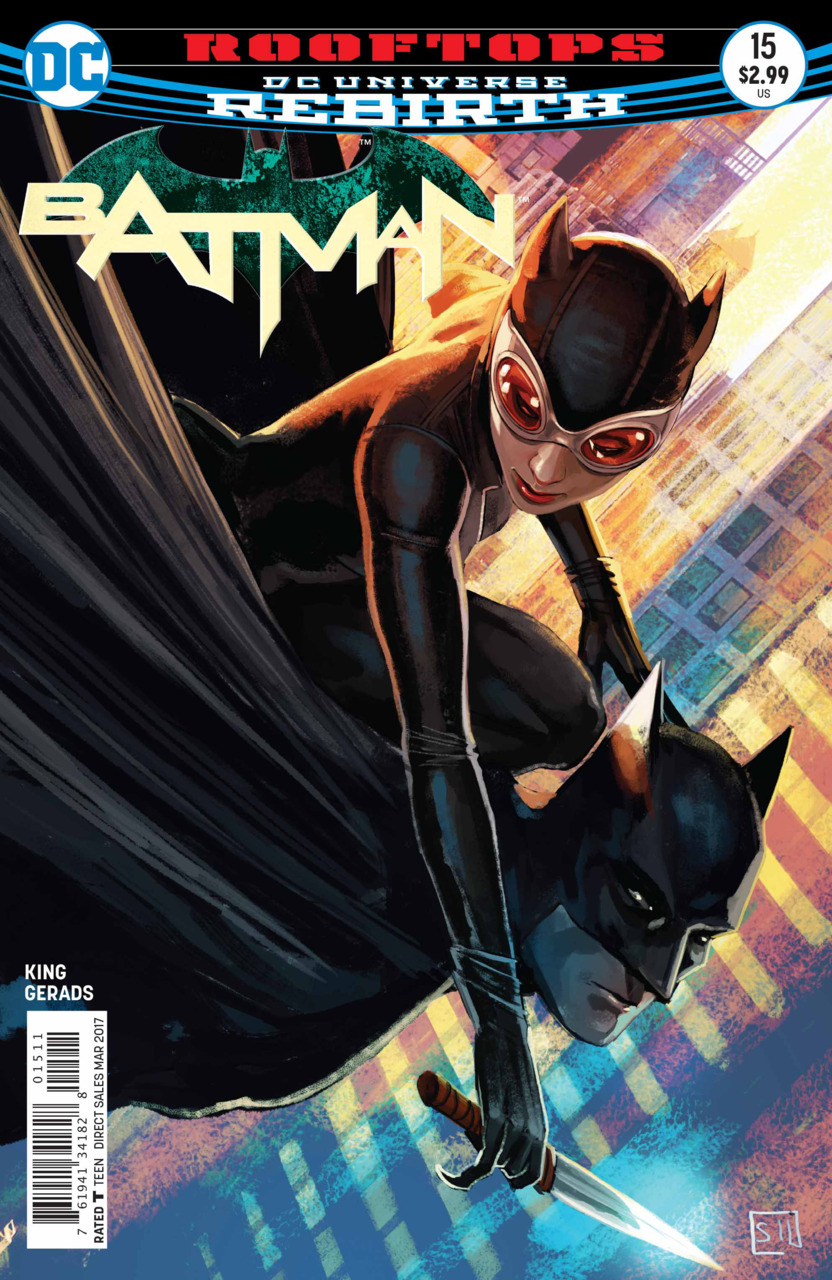 Who’s ready for a little trip down memory lane?  Today brings us the close of the two part Catwoman-centric story “Rooftops,” wherein we actually get answers.  And closure.  It’s a weird concept, I know, but bear with me.  This issue is a treat.

We pick up where we left off, albeit several private moments later, with Bat and Cat enjoying one another’s company and reminiscing about their first meeting.  Batman remembers it as the story presented in Catwoman’s first appearance in 1940’s Batman #1, where he stopped her from stealing diamonds and fell under her spell.  Catwoman remembers it as the story from Frank Miller’s “Year One” in 1987’s Batman #404 where he rescues her and her friend Holly.  The scene works well as they recount the stories intercut with panels reminiscent of the art styles from both those stories, with modern touches.  It culminates with Cat dropping the L-word.  Love.  Bruce says it back.  And smiles.  A simple, beautiful scene.  I want these crazy kids to work things out.  If it only weren’t for the jewel thieving.  And the murders, of course.

The romance ends quickly, however, as Catwoman does what we’ve been expecting her to all this time – she runs, with a demure “catch me” she’s gone.  Batman uses his two most reliable allies to track down whatever information he can, determining that the answer had something to do with Holly Robinson, the name she leased the apartment under and the girl he rescued in her version of the night they met.  After dropping in on one of Jim Gordon’s more introspective moments he gets what he needs, an address.  He goes to Robinson’s apartment (leased under the alias Catherine Ann Turley) expecting to get a line on where to find Catwoman, but the detective gets much, much more.

Blinded by love, Batman says a lot of things.  He knows Catwoman is innocent and that there is something bigger going on.  This is an uncharacteristically emotional depiction of Batman that is refreshing.  Too often writers totally glance over the fact that he is a man who is guarded for a reason.  He explains that wants to help her, because he loves her.  Because she understands him and that isn’t something he takes lightly.  Not many people understand the Batman, you see.  Holly goes for her phone to make contact, but instead gets the drop on Batman and cuts him.  He staggers towards the window as Alfred radios in to let him know that Catherine Ann Turley has a flight leaving for Kahndaq within the hour.  He falls, but Catwoman is there to save him.

What follows is a great piece of story-telling, bringing the story of Catwoman around full circle from when we first saw her in Batman #9.  The truth is revealed.  Catwoman did kill those people, only tangentially, though.  She trained Holly to protect herself.  With those skills, she killed the people responsible for the fire.  All 237 of them.  As the surrogate sibling, Catwoman took the blame.  That’s what she does.  She saves people in her own certain way.  With that, she is gone.  Back to the Rooftops.  We close on Batman, fully processing the night, and how Catwoman managed to steal it from them.

These words can’t do this story justice.  If you’re just reading this for a recap and some witty commentary without picking up the actual story, get out there now and track it down.  This story is the best Batman has been in Rebirth, and for a good chunk of New 52.  I consider this the first perfect issue from King and company.  It’s emotional and beautiful and more than worth your time.  I’m excited for “I am Bane.”  King has shown that he has the emotional grasp on the storytelling that was seemingly absent from the previous issues.  I’m hoping he can blend that with the action storytelling and drop another classic onto our laps next month.  The pieces are in place for something great.